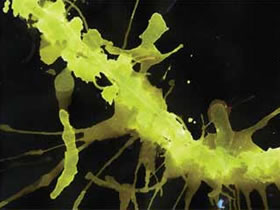 Mikrosolke, anarchic manipulators of narrations, were born from the meeting of Unz, Tatiana and MM . It is very difficult to explain (and understand) what they do. First of all, we must say there is not a “Mikrosolke” recipe”. It is in fact an improvisation project coming out of fun, sometimes sick, in building fragile (drenched too) bridges between audio and video worlds.

Mikrosolke’s performances are a new wave in the world of Italian audiovisual performances, lately worryingly oriented towards lounge-atmospheres fundamentally inoffensive. Their way to present on stage breaks the mould: to the cold posture peculiar to Tatiana’s and Unz’s laptop performers the unpredictable physicalness of MM (member of Mercoledì and Newtone 2060 too) who, between screams and sweat sometimes literally seems to fuck with the instrument (which can be a mixer and a couple of broken record players, a piano or some slide projectors) and sometimes it seems she is about to take off.

Their performance is an underground dirty and infected splinter, the sort with an unpredictable trajectory able to carry you high towards lyric and acid spaces or to make you sink into brutality so as to make your ears bleed. We asked Unz and Tatiana to tell us about their way of working, focusing on their performances rather than on their techniques and aesthetics choices. In their work it is in fact quite clear that those aspects are of secondary importance and that what counts is their energy during lives.

Bertram Niessen: How do you create your narrative path? Do you have an outline first or do you start working in lab and then develop the whole thing? I am really interested in understanding how you manage to find a balance between experimentation and availability

Tatiana: Actually, I think there is not a true answer to the two questions, as our relation is casual, rather human than collaborative. We haven’t fixed meetings, we don’t work constantly, we haven’t a project or an idea of career and we haven’t any logic mechanisms of production. The “Mikrosolke” entity itself hasn’t a fixed identity, but it lives in an absolutely indefinite time and space. I didn’t even know I was part of it until a stranger told me. The same is for the availability: we don’t care about it. There is no difference between a happy customer and an unhappy one. What comes out of our performances is always good. Actually, until present, we have never presented a work twice.

Unz: I believe the truth is in the middle. We have an outline that can be changed but we must have some starting points. Then the elaboration in lab and the combination of the things is fundamental to approach the different ideas and points of view created during the “solitary production.

Bertram Niessen: for instance, Unz’s choices in sound don’t meet everyone’s taste, but what comes out can be enjoyed by “outsiders.”…..

Tatiana: To me, we are not given to know.

Unz: I think I have the builtest part of the three of us, the most controlled and rhythmic one. The choice and the creation of sounds are always connected to a private and emotional research on the project rather than to techno-musical needs

Bertram Niessen: How do you act during performances? I have seen MM with Newtone 2060 and Mercoledí many times and I know it is not easy for him to control his exuberance during his performances. How do you make a deal?

Tatiana: We do not. Each one of us has something to deal with. It can be either exuberance, schizophrenia, anxiety or fear. We definitely have a very emotive and sensitive collaboration. I think the trick is to catalyze all the right way. In fact, we rather talk about our mood than our structure of our work. To confirm this, after years of relationship with Mimmo and Nunzio, I am persuaded we play well only when we have the same mental mood. We are not made for programming a performance, but for playing when we feel it. As Mimmo says, we are not someone who can think about getting up and going to work on the morning, leading a “normal” life. When we feel the need to hide in a dark coin, the external reality disappears and we are no more able to do anything else.

Unz: Usually, we don’t make a deal, we let MM’s exuberance be set free, trying to follow the different waves creating from time to time during the performance and trying to give enough room to what we arranged. After all, it is just a question of schedule and then there is always the mixer.

Bertram Niessen: It seems I understand that, with your new work on tango, you reshuffle the cards as far as techniques and technologies you use are concerned. Could you tell me about it?

Tatiana: I did it because someone told me I was becoming boring and as I had other things in mind I thought it was the right moment. In fact, it was funny to do something new, including the change of roles we decided to have, such as for Mimmo, usually a sound producer, become an image producer.