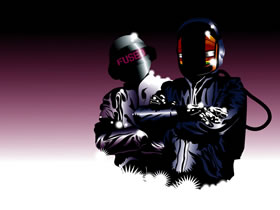 Some years ago, during a rock night, I played a sequence of tracks made up of Franz Ferdinand, The Rapture ed Electric Six . After a song of Electric Six (“Danger! High Voltage”), an about twenty year-old guy, approached me and asked me to play rock. Not to play “more rock”, but to play rock.

After a first reaction of astonishment, followed the almost sociologic purpose to understand why a twenty year-old boy did not consider rock what I was playing. The tone of the sound didn’t allow any doubt: instruments played, true basses, new wave/punk guitars and singers. A sound equipment undoubtedly rock. I thought that maybe the funk of the tracks wasn’t attractive to a certain type of rock public, but then ,thinking about Red Hot Chili Peppers and Rage Against The Machine, I had to change my mind. Then lighting, which, as any lighting, is under the eyes of everybody. What didn’t reach the ear of that guy wasn’t the punk funk factor but the dance rhythm equipment, bpms above 115, or, better, 125 or 135. The dance tendency of those rock songs made them less attractive to a more conservative rock public and meanwhile more attractive to a more progressive dance public.

Sometimes it is difficult to accept that, even in an art such as music, exists so many barriers between listeners, and that music is divided into sealed off places, but it is really like this. It is already difficult to appreciate all kinds of music for the most opened music lover, then think about a popular public in its widest meaning. There’s no accounting for taste in music. And even if every day we try to persuade ourselves that only two kinds of music exist ( good and bad music), meanwhile every day each one of us chooses what to listen to according to quite subjective principles.

Rock, which uses the syntax of dance, or, using the origin of the term, those of disco music and funk, is perceived as alien such as electronic (dance or not), which feeds on rock aesthetics and is considered intellectually higher. This is why dreadful and disgraceful terms such as IDM (Intelligent Dance Music) were born in music magazines. Intelligent dance music should be an electronic music with attitudes (more or less pre or post) rock satisfying the desire of culture of a rock public wanting to approach dance sounds without dirtying his hands.

But it would be enough to go back to rock roots to understand that dancing has always been a prerogative of the genre: rock’n roll was the exasperation of rhythm and blues which was, in its turn, the pagan version of gospel, whose singing associated to dancing was a religious rite. All kinds of music in which dancing was important, and all kinds of music born from a single dna black music, tribal music, started in Africa and were deported to cotton fields of America. If only history hadn’t a short memory… Masters are there to remind us about that. As George Clinton for exemple.

Clinton has taught us that Parliament would have never existed without Funkadelic and vice versa. Two faces of the same medal: music. Daft Punk with “Robbot Rock” hypothesize a quiet cohabitation between robotic and rock sounds introducing a sampled riff of a funk group ( Release The Beast by Breakwater ) similar to the most vulgar rock riff of the 80’s (“Eye Of The Tiger” by Survivor) which becomes in its turn a modern house track, a forerunner of the dance top-ten made on rock riffs (“I Like The Way You Move” “Body Rockers”).

Daft Punk called the masters of dance in (in Teachers ) . They, that had a rock past (as Darlin’), and that in fact were labelled “daft punk” by a review on the late Melody Maker, should rather be called “Daft Funk”. It is not just a case that, in a game of cross references, the cover of “Teachers” is the opening track of Nite Versions by Soulwax . A long list of masters of rock, instead of masters of dance, from a group who has fed on the syntax of dance music to produce a rock album ( Any Minute Now ) and on rock energy to make of it a dance remake (“Nite Versions”). A band becoming a Dj duo, such as 2 Many Djs, that during his dj sets manages to convince us that rock and dance are one single thing.

Some present example? The Bravery, The Editors, Bloc Party, Kaiser Chiefs, Franz Ferdinand : all rock bands feeding on dance syntax in their tracks. Not to mention more explicit examples such as !!! and the cousins Out Hud ? New Yorkers such as DFA (Lcd Soudsystem, The Rapture, Juan MacLean) push the accelerator of electronic music always keeping a definitely rock attitude. The German label Gomma acts in an opposite way: from funk they develop the aesthetics of dance with a rock attitude.

Anyway, extremes meet and the two labels started to collaborate. For instance, Who Made Who , (label Gomma) a band, whose drummer is dj Tomas Barfod , makes of Benni Benassi’s dance track (“Satisfaction”) what it should have been: a rock track with a riff of a funk metal guitar. Even a label such as Trevor Jackson ‘s Output doesn’t disdain to represent the dangerous relationship between rock and disco with artists such as Colder o DK7 .

Tiga , a DJ with electronic origins, feeds on house sounds but his new-wave root is evident. In his album Sexor , he collaborates with artists such as Soulwax and Scissor Sisters and sings covers by Nine Inch Nails and Talking Heads. Talking Heads and The Clash, or, if you want a more underground level, Liquid Liquid and The Contortions had already said all that had to be said on contaminations between disco and rock. If you think it over, bands much less nobles such as The Kiss, already had their “I Was Made For Loving You”, among the astonishment of hard rock fans who considered it sacrilege this approach to disco music. How did you say in that time? Ah, now I remember  “Disco Sucks!”.