Jesper Just, True Love Is Yet To Come 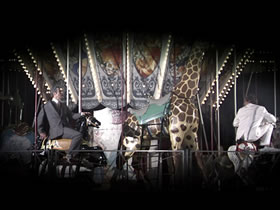 Performa was born as a cultural association in Spring 2004 with the goal to organize a Biennal Exhibition dedicated to performance and visual arts. New York surely has a strong tradition about performance, that took roots in 70’s movements, when SoHo in particular was the cradle of new way of artistic expression.

Its first edition, Performa 05 , has seen the light from 3rd November to 21st November and has invaded the Big Apple with more than 90 artists, who exhibited in many different places found between Manhattan and Brooklyn. From Marina Abramovic, who proposed historical performances and an absolute premiere in the amphitheatre of the Guggenheim Museum , to Francis Alÿs , who organized a fascinating striptease for a selected audience, just to mention a few Sisley Xhafa and Yoko Ono , going on with new talents such as Tami Ben-Tor or the Collective My Barbarian. An event that looked at the tradition of the start, as well as the possibilities offered by the new media and mixture now active.

In these terms, an exemplary performance is True love is yet to come by the young Danish artist Jesper Just (1974). The film preview has been shown during the opening of the Biennal Exhibition of Performa, as the work was commissioned by Performa indeed.

Kaleidoscopic and visionary, presented in the relatively restricted space of the Stephan Weiss Studio , his work is a sort of trip into love passion. Into an elaborate mixture of played scene, video-screened landscape and holographic figures with whom the protagonist try to interact, the real third dimensionality of the scenic space has been exploited in synergy with the pretended reality of the screening. Jesper Just used two teams of production to realize the performance. One specialized in video, including Danish KM-Animation and the American V3 specialized in interactive multimedia, and the other one specialized in scenic production.

In general Jesper Just uses the video, always realized with highly professional production, as medium of election. He always face the themes of masculine omo-eroticism and the seduction in a contest rich of references of Hollywood , between irony and dramatic taste.

As often happen in his works, in True love is yet to come the cast is composed only by man, in a sort of game of unattainable longing. From the character of flesh and blood, Baard Owe, to the object’s hologram of his desire, going on with the group of Finnish Huutajat (literally a chorus of “shouter”). The sentimental trip of the protagonist develop into a multimedia scene made intense by strong initiation features mixed with childhood suggestions. Immerse into the darkness of the night, the performance bring us from a wood to an unreal and inconclusive run of a carousel, and then an aquatic background (so death and rebirth at the sam.