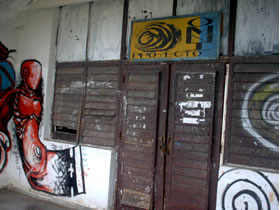 How does the “new media” concept work where even technology is difficult to find? Is it possible to talk about hacktivism in geographical, political and social spaces where the lack in technology prevent from developing practices and activities that involve exclusively the Internet? The question  and its possible answers – has been suggested by the collective of artists and activists Chilean Troyano, who asked me to take part in a conference at the 7 th Biennial Video and New Media Exhibition carried out in Santiago del Cile last November about artistic practices that involve new media in Cuba .

A point of view of hacktivism as collective practice, critical and not oriented to the production of artistic “goods”, gave me the chance to present into the series of talks  focused on the theme of Hacker as virus that pierce and crack a system  the work of a group of artists and activists from Havana with whom I worked for two months last summer. Our project was about collective artistic practices in public spaces in Cuba from the 90’s up to now.

The publication and presentation of the CD and book Alamar Express by Proyecto Omni Zonafranca links with general Biennial thematic  and so New Media. It took place in Havana last October and it’s the collective realization of a multimedia project. Sound and text gather the visual and obviously sonorous seven years history of the civic action group. It moves into the Cuban culture as a virus, changing the critical thought in action of the artist, inside a social community.

Omni was born, developed and works in Alamar, outlying suburb lacking in infrastructure of East Havana . This zone is inhabited by more than 300 thousand people and it’s badly served by media, deprived of public spaces of socialisation and services. Well, far more different than the picturesque pictures of Havana sold to rich and corpulent North American or European tourists. Space of the counterculture starting from the 70’s (now it is the cradle of a Rap Festival who’s born in 1995), Alamar it’s a district inhabited by Chilean refugee because of the dictatorship, Russian, inconvenient intellectual for the Cuban system. But it’s also part of the short and not intense- history of post-revolutionary Cuban urbanism, rationalist north European and Soviet project that proposed huge living structures spread in an area near the sea and essentially agricultural (a sort of little Living Unit as which of Le Corbusier but in the middle of nothing).

Alamar Express is the collection, sonorization and representation of the Omni activity who works as a project of social research and direct intervention in its district. During the years the project brought structural changes, built social spaces and realized events that prove that arts can still ameliorate the human life. Omni started using words and bodies, economical instruments that are hardly controlled by censorial practice. It ameliorate the district life getting round the bureaucracy, building up benches for bus stops, where you can wait for hours, restoring an abandoned amphitheatre that is now a popular social space of the entire East Havana.

Made up of more than 35 tracks, the CD “Alamar Express” gather urban poetry, district noises, rap, analogical remixed sounds (for example the keyboard of David Escalona, member of the group Omni, is his rhythmical base for his poetical readings). From the angle of the quality it’s an incredible project, most of all if you think that people who created the product have at their disposal nothing more than a PC and a digital camera. “Alamar Express” is the story of a trip in the district. You can see the images in the two videos (integrally filmed, edited and post produced by the group) realized as tracks sound/visual/poetic of the CD, as well as in the video-installations that the collective realize in the spaces of the district. Illegal night screening of images taken in the urban space.

The use of digital media and their forcing are definitely hacker practices that bring communication and interactivity. The creative use of digital media available from the black market in a country where the Internet connection costs from 6 to 10 dollars per hour, as the minimum salary of an employee. And the creation of movies using a digital camera, where you can save up to 30 seconds of .mpg and nothing else. These are the reason why I want to think to the activity of the collective as an action of hacktivism critical, conscious and highly ethic.

Maybe the old theoretic question about the use of technologies in art in an act aimed to it is solved in Alamar. When it’s naked from every superstructure, technology becomes one of the greatest ways to realize social action. .