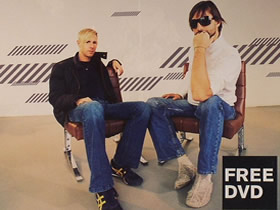 And if you want to die for envy, you have to know that Slices is for free. You can’t miss that small logo on each cover of each new issue: “Electronic Beats”. Starting from this logo you come to know, without any particular effort, that the project is supported by no less than T-Mobile, the Teutonic equivalent of our beloved Telecom, pushing and supporting this way the so called electronic music life and style in Germany . So the young German can benefit from a vanguard product without spending a single euro. It’s still a long way to go for our poor Italy . But if you’re lucky you can find Slices in Italy (or for free shopping on some internet web-sites) and the dubbing/subtitles in English help. Slices is an innovative experiment gathering interviews, specials, video clips, tutorials and each kind of interaction a DVD format can offer: a true multimedia magazine, an alternative to the music television more and more lacking in the natural contents.

What strikes you most is the clear purpose to promote electronic/dance music as a culture and as art movement and meanwhile as entertainment/industry. It’s this double aspect that makes Slices something unique. In order to understand the purpose of it you have to read, in the first issue, the report, with a documentary and journalistic style, on Kompakt, a label and a dispenser of a minimal sound which gained the dance floors worldwide.

So far three issues were released. They devoted largely to interviews with artists like Richie Hawtin, Ricardo Villalobos, Miss Kittin, Alter Ego, Ewan Pearson, A Guy Called Gerald, Slam, Matthew Dear, Anthony Rother and many others. There are even specials on the most avant-garde labels from emerging artists like Get Physical and Klein to WELL-KNOWN artists of electronic production as Warp and Novamute .

Even more interesting is the section Slices devotes to new technologies and to softwares aimed to producers and deejays. It’s impossible not to mention the special on design and flyers story. The visual aspects of electronic culture are then guaranteed by first choice video clips you can hardly watch on TV.

In the first issues there are video clips by Fenin, S. I. Futures, Captain Comatose, Rother, Minus, I-Wolf, Rex the Dog, Alter Ego, Nightmare on Wax, Funkst ö rung . Talking about video clips it’s quite obvious to involve the new frontiers of Vjing and I must say that even in this Slices is on the front line. The third issue has just been released and the fourth is expected on December. For free or not, I am looking forward to it and I’m sure the most careful readers of Digicult will follow my suggestion. An interesting extract on the future digital publishing between clubbing and art.