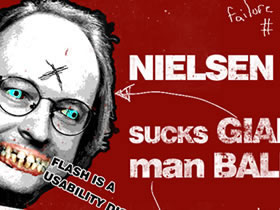 Some studies give their mind to their technical capacities, to likely future imaginaries, to complex navigations and elements in 3d in order to celebrate the net and the new way in which they think it should be. Wefail is a study of graphic design which simplifies everything and turns it into practically art.

Their approach is made of elastic puppets and characters full of details and particulars not only in a graphic level but also within the animation. They are assembled in uncommon horizontal navigations as inside a long two-dimensional aisle. This approach is combined with a great sense of humour and so it makes their creation more human and kinematical than many other works of graphic design in the net and not only; maybe it hasn’t a great level of interaction with the user but it is always attractive and pleasant.

In the Wefail project the use of the web is clear and declared; it is not only a platform to diffuse the one’s own work, but also a real area of exploration of the project and graphic potentials of Flash and Internet. It is an imaginary which winks at the punk culture of the eighties, a series of aesthetical ideas (journal fragments, photos and yearly images) and of techniques (visual scretch and sound constructions), which make Wefali one of the graphic design agencies more popular and valued.

Their web sites tell us stories which amuse everybody. They don’t follow web-trends, but only the personal pleasure to have fun and amuse. Maybe is this one of the secrets of Wefail? We ask directly to Martin Hughes, the founder of the project together with Jordan Stone.

Luca Merzello: Where was born the Wefail project? How many people are involved, which are the interests and what is your philosophy, if you have one?

Martin Hughes: Wefail is made of two people: Martin Hughes from Manchester and Jordan Stone from Austin . We met on a Flash forum and we began to work together since then. We worked with the net and we met once a year. Our philosophy could be: amuse and not undersell. But if you are very good you can undersell yourself

Luca Merzello: Have you got internal project managers? If it’s yes, do you really need them? If it’s no, do you ever want them?

Martin Hughes: No, we haven’t any project manager, we let the customers find us. In the past we got in touch with many musicians and agencies, but they ignore us almost always. Now we let the brand manager contact us after having visited our works.

Luca Merzello: Offering different artistic input in every work, can help to reach celebrity and success? In short, does the research reward?

Martin Hughes: We keep on working on new ideas, or else I think we would get bored. We try to create always something new for every web site we make. It is not important if the customer is big or little, the work is judged as your last effort, or rather the better of your capacities regardless of how many they pay.

Luca Merzello: How did it happen the contact with BBDO? Were they far sighted to seek you? Or

Martin Hughes: BBDO found us like the others: online with our works. I cannot say that they were so cool to contact us

Luca Merzello: Which was your favourite or the more exciting (commercial or artistic) work? And which is your dream-project, which you can kill for?

Martin Hughes: We love all our sites as they are our children, it is always sad to exclude one. We want to hold them even only for us. I say that the Eminem‘s site is my favourite one now, but this will change when we will finish the new Dixie Chicks one. Maybe as a dream-project there is Morrisey, or Dr Drèor Radioheadeven if Jordan says that Radiohead are disgusting after having published “KidA“. I disagree, I think he feels gorgeous to distance himself from the Radiohead and he thinks that Robert Plant must have been in the Radiohead!!! I think it would be horrible

Luca Merzello: I find your style cool and ironical, in general. Does a “wefail way” (a way to develop the ideas) exist?

Martin Hughes: We both search new ways and approaches to a new work. We work together very well; I cannot work in the same way with another person. We read in our minds without discussions and without wasting one entire week to discuss only because our ego makes us behave like two shits.

Luca Merzello: Do you attend or are you invited to the international festivals?

Martin Hughes: We made it for one or two year but then we got stressed. We created this great exhibition films in order to focus the attention on us. But we waste too much time and it became nearly a work. We are thinking to use the time which we gain to go out instead of working on a show.

Luca Merzello: Do you think that your work has influenced other studies? Do you know your neighbours hires and De-constructive?

Martin Hughes: Beh, like everything in the web, I think we first were influenced and at the same time we have influenced someone. Even if nobody would have been influenced by the Wefail, we induce them to take a blind bit notice of us.

Luca Merzello: Are you interested in other creative realities in the net? Who and why?

Martin Hughes: Currently I am not interested in monitoring other creative realities in Internet. In the beginning we follow almost everything in the Flash world, but today I think to follow more the world of the animation and of the telly. We have maybe more things in common. Like the frames of film camera and more interesting animations, rather than yet another web site made by Flash. I believe that we will make more works for the telly; therefore Cartoon Network was a great job, a dream come true.