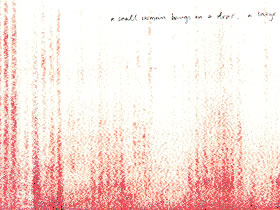 A new and interesting phenomenon occurred at the Congresses Palace in Rome during the 49 th town-planning and architecture world congress IFHP (International Federation for Housing and Planning)  city futures: continuity and discontinuity, a reflection approach that prefers to read the city through senses.

As a matter of fact from 2nd to 5th October at the huge and marmoreal spaces of the Congresses Palace at Eur (a Roman quarter of imposing architectures) multimedia and interactive installations found their place as an integrant part of the Congresses Palace body. Worldwide architecture and town-planning exponents met in Rome for these four days of meetings and workshops and Rome is the ideal city for this kind of convention. The new element offers itself to the audience senses when they enter the big congress assembly-room and they are surrounded by sounds, images and music. The Roman association Moorroom attended to congress audio-video installations and performances proposing a 6 senses perception to the contemporary city where the 6 th sense is “communication”. A substantially aesthetic-perceptive point of view that involves human senses penetrating into every aspect of the city: the globalized and globalising city, Rome as Berlin , Florence , Paris , London , New York and so on. Cities with similitude and peculiarities alike and different populated by a spirit that runs away from homologation but where the peculiar traits of the technologic revolution mark out unusual courses.

During one of his interventions the American Architect William J. Mitchell underlines that “Evolving throughout the centuries cities have been getting closer and closer to organization and to the behaviour of intelligent organisms. () today cities are equipped with electric nervous systems and it’s crucial to start understanding them in terms of their sensorial capacities, information fluxes and processes and capacity of intelligent answers.”

National and international artists asked to express their sensorial approach to the city find ways that excite our curiosity and at the same time make us reflect. Connections among different disciplines end by tracing out a map of manifest relations: The architecture re-draws the sound, creates listening points, lives the changing urban landscapes. Cities are pulsing worlds of frenetic rhythms, uncontrolled expansion. Cities are multicultural and cultures homogenize themselves in observance to market directives but at the same time they refuse the savage standardization.

This sensorial experience passes through different stages. There’s The city and the sound an interactive installation (a special surround system) realized by the British artist Justin Bennett drummer of Gran Mal and BMBcon bands. His musical research goes from simply sound recording of the urban tissue to the material expression that combines plastic and visual elements. The sound keeps the memory of passed time and space-temporal traces, a 24 hours recording of a sound on a Roman roof. The conceived creature is called Sundial and it’s the collection of 24 sound fragments compressed in eight minutes every sound variation.

The sound element integrates with a special mobile structure that consists of pneumatic elements blown up by a fan realized by the artist-architect Marco Canevacci (Plastique Fantastique) . Structures can assume different forms like for example tubes and bubbles. These spaces occupied in an atypical way for a few time recall the Russolo’s idea of “Going through a city with ears more opened than eyes.”

The city and the sight presented from the research group Ogi:no Knauss with the interactive installation Triplicity is a series of video clips produced during the last five years that presents a urban landscape, expression of the contemporary economic globalization. The creative process and the image management of this Florentine research group born in 1995 as a laboratory of mutant cinema correspond to music composition processes. The metropolitan tissue permeates Ogi:no Knauss fast and sharp montages, faster and faster sequences that immediately disappear: road signs, sign-boards, placards, architectonic details and complexes start to live permeated of their value. This way Ogi:no Knauss realizes an attentive elaboration of urban movements, it draws maps, marks out new layouts to go through faraway spaces and times.

The audience-editor is directly involved in the selection of audiovisual passages that will mark out a journey in the cities, as if the audience were in the cutting room. The installation has 3 screens and 3 different control positions. Each selected video is automatically set by the computer in a consequential order. Clicking on the play key an each time different trip will start  a continuous exploration.

The city of taste and smelling presents a video-sound performance that was born from the collaboration between Slowmotion (music) and Circolo di confusione (video) . Slow Motion is a continually changing entity, a sort of open group that is always ready to welcome new influences to project its creative instinct into unexplored territories. Their music is a mix between digital electronic music and analogical modernism with some unplug influences and a melody tendency. Circolo di Confusione is a project born in 2001 from the collaboration between Virginia Eleuteri Serpieri and Federico Maistrello . Virginia Eleuteri Serpieri has been participating to numerous cinematographic festivals as a video clips and shortcuts author since 1999 and she regularly collaborates with Slow Motion for concerts and installations.

This audio-video performance is 50’s science-fiction movies-inspired. The odd scenario where food is seen as a means of creating relationships and communications intends to project the spectators in an oneiric atmosphere where it’s possible to live the dream with naivety and optimism, where they can let themselves go into the aesthetic game.

The city and the touch section presents digitation as an irreplaceable element of the contemporary world and offers the audience the possibility to express thoughts through statements and images inspired to the relationship between the city and the 5 senses. This images and thoughts sequence is musically presented to the audience as a new work of art and it is projected during the congress.

City futures: continuity and discontinuity exhibition give us the possibility to create real mental maps where the city is not only its topography, architecture and project but life, a passage way of communities and urban life. Virtual places give us the possibility of more passages; they offer new expressive forms now that divisions among the disciplines are day by day disappearing new models of cities believe in a plural disciplinary approach thanks to communication digital technologies also.

Senses pass us through everyday in a manifest way and all these daily inputs tries to seize our attention to communicate with us while we carelessly ignore them. Contemporary artists understand the hidden messages, they decode them and then they offer them to the audience as in a modern pagan ritual. To actively participate is probably the only way.