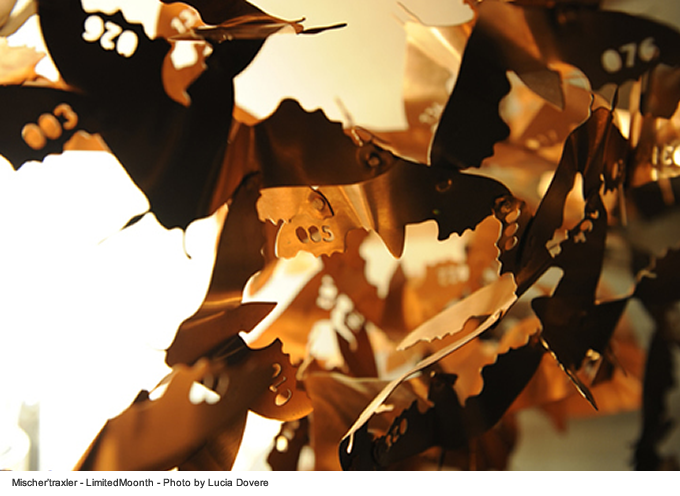 Katharina Mischer and Thomas Traxler (Mischer’Traxler) design and develop collections of objects and conduct experimental research into design , by adopting a conceptual approach. These two designers love experimenting, analyzing and creating in a fully autonomous way, by devising concepts, systems and views, rather than single and simple products. Their works, by becoming part of a sustainable perspective of needs, ask us to pay greater attention to ethics.

After graduating at Design Academy of Eindhoven in June 2008 and cooperating for several years, in 2009 they finally settled in Vienna (their working headquarters). Their works were exhibited at various international design festivals, besides many pre-eminent art museums as Design Museum of London, where in 2010 they exhibited “The Idea of a Tree” for Designs of the Year (they made the shortlist, while their “Limited Fungi” shelf became part of Droog collection).

These designers also exhibited at Art Institute of Chicago, at MAK of Vienna and at Designhuis of Eindhoven. During the “Salone del Mobile 2011” , they received the prestigious Designer of the Future Award from W Hotel and Design Miami/Basel). For this exhibition the Austrian duo developed a “self-built” textile machine, able to directly translate the luminous intensity of the sun through a mechanical device, whose production process works in an autonomous way, as in photosynthesis. This machine produces from dawn to dusk and its output is a distinctive and unique artwork able to function as daily record , where we can see the increase/decrease of the sun luminous intensity in that very location on Earth. “Like a tree, the object becomes a three-dimensional record of its creation process.” 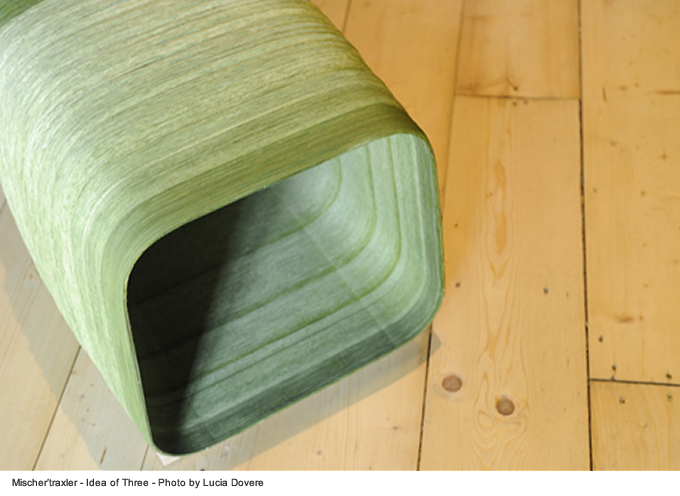 In Mischer’Traxler’s work we can notice their trademark: designing production processes that combine nature input with mechanics through a new way of looking at objects, which in turn mirror the place where they are produced . As I said before, ”Recorder One” machine starts producing when the sun arises and stops when the sun sets . After sunset, the finished object can be “harvested”: it slowly grows, by polling threads through a colouring device, a glue basin, and finally wind them around in mould.

The length/height of the resulting object depends on the hours of sun during the day. The thickness of its layer and the colour depend on the intensity of sun-energy. (more sun = thicker layer and paler colour; less sun = thinner layer and darker colour. Working in this way, every single cloud and/or shadow are the key to the look of the final object.) “The Idea of a Tree” is no criticism of industrial production, rather its aim consists in showing the creative possibilities of alternative energy sources, thus proving “how products can be influenced by environment and natural rhythms.”

I had the pleasure of seeing their extraordinary work during the Naturally Combined workshop, organized by Riot Studio of Neaples and Marco Petroni. During these four days participants had been working on how developing nature elements, by creating a kind of design applicable to everyday life in relation to the distinctive phases of the cycles of nature. In this way, they had the possibility to face together the environment and nature of a Mediterranean city. 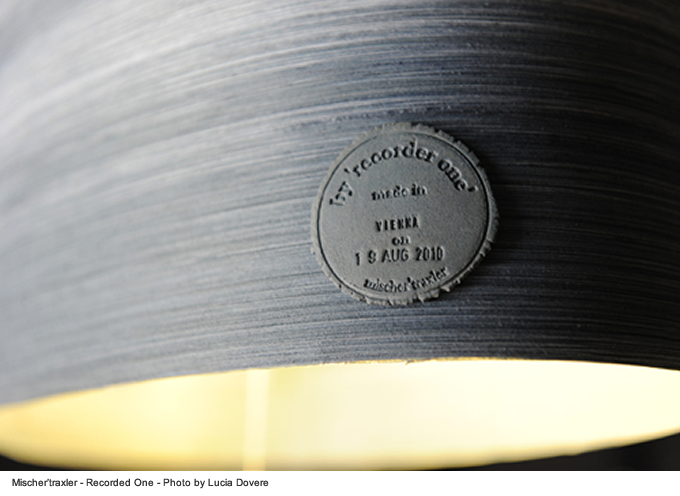 Here is the manifesto drawn up by Mischer’Traxler, which they followed in their workshop activity: “We’re two complementary human beings who influence one another during the working process. We develop and design together products, pieces of furniture, exhibitions and much more, by often focusing on experimental and conceptual design. We examine, experiment, analyse and refuse.

Working in this direction, we’re trying to observe what surrounds us and people’s habits, in order to draw our conclusions and ask new questions. Why? and, What’s the purpose? are our main questions before starting a new project. All this often translates into general concepts, views, views’ systems, rather than into single and simple products. On the contrary, the question: And if…? leads to new interpretations and allows us to develop whole production processes and different approaches depending on various possibilities”[1].

But the really incredible aspect of their work lies – according to me – in their methodology. All the processes developed by these two designers are completely unconventional, in their approach. In fact, their processes express some forma mentis, according to which design needs to focus more on the systems than on the products: “We’ve focused our attention on production process – they tell us – by creating a production experience that looks on nature as a self-sufficient dimension. It’s obvious that thinking and designing in harness with nature, we’ve consequently declared our ethical and sustainable intentions of design”[2].

Their work is also characterized by meticulous observation of the processes of nature , thus channeling it into their design dynamics and keeping an “environmentalist” eye on sustainability. “We consider our work – they add – as a result of new combinations of two or more components (e.g. new findings, interesting materials, or innovative techniques, ideas and thoughts). Reference to nature is based on intuition, instinct and inspiration coming from wildlife observation.

All these elements merge all-in-one to give – in our opinion – an extremely charming sense. Katharina is charmed by nature systems, symbioses and environmental cycles, while Thomas watches and learns from nature naivety and from its structures and solutions. We debate together various subjects and try to develop them as projects. Most of our work comes to life from the observation of nature”[3]. 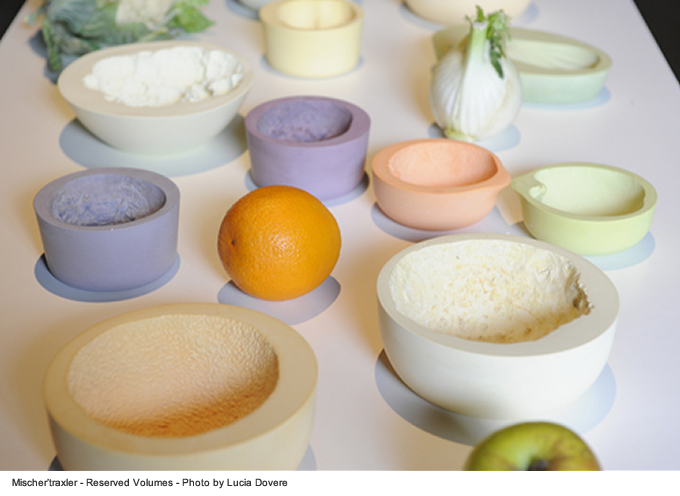 Many of Mischer’Traxler’s products are unique pieces with some aesthetic appeal of industrial products, thanks to a series of micro-variations deriving from the distinctive feature of environment and to the uniqueness of the particular moment. All of this raises significant questions on mass production. “Art and design are brother and sister – Katharina Mischer and Thomas Traxler tell me – although they’re different and correlated. Maybe art does have a more emotional nature and design, on the contrary, a rational and practical one”[4].

In the “Reversed Volumes”project for example (bowls realized by capturing the imprint of fruits or vegetables), the space between containers and fruits/vegetables is filled with ceramic, so that bowls can preserve their imprint. This process makes every single bowl unique of its kind, like the fruits/vegetables used. This is the reason why every bowl is a unique piece although it comes from a mechanical reproduction process.

In “Real Limited” we notice an analogous situation, explained to us by the artists themselves: “ Real Limited, in its production of a particular type of products, which mirror the restraints imposed by human beings and pure nature, draws its inspiration from the “limited edition” idea, from customs, as languages and dialects, from handcraft,… The main idea consists in starting to revitalize them or, where it isn’t directly possible, to interpret their use. “Real Limited” has to be the proof that design can be functional, good and beautiful, not only for the look of its final objects, but also for the idea conveyed by the latter”[5].

For example, in their first “Real Limited” project, some endangered species were translated into “limited edition” products. Each product, or product element, represents a living being. “A share of the revenues from limited editions sales is donated to the environmental projects that are trying to protect selected species – Katharina and Thomas explain to me – and the idea is that of reproducing new limited editions over the years, by mirroring then the development of species. If the number of people grows, the number of editions grows too. Until now, the result of this process is “Limited Fungi” shelf and “Limited Months” lamp” [6]. 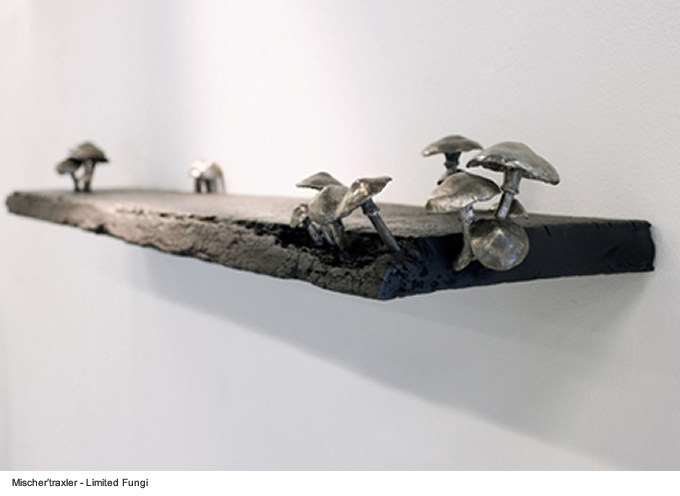 The latter represents a rare species of an Austrian moth made of copper. Every single object of this series is numbered and refers to a type of existing moth. Thus, each lamp is a unique piece and its number directly comes from nature itself. “Our intent consists – the two designers conclude – in trying to protect this endangered species: in some years it will be possible to produce another lamp by shifting from limited to unlimited”.