Lights And Sounds At Sonarama 2008 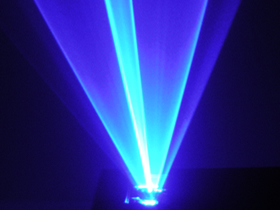 The history of sound-light relationship is almost three centuries old, a complex and labyrinthine path, full of key characters and moments for the history of audiovisual art as we now know it.

From the clavecin oculaire (1740) of the Jesuit, physicist and mathematician Louis-Bertrand Castel, to the colour organs (1895) of Wallace Rimington the colour keyboards (1910) of Aleksandr Skrjabin, the Clavilux (1920) of Thomas Wilfred, the optophonic piano (1920) of the Russian futurist painter Vladimir Baranoff Rossiné, up to the pop Joushua Light Shows in the 1970s and the avant-garde Futurist and Kinetic art movements (forgive the time gap, but movies and videos dominated for years the experimental audiovisual artistic world).

So, you can understand that it’s not simple in a festival, organize a special section about this theme. Especially when we should try to refuse a mere exhibition logic and add the historical element, that is important in this particular era (just as Amsterdam Sonic Acts tried to do at the beginning of the year). In other terms, unlike the exhibition part of the festival (Sonarmatica, read the valid critic by Claudia D’Alonzo), Sonarama simply avoided this kind of parallel and decided to present some projects about light use as a counterpart to the audiovisual.

Light&Sound is the title of the exhibition at Centre D’Art Santa Monica, curated by Oscar Abril Ascaso, Roc Jimenez de Cisneros, Anna Ramos and Advanced Music . This title obviously suggests that the curators want to underline light’s importance in the history of kinematic art: in theory it is right, but I think that maybe the results is not so effective because Sonarama and Sonarmatica weren’t “curated” in the same way (and with the same economic and space funds). For the first time Sonar exhibition sections were about a really important theme: kinematic experience, cinema beyond cinema.

However, usually Sonar sees Sonarmatica as the festival exhibition section, and this made Sonarmatica (except for Sonarcinema and Sonar a la carte), always focused on the audiovisual elements, unable to express all the potentialities of its concept. So, I hope a return to the distinction between spaces and ideas: in Sonar large and complex exhibition there’s room for ideas and projects, with a balance between spaces and availability, projects and artists.

Sonarama saw the presence of a special guest: the famous Edwin van Der Heide. And guess what? Yes, with his project Laser Sound Performance. To be honest, I’ve seen Edwin many times in the last years: I can still perfectly remember one of his first performances at Transmedial some years ago, in the small room of Maria am Ostbahnof. I must admit that, even if I admire his intelligence and sensitivity, proved by other projects focused on the physical “visualization” of sound, his LSP lost most of its usual synaesthetic features. In 2006 I invited him to perform in front of Kiefer’s Towers at Hangar Bicocca for the Mixed Media festival; maybe Edwin van Der Heide left off, paradoxically for Sonarama, the kinematic aspects of his project (focused on the lack of fog, an element that allows to create light buildings as a fascinating moment for the public), in order to focus on the analysis of the possible mathematical variants in the Gausse’s visualization of electronic sound (be careful: I said electronic and not digital, so it’s physical).

In one of the upper rooms of Centre D’Art Santa Monica, Sonar audience saw a project fundamental in the history of contemporary Audiovisual Art, that is a part of a larger artistic context, but I think (you know, critics often fall in love with efficacy and precision) it is showing signs of fatigue.

Moreover, Sonarama presented another artist who has always focused his artistic works on the audiovisual synaesthetic perception. Here again we find the perception dynamics, that don’t have always to be a part of sound-light relationship history, an important element but not as essential as Light&Sound theme. I’m talking of Mark Fell, a British sound and audiovisual artist, who presented at Sonar festival his project 8 Square Waves and Phase Locked Blue Light

In the central room of Centre D’Art Santa Monica, a circular structure made up of eight speakers and eight luminous LED elements was as an always present perception entity. It lighted up in some particular moments, following an audio-video score played live by Mark Fell himself. This live performance, focused on the analysis and recognition of psychological and perception effects of sounds and lights on man’s neuroretinal apparatus, seemed too banal, even if there were very interesting “physical” sounds, and too repetitive with no great or new ideas. The audience sat at the center of the circle and could understand the potentialities of an artistic project focused on sound-light-space relationship.

And I think that this architectural element, made even bigger by the use of light as a means of space analysis, is the most interesting element of Sound&Light exhibition. Maybe it wasn’t well represented in the exhibition but it represents Sonaramatica general concept: the kinematic experience, the capability to “get out” of the screen two-dimensional space, to go towards a more complex and architectural relationship with the space that surrounds the audience and the artist.

In my opinion, also Pablo Valbuena‘s project is on the wavelength: this Spanish designer and artist was at Sonar festival with his Augmented Sculpture Series. He was interviewed about this project by Bertram Niessen (the interview was published on Digimag 33  April 2008) and he now confirms his excellent works that I’ve already seen on the Internet, You Tube and his website. Pablo Valbuena’s augmented sculptures perfectly, but in a shy way, enter the architectural space; they are as they are because they can be “closed” in a corner of the room.

The procedure is simple but effective and elegant: light is projected on an architectural structure in dark room, taking into consideration the audience’s perception and the eye capability to see the colour differences in the light and shadow areas. Valbuena’s installation maybe follows a precise audiovisual scheme (but I’m not sure) and it shows the great potentialities of this discipline that is a combination of design, audio-video and architecture, just like other similar projects such as Halbzeug-Surface Refinement by Visomat (presented this year at Netmage and Club Transmediale) or the wonderful Carillon Chandelier by Claudio Sinatti.

Other two projects close Sonarama 2008 exhibition: Cube, a beautiful luminous LED structure that reacts to the music proceeding from the rich database of Minus label, by Richie Hawtin, and the live installation Farophonia Sintetica by the Spanish group Sonom.