I-realize: Analyze This For A Better Future 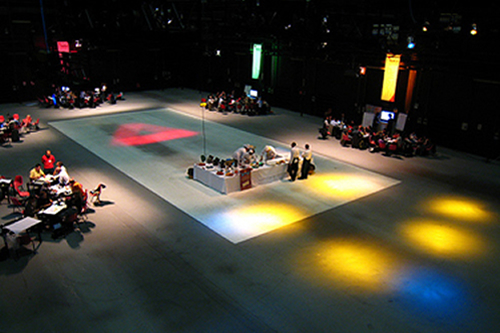 Two days to notice unsolved problems, introduce (technological?) solutions and stimulate the creation of new disruptive start-ups in different areas of work.” The event-conference I Realize – The Art of Disruption has been presented on its own website and was held on June 9-10 in the fantastic studios Virtuality Media Park in Turin. The stimulating the birth of start-up events in two days is definitely an ambitious goal. And by all appearances the goal was achieved.

In two days, everything I have been hearing and speaking about can be summed up in one word: “Disruption” or, at least in two words: “Disruption Wannabe”. I’ll explain this concept: disruption, or better disruptive innovation, according to economist Clayton M. Christensen, who first introduced this definition, consists in some technological innovations that allow the creation of a new economic model or strategy that has a strong, even revolutionary, impact on the market there. Examples of breaking innovations are the invention of paper, television, phone, Linux.
Therefore the term refers to a very outstanding innovation and I think it should be used cautiously, that’s why I would rather consider it as “wannabe” than take it verbatim.

Two days in Turin there have been a roundup on some of the disruptive innovations that are changing the way we live, communicate, or travel. And a general survey was done, aiming at analysing the state of art and of a potential future.

Several innovators, we just mention Moshe Bar (technologist and founder of several start-ups in the computing field, which have been a great success) and Peter Saville (a graphic artist of the most famous covers by Joy Division and New Order, founder of the independent label Factory Record), spoke of their work and how they have revolutionized the field. Together with the large start-ups there were a number of local start-ups: from Vieweb (www.vieweb.it), a company providing high-definition webcasting services, to SpyStory a reality game based on a web-community (www.spystory.it). I Realize looks at the world, trying to project at the same time a vision of Turin’s real life.

But how is it possible to produce disruptive innovation in the market and in society? They guarantee that the key is to find out unsatisfied needs, analyse existing reactions and start from those answers, find innovative solutions. This is the recipe I Realize is suggesting and it is the fundamental path after which the different topics defined by the editors were extracted: “I Eat” and “I Move & Interact”, “I Grow – Media”, “I Grow – Design “” I Grow – Wellness”.

The definition of the topics and the structure of 2 days based on them was worthwhile to define different sectors and categorise problems: the topics were food in relation to GMOs, fair-trade, eco-sustainability, transport and new technologies referred to the Internet of things, post-industrial design and fabbing, media and wellness. The description is wide and distinctly deep.

The starting points to begin to describe the different scenarios are always the same. The development of social platforms, which become important not only as a dating service or job-founding but as a collaborative tool to encourage problem solving: “The wisdom crowds is only as powerful as far as the crowd is wise,” says the IFTF (Institute for the Future) in the map “The future of making” created for Make. The increasing sensitivity towards environment and sustainability (eco-motivation) problems and the development of the Internet of things, the spread of culture DIY (i.e. the success of sites like Instructable, the Make magazine, the Dorkobot , and services as Ponoko); the spreading of the open-source and of the creative commons as a means of sharing culture as well as the customers’ expectations, who is always searching for customization and is used to receive many free content.

The first scenario that I want to describe is the one outlined by Nicholas Nova, researcher and editorial manager of Lift Conference (http://liftlab.com/nicolas_nova.php). He was charged to organise the workshop “I Move & Interact” and he reports here the conclusions of the workshop during the conference. The conference was also organised by Bruce Sterling (writer and futurologist) and Andrea Branzi (architect and designer, winner of the golden compass award). Nicholas Nova explains: “Our ability to communicate and interact both as consumers and as producers of information is increasingly ‘anywhere, anytime, anyway’ “, wireless networks, mobile devices can connect to the Internet and the new network of sensors is building “a new membrane of information around people, places and objects.”

The urban environment has changed radically: the network and the devices hurled the modern man in a milieu of unexplored or only partially explored potentials, that reserves attractive, maybe sustainable future contingencies. The information layer produced through ubiquitous technologies can be exploited to develop innovative applications and services to citizens. And the Internet of things, populated by Spime and Blogjects, that is objects that can communicate with each other and interact with users while preserving their own history over time and space.
The exploitation of this new information layer is more widespread and relatively old than we might think: for example, in Turin, as in many other cities, the local transport company offers a service that allows you to receive information on buses timetables real-time through a live media-tracking via GPS Such a service is generally widespread and that is possible through technological “talk” in the means of public transport.

The project practice, says N. Nova, should not mean to invent from nothing, but rather rethink about services already existing services and tools (such as the one mentioned above) in order to improve their performance. An example of simple and clever innovation that Nova reported is Trenitalia: instead of investing on the high speed the installation of wireless networks in trains would have been cheaper and more profitable, and it would have attracted more customers than the luxurious interior design of Frecciarossa has done.
Nicholas Nova concluded with a series of questions: the services and the technological solutions are “thrown” on consumers, but do they really meet the people’s needs? Should the designer revolutionize user practices, or rather follow those practices? Is it possible to make the information layer, or the substrate produced by Spime and users themselves, more visible?

A second particularly interesting scenario was presented during the workshop and the conference “The Grow – Design” during which they talked about post-industrial design.

The workshop was committed to Giorgio Olivero (TODO, Interaction & Media Design www.todo.to.it) and Menichelli Massimo (designer and researcher, www.openp2pdesign.org). While during the conference also Massimo Banzi (inventor of Arduino, www.tinker.it) and Jennifer Higgie (writer and co-editor of Frieze Magazine) attended the meeting-

Today more and more designers are anxious to build their own tools for the design: the designer–programmers who are inspired by the DIY and hacker culture to produce content that are then placed again in the network for the community. This new type of designer doesn’t produce items finished objects but dynamic designs, and they’re open to end users’ contributions, who have become prosumer (producer + consumer). That is, they aren’t passive users and they are responsible for defining the variables that the designer leaves open to manipulation.
This is possible thanks to the spread of digital technologies for fabrication or fabbing (such as 3D printers, laser cutting machines, numerically controlled milling machines ..) that are becoming increasingly cheap and allow a shift of design and production to generative design, participated design and mass customization.

A famous example is the NIKEiD site (http://nikeid.nike.com) where the user can customize the colours of the shoes he has chosen and buy proceed with the purchase. Giorgio Olivero states, however, that this kind of mass customization is somewhat fictitious The user shares the manufacturing process and design but this experience does not consist in a real surplus value, and it does not go beyond the “wow” effect given by the new technology. An example of intelligent mass customization, Olivero said, are the projects by Fluid Forms (www.fluidforms.eu): The project Earth-Pinstripe Bowl for example allows the user to choose a location from Google Map and then use the shape of the landscape (measurements of the heights and hollows of the valleys) to give shape to a wooden tray. This experience of customization has got an emotional meaning.

Will these practises lead to the emergency of new economic models? In the future will everyone of us design our chair by ourselves? And will we produce it at home thanks to a 3D desktop printer? What is the role of designers in this new scenario?

Stephen Williams of Fluid Forms (who was at the workshop) answers to the last question: the role of the designer is to define a “space of possible solutions”, which must be broad enough to leave room for customization, but limited enough to avoid the “prosumers overload with a range of options for customization which are most of the times unnecessary.”

However, Massimo Menichelli emphasizes the importance to adopt an open source policy: Tinker is a very good example of post-industrial design studio. Arduino is known to be an open source printed sheet (or a hardware): this means that Banzi does not collect royalties but that he can access, at the same time, to a huge quantity of “wisdom” generated by the international community lying around Arduino. The Arduino forum is a gold mine for anyone wishing to use the card for a project, much of the code has already been written and much of the hardware has been experienced. The material produced by the community is part of a wisdom which Banzi members could never have reached by themselves and that they can exploit for commercial projects with Tinker.

In the end, I Realize brought a wind of change in Turin: there’s loads of ideas and there are great opportunities to experience. Companies should try to be open to innovation, because there are really new possibilities offered by the market (and this was illustrated in the two days meeting). The scenarios outlined show a one and only truth: there is still much to discover and innovate. And a positive and decidedly precious idea is implied, especially in such an economically and politically dark period: the future is coming and there is the possibility that it will be better than now, you just have to want it.