Travel diary 1 meter under the metro 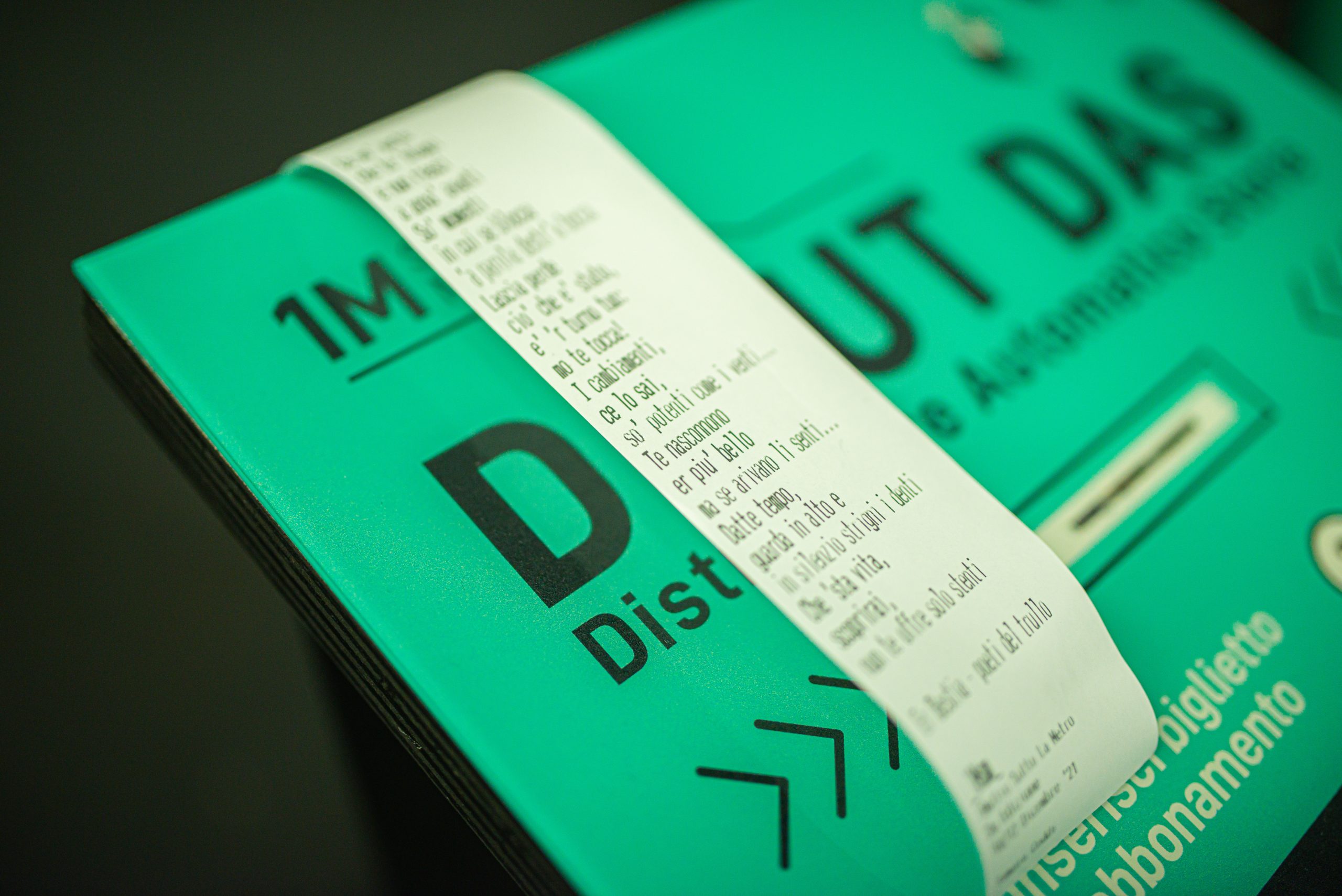 The second edition of the widespread exhibition of subway interactive art was held in Rome, from the 10th to the 12th of December 2021: 1 meter under the metro showed seven interactive art works in five stations of Metro C, or Subway C.

Curated by Arianna Forte and organized by Fusolab 2.0, the project was carried out in collaboration with Flyer, ATAC and SIAE, and was supported by Roma Culture through the Public Call Contemporaneamente Roma 2020-2021-2022, of the Department of Cultural Activities.

The subway, one of the most significant non-places of the contemporary, where the hybrid nature, organic and inorganic, of bodies, identities and technological devices travels on the same arrow of time. By hacking its rigid and predetermined routes, artists of 1 meter under the metro have literally broken up the functional and control characteristics of the technological languages present in the stations, transforming the ephemeral passage of travelers into relational languages, into imaginaries of innovation.

Thus, at the San Giovanni subway stop, the travel ticket is not useful just to start the itinerary. By inserting it in Do ut das – Stories vending machine, it gives back a print containing a selection taken from the poems of the Poeti der Trullo. The installation was curated by Tamara Ceddi, a collective born in Fusolab 2.0, that works around the reinterpretation of the public spaces through the research and experimentation between technological and analog tools, between computer and social networks.

Therefore, poetry is the background of the journey that makes its second stop in Pigneto, where the interactive site-specific installation by Piero Alfeo is exhibited. The Apulian composer and sound artist investigates how artistic languages can guide and balance the psychophysical conditions of individuals, in regards to the effects, direct and indirect, that anthropic activities produce in the conscience and in the environment. His work Chat with a stranger, located in the foyer at the entrance of the station, offers the opportunity for passengers walking on rush to pause and talk to each other. The installation consists of a collective chat that merges messages and returns them into an immersive and aggregating environment: an interactive dance of sounds and shapes generated in real time by the crossing of bodies and by the characteristics of the inserted words, with colors that pass from the atmosphere of the aurora borealis to the burning sun. 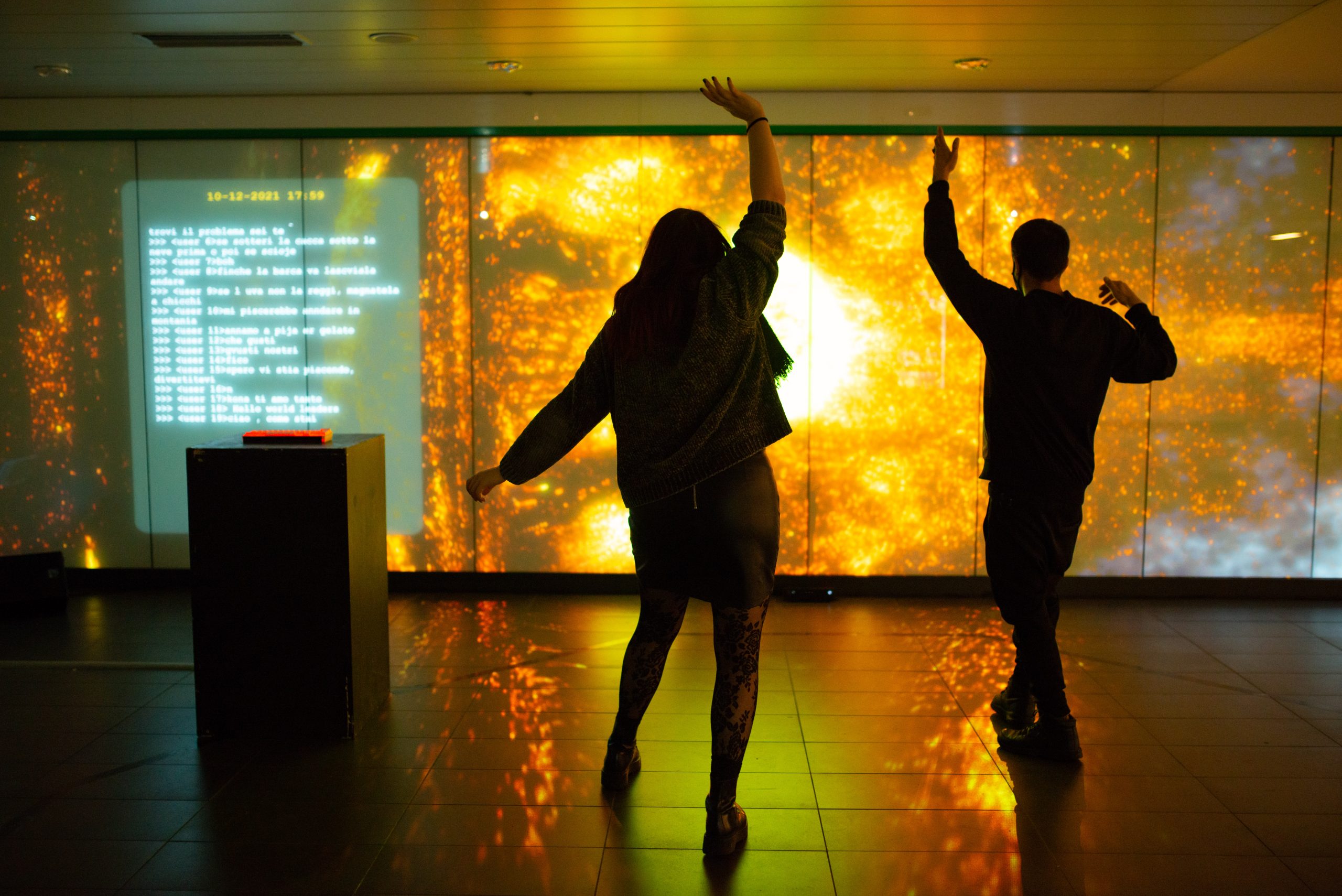 From this moment on, the typical experience of alienation during travelling on the subway is disappeared, and with this attitude of play and participation the show continues in Teano. Here, instead of the characteristic commercial shops, you can buy likes and followers on Instagram from fake accounts with Quick Fix, installation curated by Dries Depoorter, a Belgian artist who critically and provocatively reflects on issues such as online privacy, artificial intelligence, surveillance and social media. 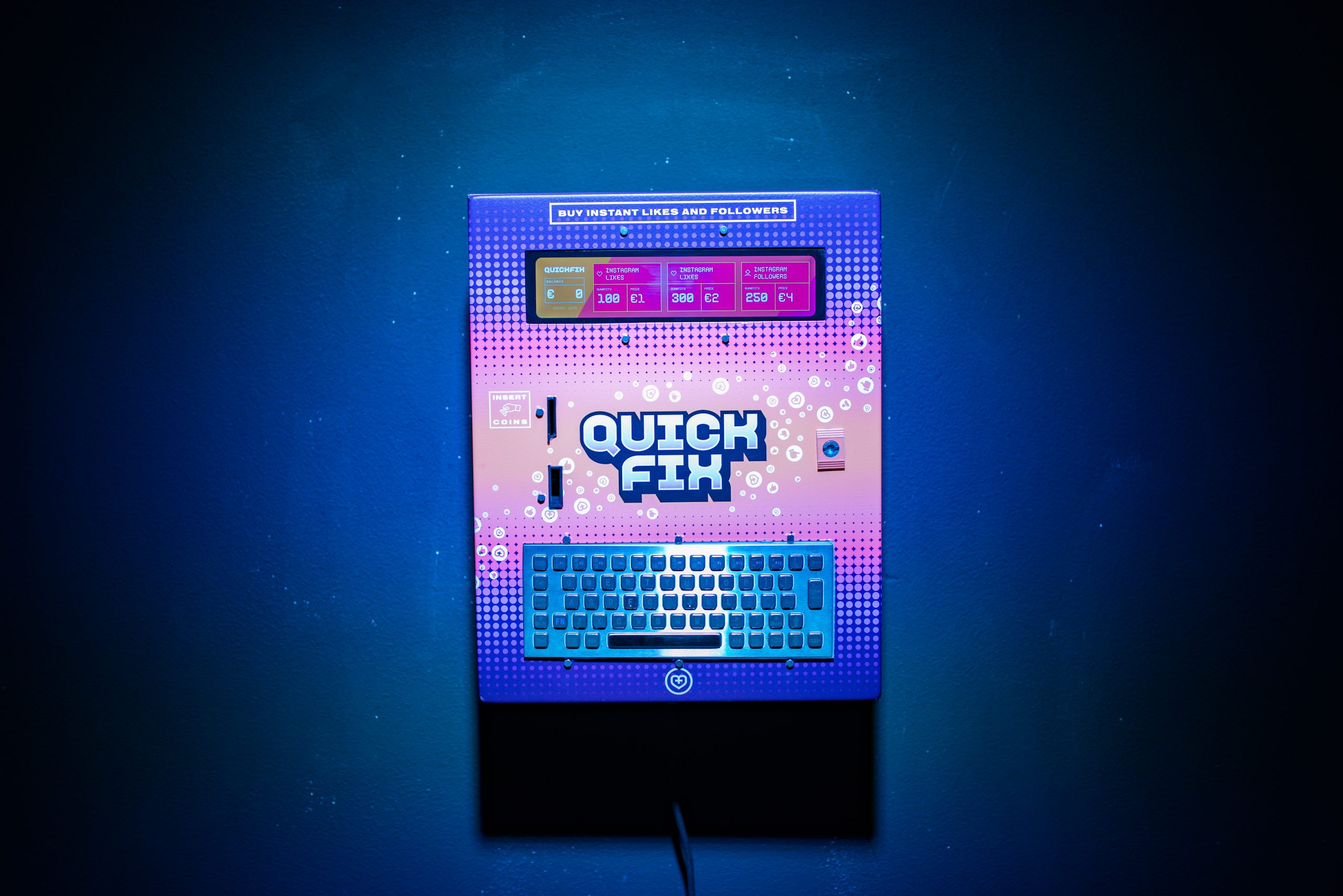 After increasing your fake popularity, it is possible to indulge in a bodily and sensory expansion experience, lying in the installation by Patrícia João Reis: an armchair equipped with motorized massage walls activated through the energy of the voice that invokes an OMMM. The sound from travelers’ mouths is captured by a sensor installed in a helmet that lowers the visitor’s sight and hearing, in order to make them reach a better relax.

With a body-mind stimulated in an intimate, interactive and playful way, you enter Sensible by Bram Snijders, Dutch media artist active in the Deframe collective. His art work is a shower of lights and sounds at the limit between the virtual dimension and the physical world, which allows you to fluctuate between physical and digital space, playing between the consistency of the first in opposition to the imperceptibility of the second, to inhabit them simultaneously and creatively. 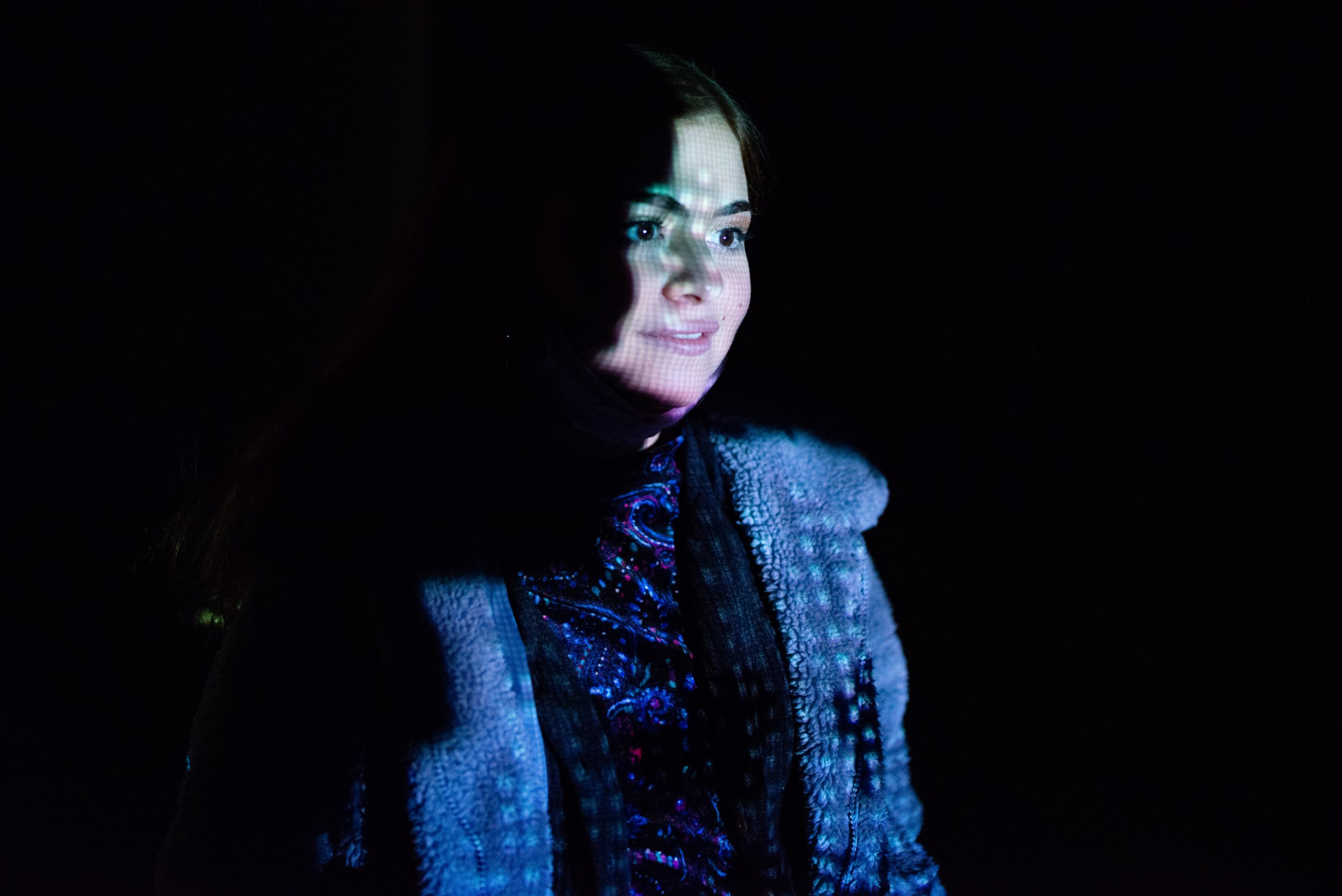 Following these experiences, in Mirti spect-authors are ready to take command of the subway, of the capital and of the whole world, thanks to the work of the very young Creative Technologist Shaune Oosthuizen, who operates at the intersection of art, technology and design to explore new forms of human-machine interaction. His installation, All Hail the Deepfake, is made by a complex system of mirrors, screens and cameras that, equipped with artificial intelligence, is able to transform the faces of those who are mirrored in some public prominent characters: you are Mario Draghi, Greta Thunberg or Mark Zuckerberg. You can make them pronounce your ideas and execute the actions you want! 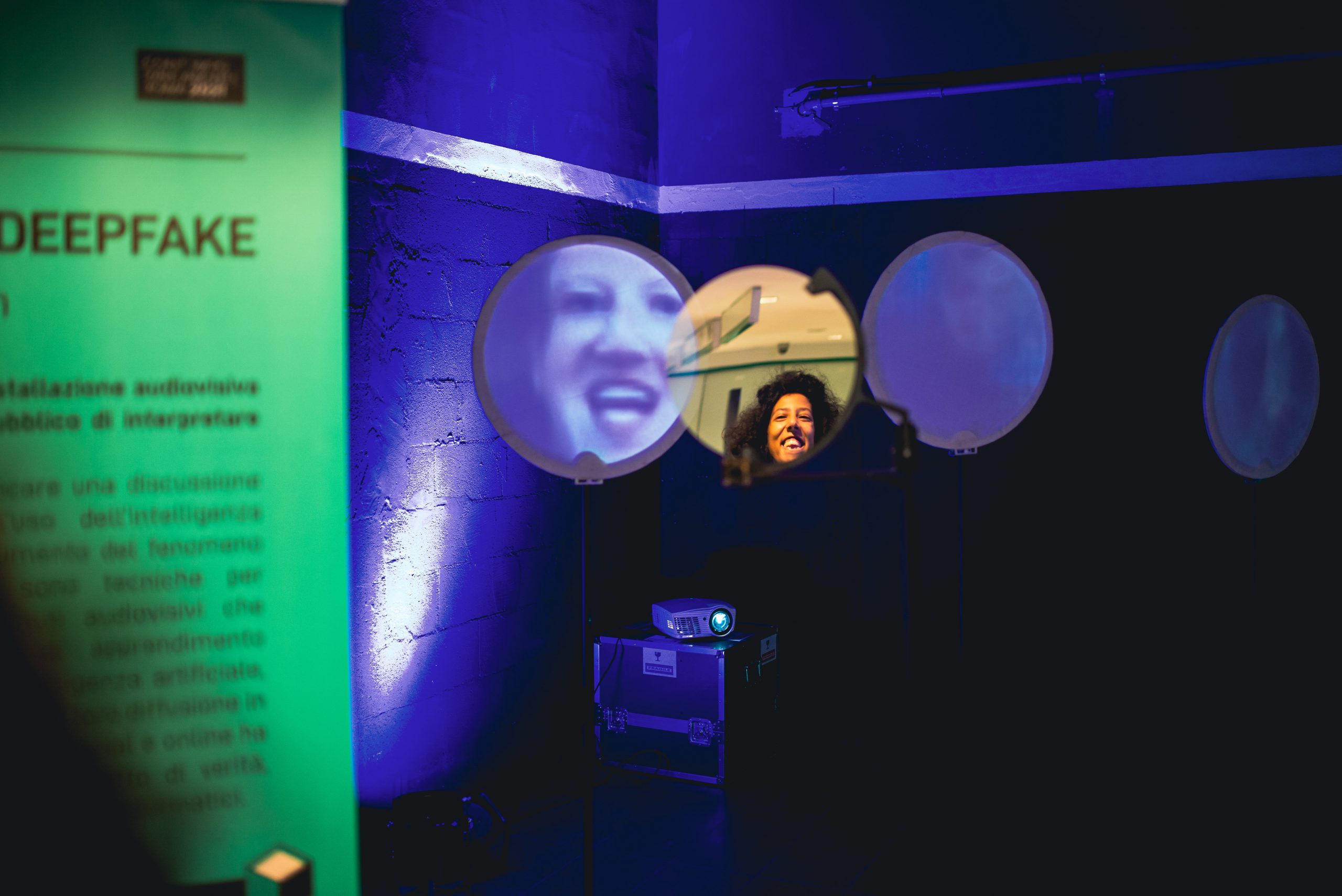 In the last stop, in Gardenie subway station, facial recognition systems are no longer needed to control the human beings traffic, but to generate piano melodies with emotions expressed in the faces of passengers, thanks to Mixed-Feelings, curated by Filipe Vilas-Boas, a conceptual Portuguese artist who critically and ironically examines our hypermodern times and more particularly the notion of technological progress.

Irony, play, sustainability and innovation are the keys that have opened up the routes of this navigation, but, in addition to the exhibition, two workshops held at Fusolab 2.0 spaces have given substance to the event with a strong message of inclusion dedicated to the  role of women and female artists in the society of scientific and technological innovation, with a further focus on gender issues, in order to overcome any fear and discrimination, also through the promotion of open source technologies and New Media Arts.

The first workshop Body Sonification was held by Patricia J. Reis, who led the participants to discover the electromagnetic properties of the body by “sonifying them” with some conductive materials and some Arduino Nano. The media artist from Portugal and active in Austria at Mz * Baltazar’s Lab, considers the construction of circuits as an artistic research where is possible to practice hacking as a cure, a sort of “(self) care and repairing” that from the human body moves to the environment. Together with other feminist hackers she promotes the creation of feminist hardware, that is a type of ethical hardware, for example created in fair working conditions, without harming the environment and avoiding product chains related to mining, and with the use of self produced and recycled electronic  components.

Following this, Coded Bodies by Giulia Tomasello, Italian interaction designer, she works in the field of wearables technologies and biological fabrics, with particular reference to women’s intimate well-being. During her workshop participants learned the basics of wearable biotechnology through Do It Yourself – DIY techniques and made some electronic sensors in fabric and bioplastic. Giulia Tomasello is certainly a virtuous example for every women entering the world of innovation. The designer works to achieve self-determination of well-being for themselves and the community in which you live: she defines it Girl Biophilia, a sort of biotechnology domestication practice for self-care control, through the participation of women in the scientific and technological culture. 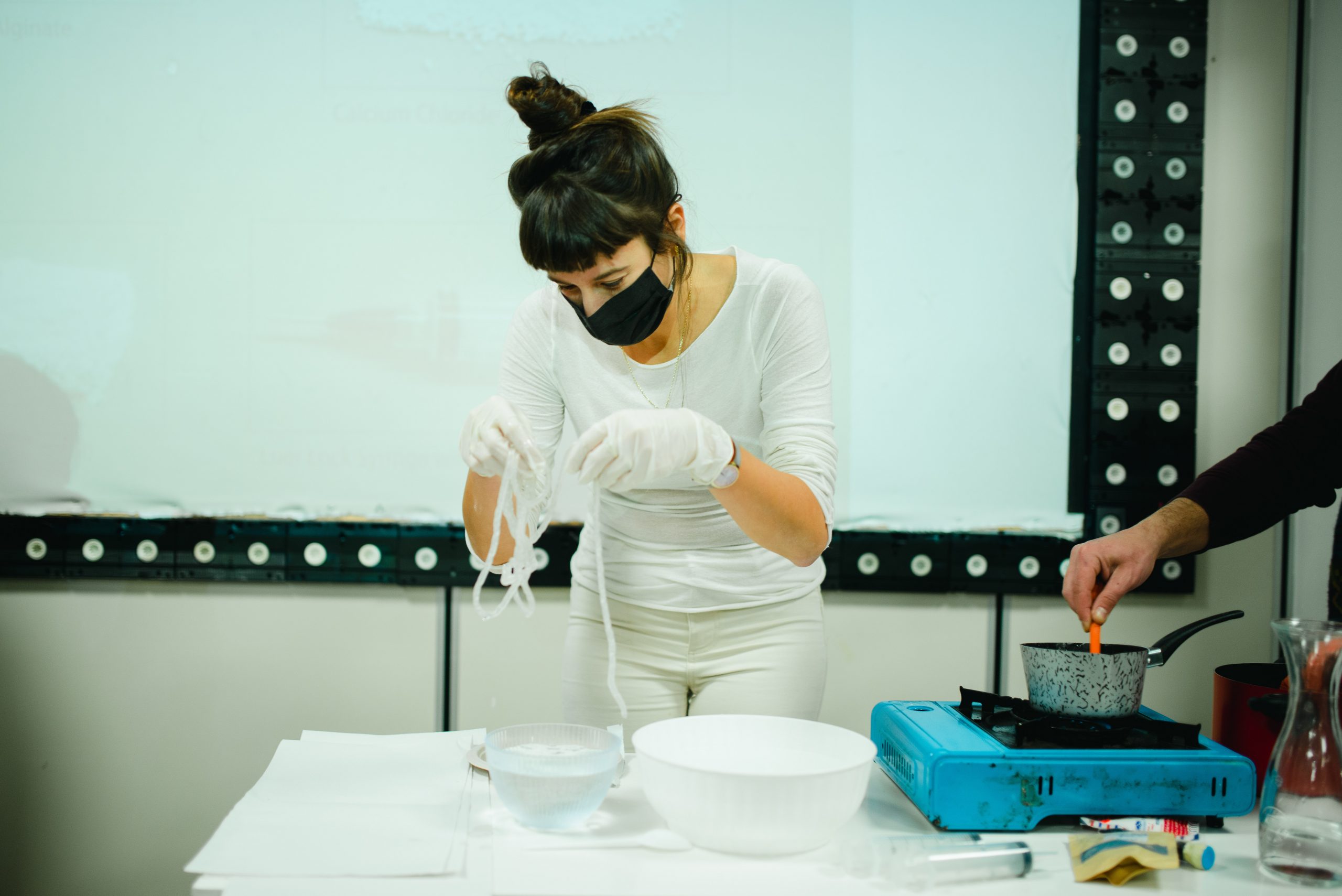 In conclusion, I congratulate the team that courageously created this edition completely in presence, with the hope that the next exhibition, scheduled for 2022, will be the birth of a permanent and continuous practice in the social and economic context that has been involved during this event.