FACT excels at recreating magical spaces from nothing, but Aurora was something else. This site-specific installation by Leeds-based ensemble Invisible Flock with international collaborators was going to open up art to the city, and open hearts to the magic of something we take for granted daily. It was the one exhibition that caught the imagination of Merseysiders, whether they were art lovers or not. Who even knew that Liverpool’s Toxteth district was home to a disused reservoir? Constructed by the Victorians in 1845, then closed in 1997, Toxteth Reservoir was once home to residents’ drinking water.

All I knew was that I had to wear wellies. I went even further, sporting the waterproof outdoor trousers I had bought three years earlier, for my trip to Reykjavik when I went to see the Northern Lights. This time I wouldn’t need to go so far. The fact there was a safety briefing made me nervous. To me, safety briefings are indicative of death. But if we were to walk on water that day, then we were to demonstrate our faith in miracles. Soon afterwards, we were led to a sandstone fortress: square, almost concave, with a tower visible from one of the corners.

Stepping into the inky darkness of the interior, I felt destabilised, my night vision slow to kick in. The walkways were illuminated by laser beams. Stumbling into the puddles flooding the space, I had no choice but to follow the other visitors around the path marked out by bright strips of light. To recalibrate your senses is surely the goal of all artists? With our certainty of the physical world and our trust in our own capabilities called into question, we were ready to receive this installation, just as a church congregation prepares to receive that other miracle: the host.

Uneasy, we crept through the shallow waters until we came across cuboid ice sculptures which lit up our already heightened moods, exciting a kaleidoscopic frenzy. The illuminated forms within the resin-like blocks, cold and responsive to the touch of curious hands, resembled fossils or organs in suspended animation: the cracks appearing as veins. Around the edges of the room, you could make out the warm-neutral glow of sand-coloured Victorian arches, incongruous with the luminosity within the spectacle itself. 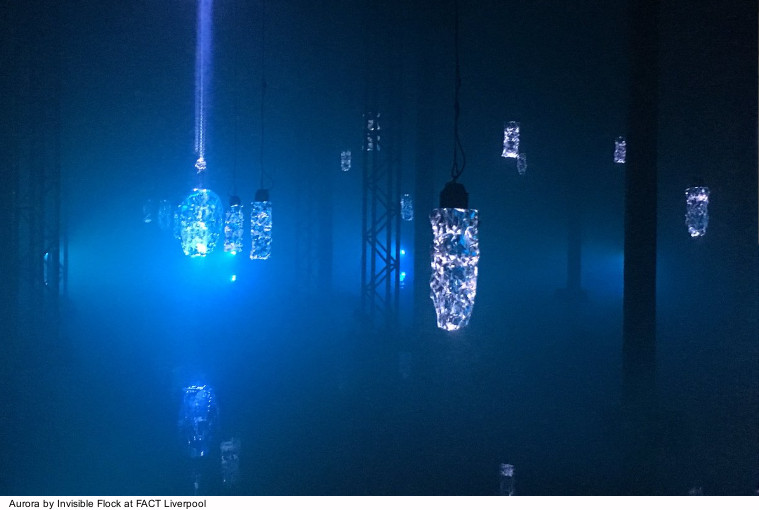 Centre stage, the slowly transitioning festival for the eyes leaked yellow and green, the colours of the Aurora Borealis, a phenomenon we associate with magic, magnetism and the festive connotations of the Arctic Circle.

A party of ice jewel pendants dangling from the invisible ceiling caught the rays between lonely steel pillars. I caught myself musing that if water is more precious than gold, could it be (besides the obvious) because water becomes diamond-like in easily achievable circumstances? Ice diamonds are temporary, and what doesn’t last forever is regarded as precious, just like the seasons and life itself.

H20 is eternal, but its life-giving qualities and current distribution are preserved only by our careful stewardship of both society and planet. Creative director of Invisible Flock, Victoria Pratt relates: “Aurora uses cutting-edge technology to present water as a substance, a body, a spiritual entity and not simply a utility. In the driest summer on record [in the UK] it could not be a more appropriate time to have this conversation about water, to explore absence but also excess.”

The show continued with a long series of flashing of lights punctuated with dark spells; ubiquitous blue-white reflections; laser beams cutting through the obscurity in purple and green; water holding a mirror to the light show above, throwing the exhibition into new dimensions. 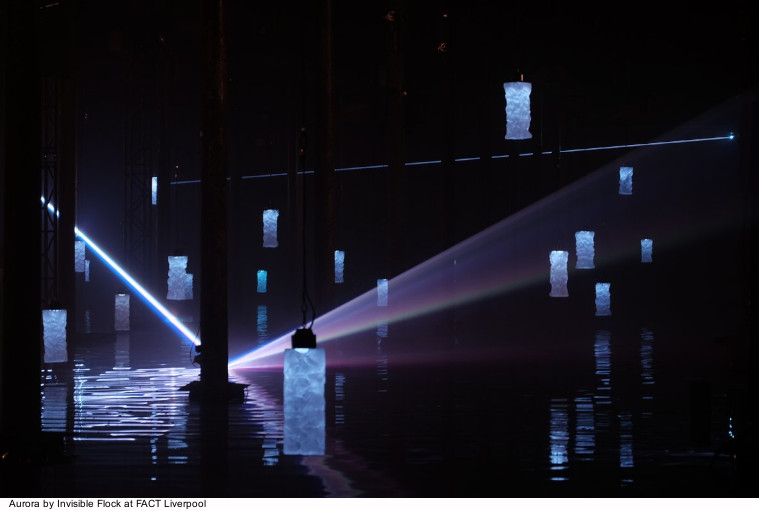 We are alerted to the presence of water simply through the sound, that recognition programmed within us as part of our survival instinct. Water could be heard all around, and soon, the effortless and gentle trickling of water was replaced by the torrential downpour of the tropics.

Travelling through a lively, engaging and atmospheric soundscape, the music rose subtly towards a dramatic crescendo; I felt the shocking vibrations bouncing off my sternum. Then suddenly, silence and the sound of our own thoughts and questions before being dispatched back into an unknown Liverpool neighbourhood.

A secular space for meditation

Within a 45-minute pocket of time, the show offered visitors fresh eyes to view our most precious resource. Aurora succeeded in provoking internal questioning and encouraged those philosophical conversations we shut out of our minds in everyday life. The reservoir provided a secular space for meditation we could all get on board with. 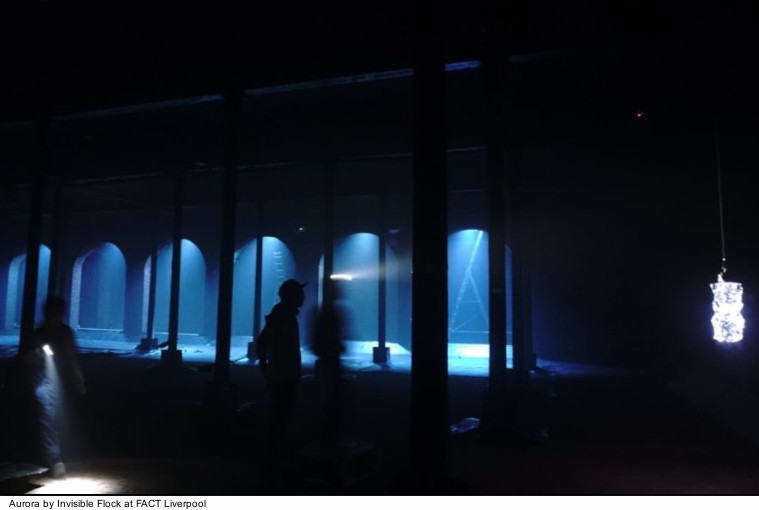 The exhibition was not alienating for the everyday punter, going beyond simply being an art installation accessible to those in the know.  It fulfilled its mission to create a multisensory experience delivering on the “sights, sounds and wonder” of planet Earth.