This article has been written with Sarah Grant

Taking a break from the electricity driven polarities and other implementations of Boolean logic[1], this text focuses on decision making algorithms expressed as life’s basic need: the search for food. Through design and observations of the experiments with the Physarum polycephalum, generally known as slime mould, food distribution setups become an experimental playground for modeling complex communication behaviours. During a short residency at the Institute for Experimental Design and Media Cultures’ Critical Media Lab, artist and critical engineer Sarah Grant collaborated with Selena Savic, as part of the Thinking Toys for Commoning research project. Together they explored communication across the slime mould body with an interest in network topology and resource sharing. In the lines that follow, we will discuss what we learned from the slime mould and how this can be understood in the context of communities self-organisation.

The Thinking Toys for Commoning project is informed by communities organised around sustainable cooperative housing. With a playful approach to computational modelling, the team explores concrete scenarios and topics relevant to resource sharing and care. Sarah Grant’s residency weaves her work on bio-technical entanglements[2] with questions of computational modeling of complex information sharing mechanisms, across the body slime mould.

Slime mould in the forest, laboratory and art studio 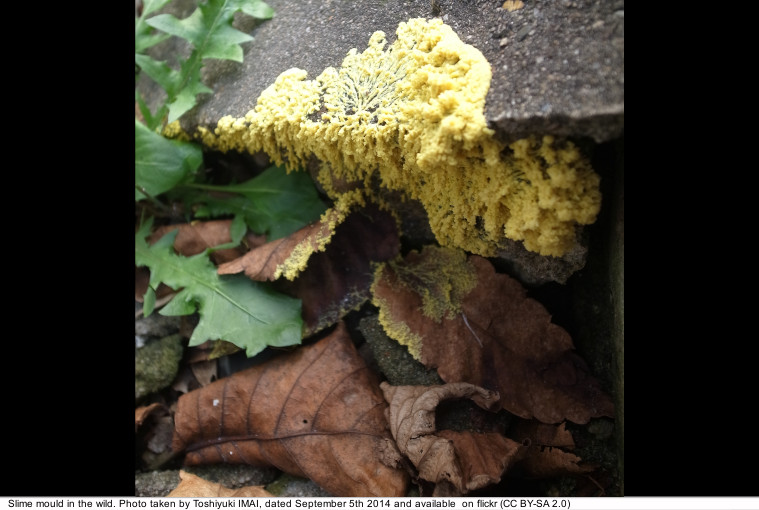 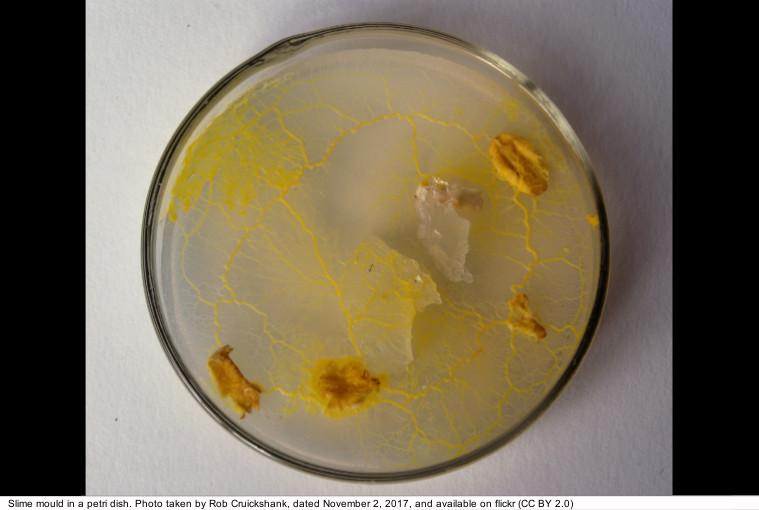 Physarum polycephalum is an acellular slime mould. In its feeding stage (plasmodial form[3]), it resembles a small patch of a bright yellow mucous. The many-headed  (polycephalum) slime is a sac of cytoplasm[4] containing a multitude of individual nuclei. In nature, it lives in forests, inhabiting damp leaf litter and slowly swarming through its environment to feed on bacteria, fungi, and other microorganisms.

Although it does not have a centralized ‘brain’ or ‘memory storage’ it exhibits behaviour that could be called proto-intelligent or cognisant; it is able to solve mazes[5] and compute shortest paths in a network[6]. Scientists thus used slime mould a working model of decentralised modes of organisation. They give it ‘tasks’ and then observe how it problem solves.

Artists also like to work with this ambiguous organism. Hybrid media artist Vanessa Lorenzo often works with micro-flora and fauna of our urban environment in poetic and unsettling ways[7]. Teresa Schubert, who identifies her practice with post-media tendencies, often uses slime mould as an aesthetic catalyst but also to question her connection with the other (humans and non-humans, nature), often through skin[8].

Engineer and creative practitioner Agnes Cameron examined the use of slime mould as a model for network resilience[9]. Operating in a similar direction to the transfer of ideas between Thinking Toys for Commoning project and Grant’s residency (agent-based modeling informing slime mould experiments, discussed in the following chapter), Cameron created computational models (cellular automata) that were then “verified” in experiments with living Physarum colonies. She explored the interest in self-optimisation of networked communication by observing the flow of plasmodium – information flow – between the nodes, using slime mould organism as a metaphor for telecommunication networks.

Could we model resource sharing, as it is done in a housing cooperative, with the slime mould networks? To investigate how communication flows and how resources are shared within a network of interdependent nodes, Sarah Grant worked with Physarum polycephalum (slime mould) in the context of the Thinking Toys for Commoning project.

How is information shared within a living, decentralized network? How can we keep track of information as it makes its way through these networks?

At the Critical Media lab, we set up nine experimental designs of network topologies to observe how communication models made of slime mould evolve in different instances of the organism, driven by different conditions for cooperation: 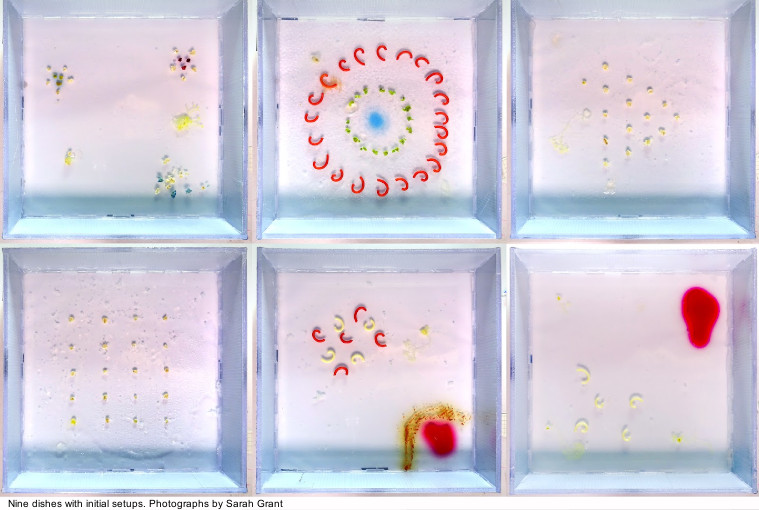 Slime moulds were placed in equal, square dishes that we produced for the purpose of this experiment. These designs were based on a careful placement of attractants (food that slime mould likes, such as honey, oats and pasta) and repellents (such as hot spices or salt) in the agar-agar growth substrate.  We expected that honey would be its’ most preferred food and that it would try to overcome obstacles in order to get it; that oat is its next best choice of food, and pasta is a third, acceptable choice. Sarah played with spacing between the food sources and their regularity, painting food sources with natural food colourings so that she could observe how the cell is communicating, how it moves information across its body and how evenly the different food sources are distributed throughout the organism. How do different network topologies affect the efficiency of sharing food and the flow of information?

Beyond these pragmatic questions, our interest in slime mould is driven by an ambition to challenge the conceptual differences and practical similarities between the way computer models and model organisms operate and are used in research and artistic contexts.

Growing community-topologies and communicating across the cell

The slime mould growth was determined by food sources: once it discovered oats, it would establish thicker network paths around it, and between different pieces of oats placed in dishes. If sources were close to each other, the body would establish a mesh network for food in a couple of days. If it found nothing, it left traces in the form of extracellular deposit as an externalized spatial memory and refrains from exploring the same unresourceful area twice.

When offered food in concentric circles and placed at equal distances from the two circles, Physarum preferred to make rings and consume closer food sources than to explore the space centripetally. In ‘scarcity’ scenarios, it focused on ‘islands’ of food sources before foraging to meet other parts. The exploration of equally distributed food sources in regular field setups (triangle and square) worked as expected: food sources were relatively close to each other so it moved between exploring further and consuming nearby in an equal manner, gradually covering the area equally. 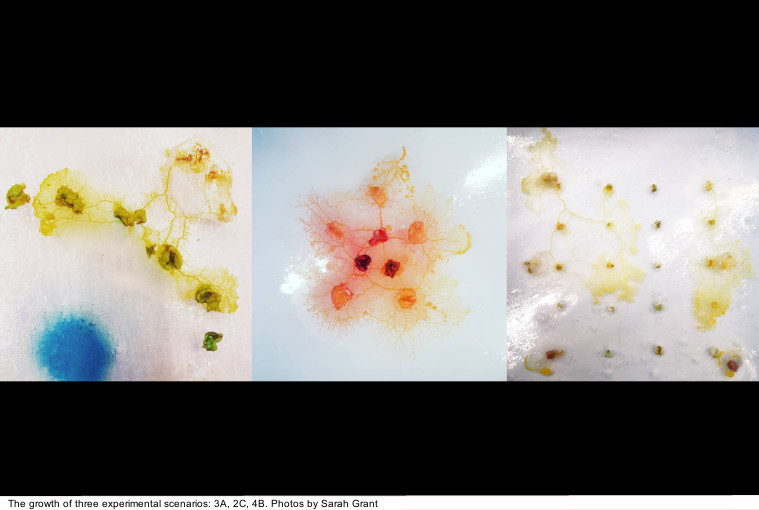 The preference for honey did not work as expected. Across the different setups where honey was used to attract the Physarum it avoided it in necessarily large movements; honey was painted red or blue, and it is possible that this particular food colouring caused the unexpected behaviour. In one particular setup, n.3 (centralised, concentric circles), left for a couple of days to grow undisturbed, Physarum went everywhere and explored the dish in circles, two or three times before reaching for honey. In another instance, it consumed honey only after a full week of exploring the rest of the environment and food sources. The most extreme case was that of the setup with repellent (scarcity vs. luxury) where hot paprika powder was used as a “wall” around a spot of honey. Physarum did eventually reach the honey, in a little less than a week. 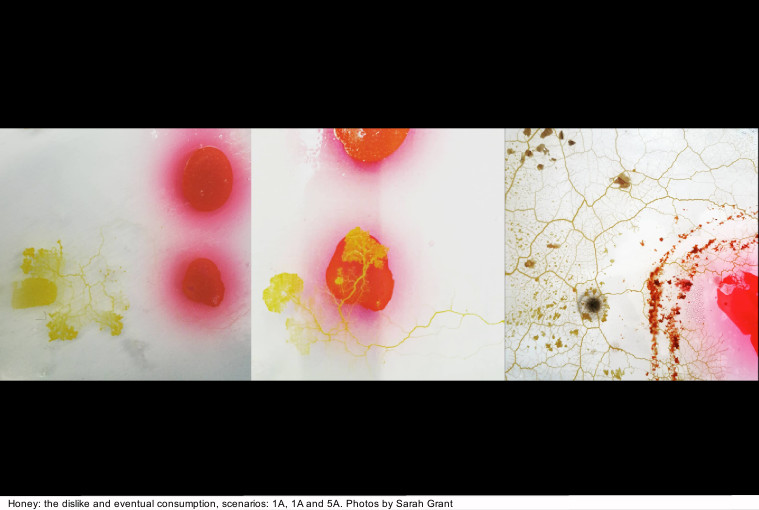 When left without food, and in too much light, the plasmodium enters its reproductive phase, transitioning into sporangium. During this time, stalks emerge from the surface of the slime mould, each holding a fruiting body containing a spore ready for sexual reproduction. Once environmental conditions are favorable again, the spores emerge from the fruiting bodies and join together to form new plasmodiums, and so the life cycle begins again. 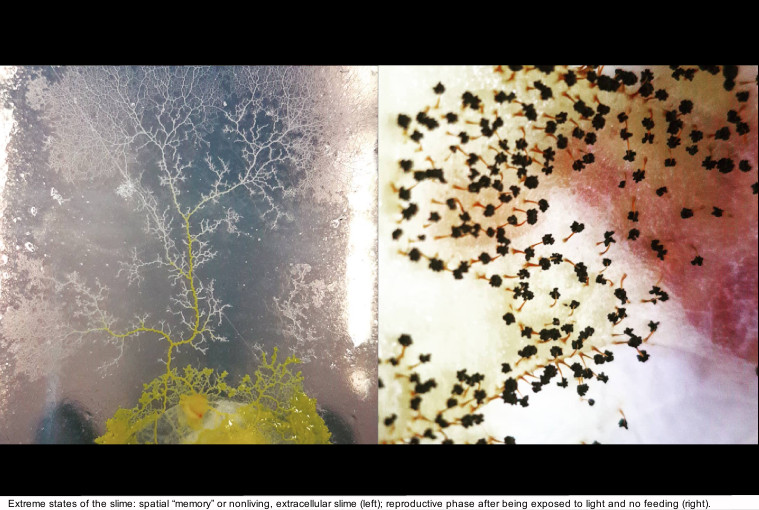 What can we learn with slime mould?

Both model organisms and computer models are instrumentalized in scientific research. They are rendered ‘useful’ and used as tools, as instruments of measuring up the real world. Different from our project, the aim in such approaches is to optimise the functioning of a (technical) system by implementing observed mechanisms in slime mould’s behaviour. Adam Adamatzky, a prolific researcher of slime mould in the context of computation searches for novel principles of efficient information processing and computation: he proposed to use slime mould as logical gates[10].

In artistic and design-based research projects, such as the work developed over the course of Sarah Grant’s residency, the relationship between computation and organisation is many-directional. Model organism – slime mould is doing the work of a computer model, but we do not expect to see predictions or realistic simulations. Slime mould computes, nevertheless, and communicates. The interest in the way it communicates supports our ability to move between the real world and its abstraction in a productive manner in our articulations of these experiments.

How would this be compared to communication in a housing cooperative? By carefully observing the flow of colour through the tubes with a microscope, we could trace the interaction of the slime mould body with food sources and areas of the dish. If we would decide to treat these flowing particles as messages or packets, we could find most optimal paths for transmissions in the different setups (centralized, sparse or regularly distributed nodes). But the point of the curious (even naive) attitude is to remain undecided about the exact translations (particles to packets) and articulate transformative ways to compare the slime mould processes to networked communication. 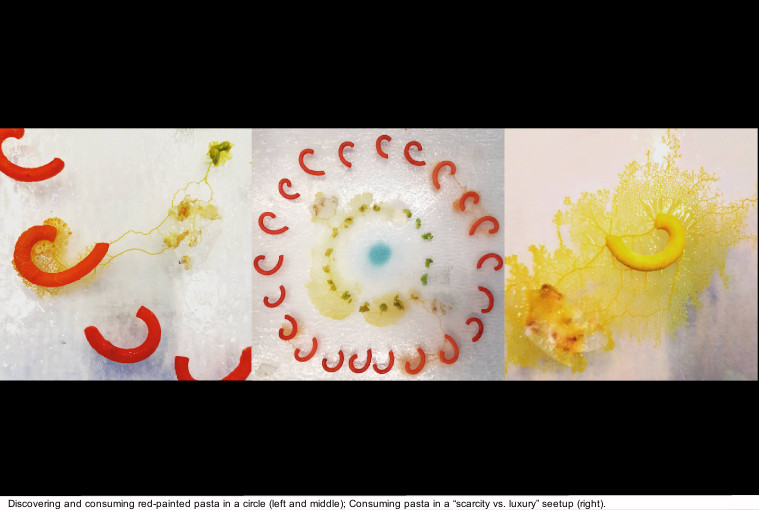 [1] By polarities and boolean logic I am referring to the practice of encoding information as sequences of 0 and 1, or computation driven by information flow through logic gates, that can have “true” or “false” states. See more on:  https://en.wikipedia.org/wiki/Boolean_algebra This current computational paradigm reproduces and reinforces sampling of the world and society onto binaries such as “man” and “woman”.

[2] See for example Grant’s talk on Visceral Systems given at the 34th Chaos Computer Congress in Leipzig, 2017 media.ccc.de/v/34c3-9290-visceral_systems or more recent experiments with Bio-computing with slime mould criticalengineering.org/intensives/2018/#biocomputing

[3] A plasmodium is a living structure of cytoplasm (see footnote 4) that contains many nuclei, rather than being divided into individual cells each with a single nucleus. It is the feeding stage of slime molds.

[4] Cytoplasm is a thick solution that fills each cell and is enclosed by the cell membrane. It is mainly composed of water, salts, and proteins.

[7] For an overview of Vanessa Lorenzo’s projects, including workshops and collaborations, see: https://vlorenzolana.myportfolio.com/projects