Astrophysicists at the Research Institute into the Fundamental Laws of the Universe (CEA Irfu, Paris-Saclay) have granted Kurokawa the unique opportunity to explore data taken from giant molecular clouds in space – data which may hold the secrets behind the birth of stars. Using these previously undocumented findings, Kurokawa has developed a new body of work, unfold. The exhibition at FACT marks the world premiere of bringing this data to life.

New commission, unfold, explores the birth and evolution of stars offering viewers an artistic, yet scientific, representation of how the solar system was born, and how our galaxy might evolve. Kurokawa will construct his vision of a molecular cloud as close as possible to the scientific truth using striking 3D representations of space, combined with interpretations of how star clusters form within the cloud until the birth of sun-like stars. 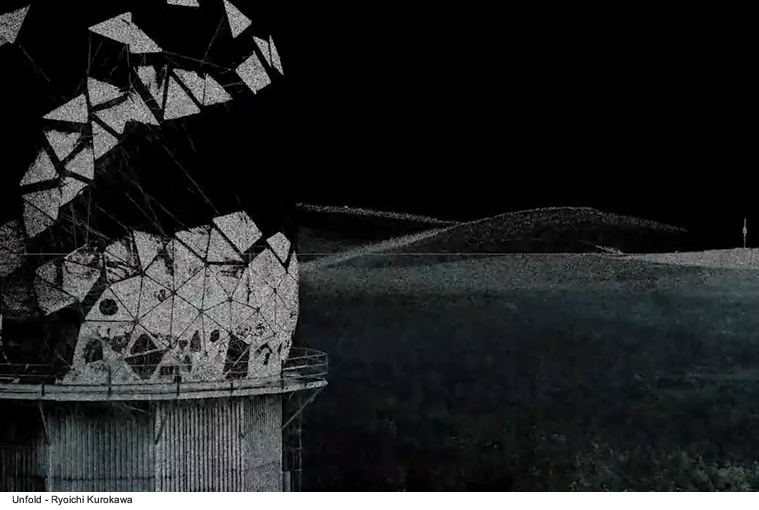 This new project will be presented as a large scale multi-screen and surround sound work in Gallery 1, as well as other iterations throughout the FACT building and surrounding area. Cutting edge audiovisual technology will be used to enhance the artist’s breath-taking reimagining of scientific data and its accompanying soundscape.

This exhibition marks the outcome of a period of extensive research from Ryoichi Kurokawa, in collaboration with Vincent Minier, astrophysicist at CEA Irfu, Paris Saclay.

Ryoichi Kurokawa is known for his stunning performances and multi-screen installations. His concert pieces, video, recordings and installations have been shown across the world at international festivals and museums from Tate Modern to the Venice Biennale. His vast time-based works create, mesmerising environments which take on the appearance of sculpture, combining audio and visual in spectacular, synchronised experiences where sound and image become a single unit.

This show will present a unique dialogue between science and art that will allow audience members to learn about cosmic phenomena and the formation of the solar system. It will offer a platform for scientists and astrophysicists to open up their research to the public and raise awareness about their years of intense work, whilst pioneering multi-disciplinary research to create a groundbreaking and unforgettable audiovisual artwork.

Unfold is co-commissioned between FACT, Stereolux and University of Salford Art Collection, with the support of CEA Irfu, Paris-Saclay, Arcadi and DICRéAM. With support from the Goethe-Institut London.