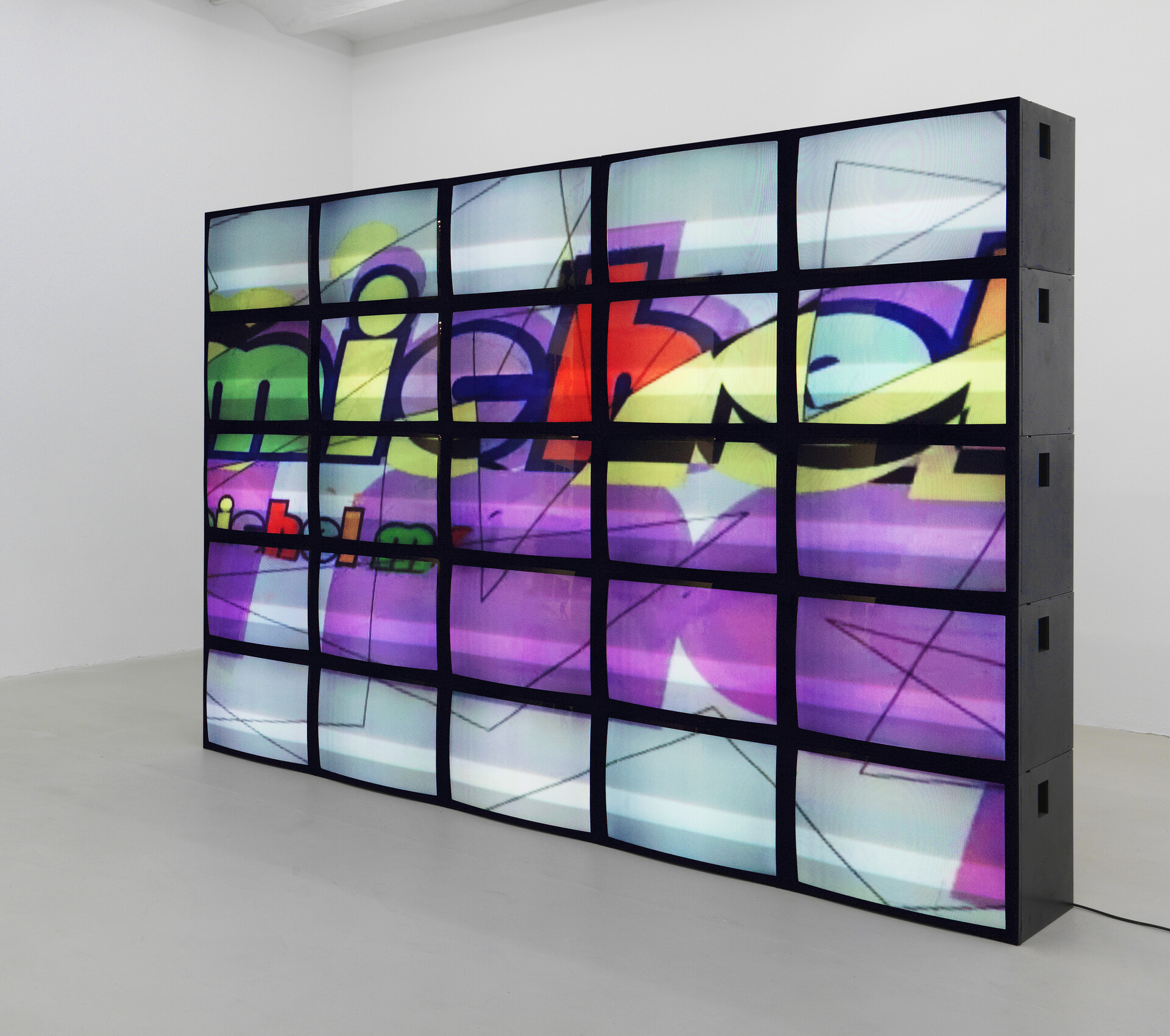 The work of Michel Majerus negotiates social paradigms that unfolded in the 1990s and continue to influence us today: the start of the virtual age with the increasing presence of computers and the internet, the spread of mass media, the world of advertising, and pop and youth culture. His large-scale paintings, expansive wall works, and monumental installations embody an artistic reflection on the digital turn and the overflow of imagery that characterizes social networks today. His work reveals a non-hierarchical and discursive understanding of the image, in which quotations, seriality, and temporality play a central role, blurring the boundaries between the art world an everyday life.

The exhibition at Neuer Berliner Kunstverein highlights Majerus’s installations as a central means of expression in his practice. They comprise an extensive video installation, key wall works and spatial designs, as well as sculptural models conceived for site-specific, large-scale projects and presented here for the first time. They convey the intermedial specificity of his artwork, his reflections on mass media, and his method of creating spaces for nuanced aesthetic experiences.

Young-Hae Chang Heavy Industries: PLEASE MISTAKE ME FOR NOBODY

Neuer Berliner Kunstverein presents the first institutional solo exhibition in Germany of the Net Art pioneers Young-Hae Chang Heavy Industries, an art duo consisting of Young-hae Chang and Marc Voge (yhchang.com). The exhibition PLEASE MISTAKE ME FOR NOBODY brings together works from 2000 to 2020 that revolve around the theme of paranoia. Works such as OPERATION NUKOREA (2003) attain particular relevance in our times increasingly marked by wars and nuclear threats verging on reality. The work envisions a nuclear attack by North Korea on the South Korean capital of Seoul using vivid and disturbing language. Most of the works on display were translated specifically for this exhibition into German for the first time.

Since its inception in the late 1990s, YHCHI has developed a distinctive style through its negotiation of cultural identity, material inequalities, (police) violence, the confluence of fact and fiction, and geo-political realities, including the division of Korea. The works of the art duo are characterized by a high degree of abstraction that simultaneously constitutes its signature: YHCHI’s wide-ranging themes and interests are expressed almost exclusively through black writing on a white background. The text is synchronized to music that is often self-composed, building up sentence by sentence, word by word, or letter by letter.