Berlin has survived tumultuous change over the past century. The city has a distinct and multifaceted identity characterized by a history of cultural and political division, radical, trailblazing artists, calls for resistance, and an ongoing reshuffling of space and economies within the city. In Legacy, an original, animated, site-specific AR drawing in 360°, artist Nancy Baker Cahill aims to address the current threats of gentrification and climate change in Berlin while situating these challenges within the larger scope of the city’s past, present, and future.

Gentrification poses large and small violence to community, to history, to culture and to the city at large. Systemic gentrification has shaped living conditions and human geography of Berlin, seen from the displacement in eastern districts after the fall of the Berlin Wall, to the increased development across the city, heightened in the past decade. Climate change simultaneously will transform the city yet again, causing an urban heat bubble effect, drought, and extreme weather. Certainly, both destabilizing systems have related effects: dismantling social structures and altering the cultural and social environment.

The artwork, originally commissioned by SXSW, illustrates the calamitous forces of dislocation and climate change by animating an abstracted tree as it twists, breaks apart, and coalesces. Formally the drawing transitions from organic bark-like marks, to inorganic, metaphorically urban, glass and mirror fragments. 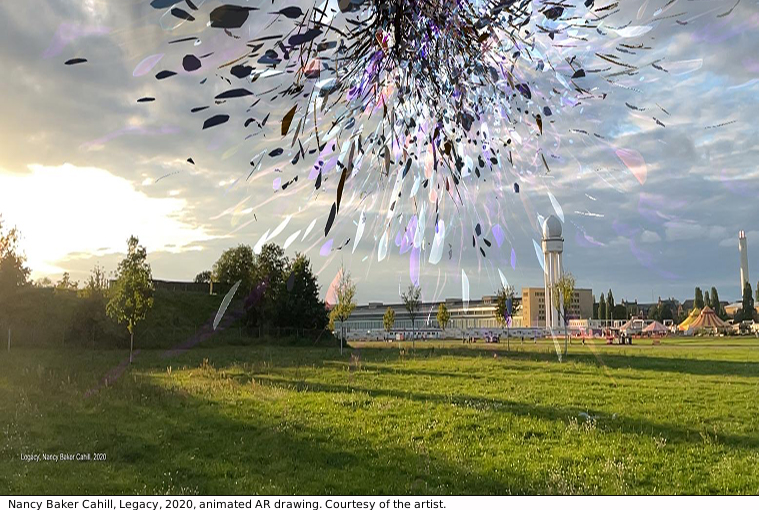 Using original digital mark making to render organic forms underscores the artist’s intention to highlight unnatural developments of all kinds. Accessed via smartphones and tablets, the monumental drawing remains invisible to the naked eye, and leaves no physical trace. Legacy emerged from Baker Cahill’s intention to realize the synthesis of ideas, technology, and art to transform awareness about the urgent and interrelated effects of inequality and human-centered decision making. The drawing attempts to push new media in uncharted directions, and prompt discoveries related to the (re)evolution of nature, and the accelerated consequences of human intervention and impact.

The exhibition is generously supported by the US Embassy in Berlin and is authorized by Grün Berlin.