ARTificial Garden, The border between us

The pandemic which upended the world has unexpectedly made our society a place of voluntary confinement. Due to the nationwide social “distancing” measures, physical distance and invisible borders are now between us. Moreover, as the close distance between humans and animals was pointed out as one of the main culprits of the pandemic, the distance and problematic relationship etween us and “them” have garnered attention. They say that the coexistence between humans and nature is impossible based on the tragic presupposition that the earth cannot exist as long as there are humans.

The exhibition is about the human-centered way of thinking and our perspectives on animals and plants against the backdrop of the current crisis that bears multilayered meanings of the border of relationships. The exhibition views humans and nature, especially animals and plants, within the frame of “woori” and visualizes the borders between us that can/cannot be seen. The exhibition interprets the word “woori” ambiguously—expanding the definition of “woori(we)” to include animals and plants as well as humans while raising a question that what would be the difference between confinement and protection if one is kept inside of the physical boundary of
“woori(cage)” in which animals in zoos and plants in botanical gardens live in a state of permanent confinement. By examining these questions, the exhibition contemplates what is needed for us (“we”) to live with others in a “cage” and the ways in which the arts can give shape to such thoughts. This exhibition, as a zoo without animals and a botanical garden without plants, will provide an opportunity to think about the appropriate distance between woori(we) and woori(cage), and the establishment of relationships. 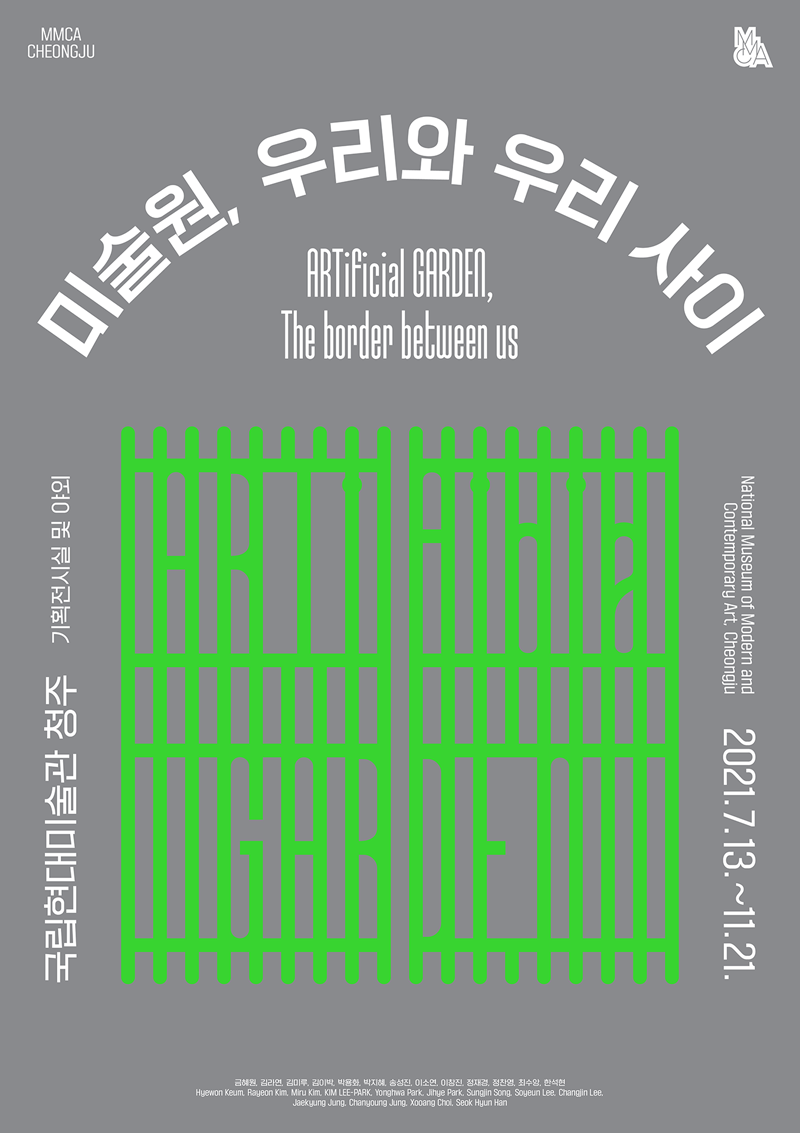 Courtesy of National Museum of Modern and Contemporary Art, Cheongju.

The border between us

In general, we use the Korean word “woori” (which means “we/us” in English) when we refer to a group of people including ourselves in a friendly way. At the same time, the word “woori” bears another meaning—“cage,” a place where animals and livestock are kept and raised. The expression “woori” thereby encompasses emotional fellowship and exclusivism among groups that form a border as physical boundaries. The first step towards coexistence could be to look beyond the frame of “woori” and to start thinking about the meaning of “woori” and its relationship from the perspective of animals’ and plants’ instead. Only then can we think about appropriate distance and the meaning of relationship coming from an inclusive “woori” encompassing various concepts.

Humans, animals, and plants as species share and live together on the earth. All of us are living beings that coexist while keeping our distance from one another. However, even though each of us should live in our respective habitats, we are all living in an excessively overcrowded space in close proximity. This creates an uncomfortable coexistence in an unfamiliar place. Nature artificially made by humans sometimes takes the form of confinement and control. We can raise questions regarding what it is to be natural by thinking about the uncomfortable way of coexistence where humans understand and make decisions on nature from their own perspectives and interfere in the life and death of animals and plants.

At the border of city and nature

A well-organized city is a result of human lives, whereas nature is a place “beyond human touch.” As such, cities and nature are placed on two opposite sides. However, there is also nature tamed by human touch in urban areas. This kind of artificial nature, made with the purpose of enjoying both conveniences in life and born out of the desire for nature, depends on human choice. Human choice determines whether to live with it or to destroy it. We should think about life at the borderline between nature and artificiality—land upended by city construction, plants sticking out of an asphalted road, and animals abandoned at redevelopment sites.