Are we ready for a new revolution? Some reflections after Signal 2019

The first video projection onto a non-flat surface dates back to 1969 when some scary optical illusions such as a disembodied head were projected on the facade of a Disneyland ghost house to celebrate its opening. Since then a lot went on in the field, so now we can stand on a bridge on the Moldova river in a dark and pleasantly warm night in Prague, and staring at a huge green laser projection bouncing on the water surface turning it into a digital canvas. It is mid of October and we are facing the largest installation in the history of Signal, the light art festival which has become the main cultural event in the Czech Republic to date, made by the audiovisual artist and founder of electronic festival Lunchmeat Jakub Pešek. The green rays are projected from the opposite banksides, covering a 180.000 m3 surface and crossing each other in different configurations at the rhythm of the electronic music.

Comprehensively the theme of this 2019 edition, which took place from 10th to 13th of October, was the revolution: the 30th anniversary of the Czech Velvet Revolution, but also that of the present and the future, linked to the climate, social and technological changes of our time. In the light of 1989 events and on the brim of the fourth industrial revolution the festival proposed to make a point and ask ourselves if we are still ready today to get up from our sofas, overcome our laziness and convey all the protests in a real fight for a better world. Being deeply rooted in Czech history, but always open to an international perspective, Signal signature has always been trying to take a look at the future with a foot in the past, turning the back vision of a historical recurrence into a gaze to the future. 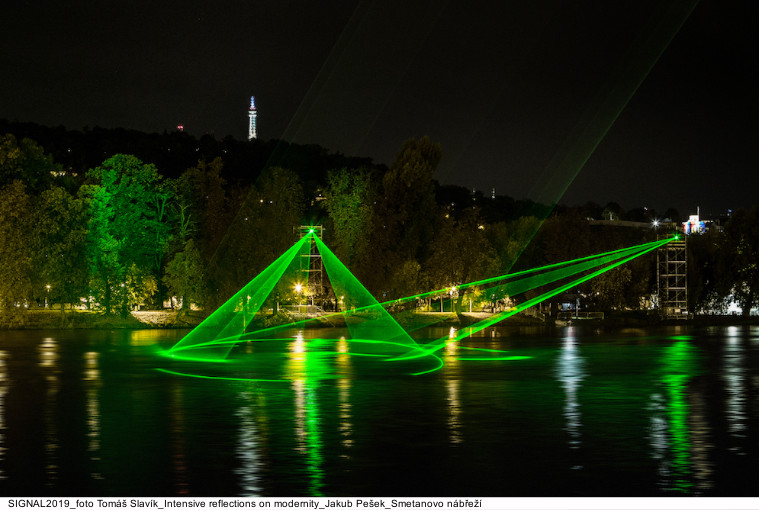 This year Signal presented a total of 18 works –  9 of which by foreign well-known media artists –  spread across 3 routes in the districts of Mala Strana, Old Town and Karlin; some of them were placed in new locations which brought visitors to discover places usually closed also to the Prague citizens like the Transport Ministry and the Invalidovna courtyard. Alongside Pešek the festival featured other Czech big names as the worldwide recognized architect Eva Jiřičná and her AI – DESIGN studio who has taken off the Vojan Gardens with a glowing meteorite of unknown origins shielded from a mirror: in order to see it, visitors had to look at their inner conscience first, facing at their own reflection for a few seconds while trying to get rid of all the falsehood and dishonesty hidden in their souls.

Artists from abroad included the Italian design studio Illo, which conveyed its colourful and playful aesthetic in Ottantanove, an engaging video mapping on how Velvet Revolution has raised and ended, and the artist/scientist Memo Atken, who declined the theme into a much wider sense. In the National Museum of Music, the Istanbul artist presented Simple Harmonic Motion such as a modern altar made by algorithms operations, music and light beams. Experiencing this installation was like take part in a ritual calling for a reconciliation of science and spirituality, in a world where the conflicts raise from the relationship between men and machines, and the revolution is the harmonic coexistence between the two. 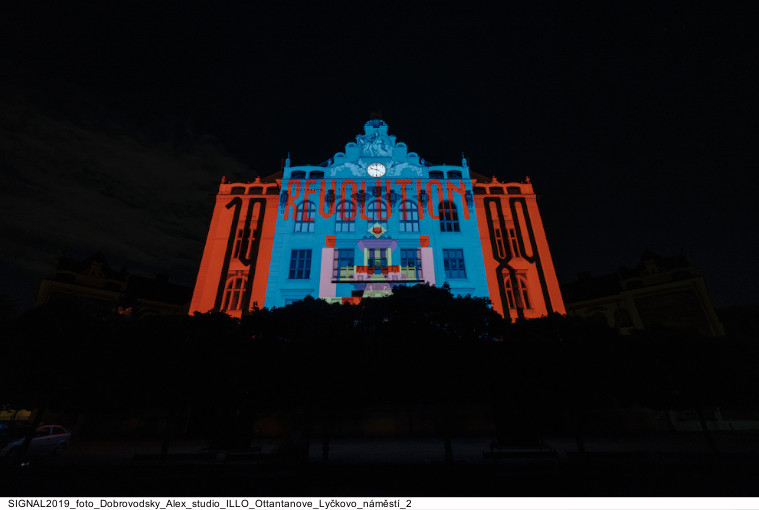 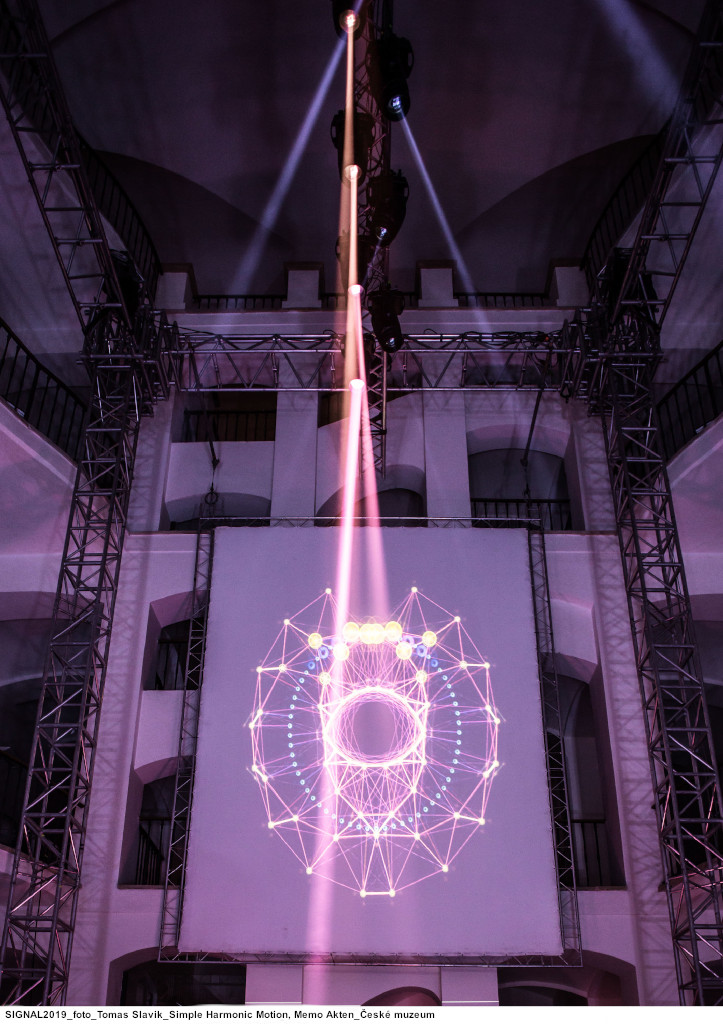 The theme of the revolution was addressed in its multifaced meanings also in the a.r.r.c. installation by Dreamlaser, which gave visitors a physical and spatialized experience of the growth of a revolution by means of red laser beams projected in the dark and winding space of the Kooperativa Gallery. Another kind of revolution, a spatial one this time, took place on the facade of the gothic cathedral of Saints Cyril and Methodius in Karlìn Square where Turkish collective Nohlab projected their video mapping Space and Possibilities.  Here a choreography of light and sound sapiently blended has played with the genius loci of the building dismembering and reassembling its surface and its substance as if it was completely malleable. Turning the architecture into a liquid matter, this installation challenged visitors’ perceptions with a never-ending metamorphosis.

Another holy building, The Klementinum Mirror Chapel, was colonized by fuse*, who hypnotized the visitors until the mid of the night with sequences of digital real time-generated images. Projected on a vertical space, and amplificated by two mirror surfaces on both sides, they rendered a quite eloquent idea of what infinity could mean. The installation was inspired by the multi-verse theory of the physicist Lee Smolin, who theorized the existence of parallel universes outside the space-time continuum. A similar operation, but on a smaller scale, was the Signal Soundscape experience: a thirty-minutes audiovisual concert by four young Czech artists that brought the outside weather in the insides of Salvator Church by means of music and a cloud of smoke that created a breathtaking space for meditation. 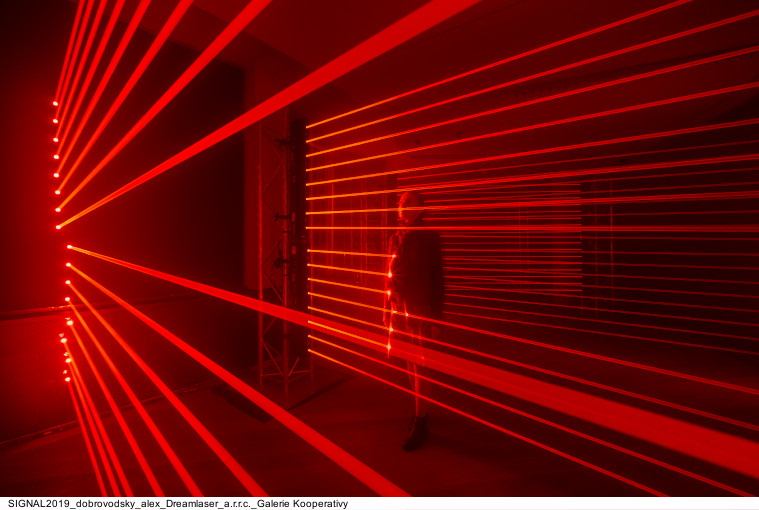 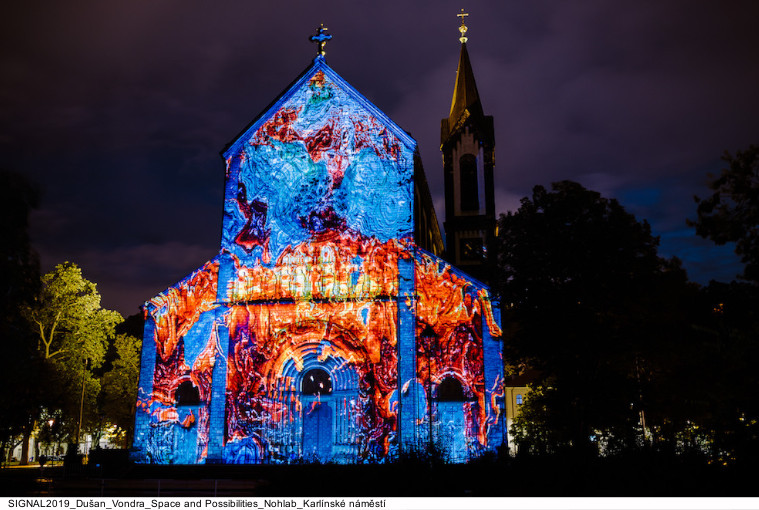 Apart from 1989 Revolution, 2019 marks also another anniversary: the one hundred years of the foundation of the Bauhaus School, to which German collective Giegling (born out of the same institution) gave its homage by transforming the Nostic Garden in Mala Strana into a performative playground made by moving sculptures. Alongside such a reach program how could not mention the panel discussions and artists interviews of Signal Transmit, the cinema with its film screenings of the works by most well-known digital artists, and the walks and program for kids Signal Playground. When the waters calmed down we have reached out for the festival director Martin Pošta to pull the strings of this just closed edition.

Federica Fontana: With this last edition you reach the 7th year of Signal: could you give us a brief overlook of how the festival has evolved in time? What is the role the festival now plays in the cultural life of Prague?

Martin Pošta: Signal Festival was established by studio Macula as a light festival especially focused on video mapping. When the festival started, video mapping was still a pretty new art discipline. That has little bit changed during the years and mostly in last 3 years Signal is transforming itself from festival of video mapping and light art to the festival of digital art and creative culture, which creates not only a number of new installations, but also a strong emotional and artistic experience with an emphasis on presenting contemporary visual artists and current social and environmental topics right in public space.

Signal Festival is now the most visited visual art festival in the Czech Republic. It is very popular and visited also by people who are not normally going to the galleries. Therefore, one of the most important roles of the festival is educating these visitors by presenting them the most interesting contemporary Czech visual artists right in public space. Festival is also trying to support the young local artists to enable them to create large scale installations and presenting them to a big amount of public as well as curators from other festivals. 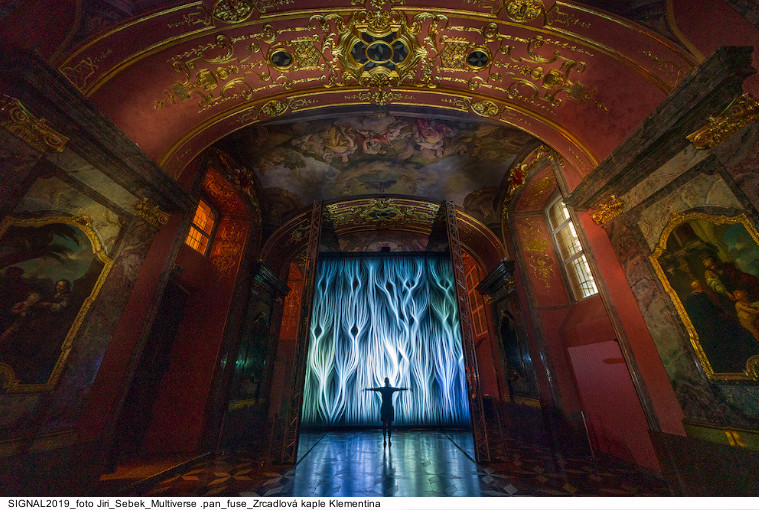 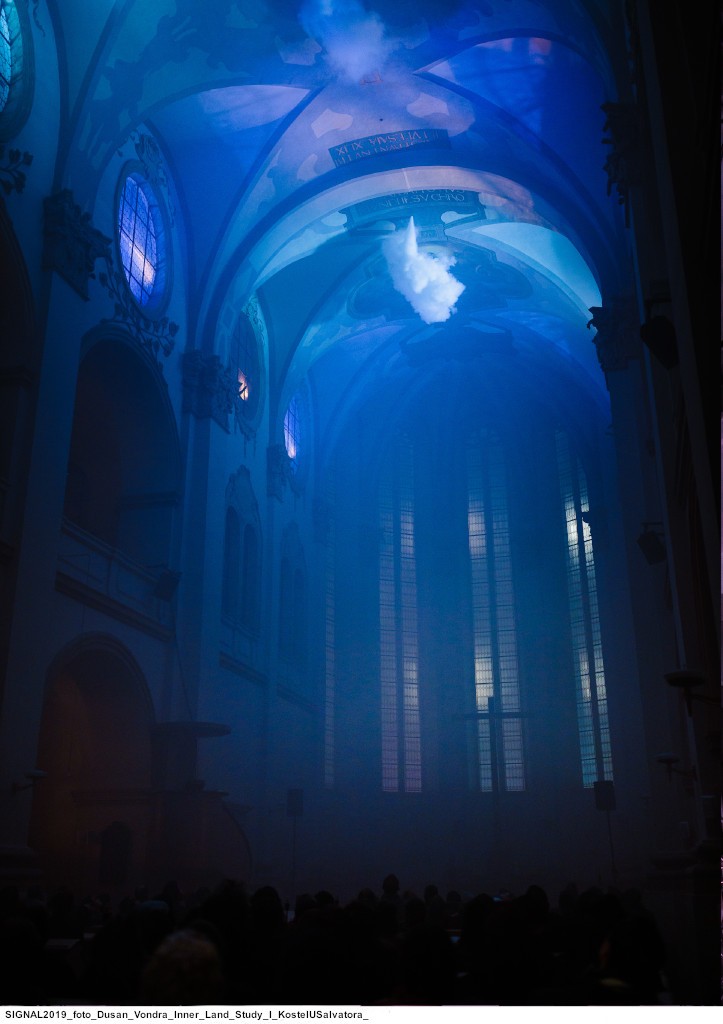 Federica Fontana: What are the main challenges in working with new media art installations, and in organizing an event in public space on such a scale? What was the project which gave you the hardest time this year?

Martin Pošta: Most of the installations are created for the festival and the first moment when you can see if they work or not is one day before the opening, and then it is pretty hard to change anything because you don’t have enough time for it. Therefore you have to use all your knowledge about large scale installations for the preparation. You have to curate the artists well because most of them don’t know as well as we know how to work in outdoor spaces in autumn weather and present an artwork to such a huge amount of visitors.

The biggest challenges are to get permission for new locations every year and to make everything on time because we have two or three days max to set up all the artworks. Most of this year’s projects were pretty complicated and took about 9 months of preparation. There is more than one which gave us a really hard time.

Federica Fontana: One of the highlights in the main program was a Signal production realized in collaboration with Post Bellum. What is the concept behind this project?

Martin Pošta: The idea was to present to the public one important historical event, which is not really well known by Prague residents. 30 years ago more than 15 000 East German refugees used the West German Embassy in Prague to get to West Germany. This event later led to the fall of the Berlin Wall. The refugees left thousands of East German cars Trabant in the streets of Malá Strana. We used these cars as a symbol of this event and created an installation named Trabi to inform the public about this historical event strongly connected to Prague. 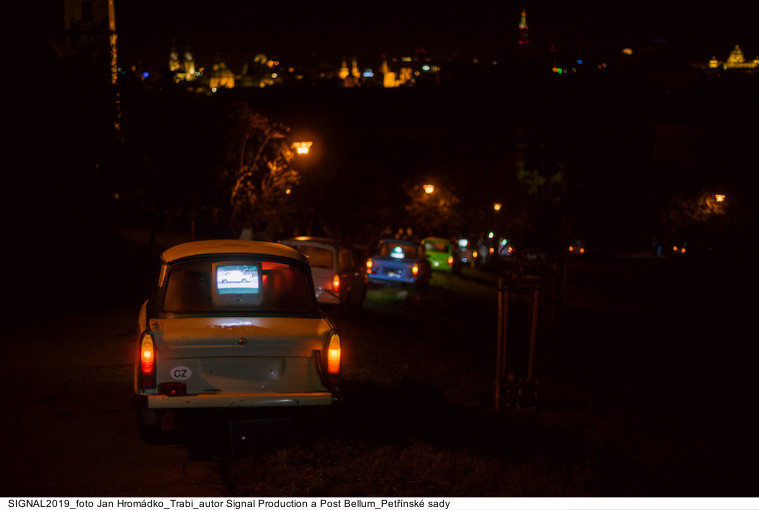 Federica Fontana: How would you describe the approach to curating of Signal creative board?

Martin Pošta: There are five people in the curator board. Each of them has a little bit different point of view on the evolution of the festival. What we have in common is a focus on presenting current social, technology and environment topics through artworks in public space. Each of the members of curator board has his wishlist of artists which have not to be just digital art or light art artist. From all these wishlists we are choosing around 20 artists with the goal to have half Czech and half foreign artists, as many women as possible, and also some young artists.

Federica Fontana: Signal 2019 was marked also by an eye on sustainability, thanks to a collaboration with Sázíme stromy (We plant trees). Could you explain to our readers which actions did you take to reduce the festival impact on the environment?

Martin Pošta: Anyone of us has an impact on the environment. Our neighborhood, the streets we go to work every day, the city we live in. What we create is important, but also what we leave behind is what matters. The festival creates emotions, it brings joy and confronts hundreds of thousands of people with digital and creative culture. But it also leaves traces in the city in which it takes place. We produce waste and then recycle it. We are using compostable dishes at our catering places, we are reducing plastics, we choose green energy for our installations, everywhere we can. Our merch is sustainable. We are working with non-profit, non-governmental organizations focusing on innovative environmental management. We are trying, but that is not enough. Next year we are planning more. 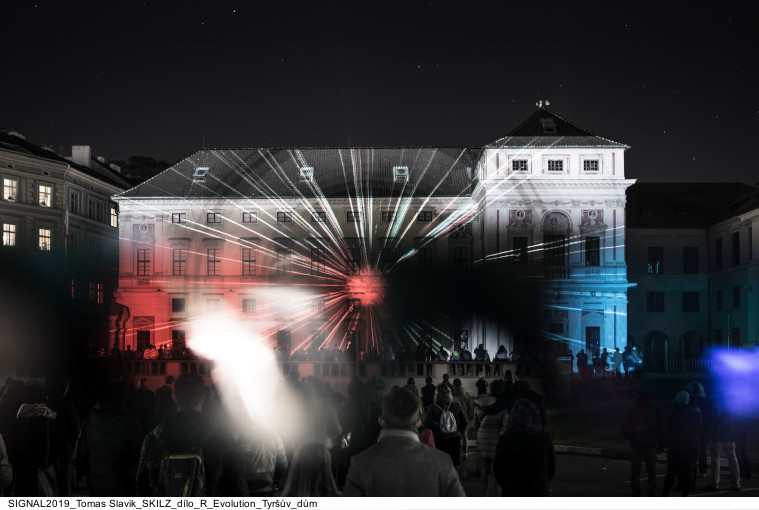 Federica Fontana: This year’s theme was Revolution, in relationship with the 30th anniversary of the Velvet Revolution. Some artists took the theme literally, linking their work to historical facts, others declined the theme in a wider, more universal sense. Looking back at the outcomes as a whole, what do you think: could we still talk about revolution today, at least in art?

Martin Pošta: If you look all around you, you will see many small and bigger revolutions happening in the world. I think there is a bigger need for social and environment changes than a need of a revolution in art, but art is a great and strong tool  to present the ideas of changes to the public.