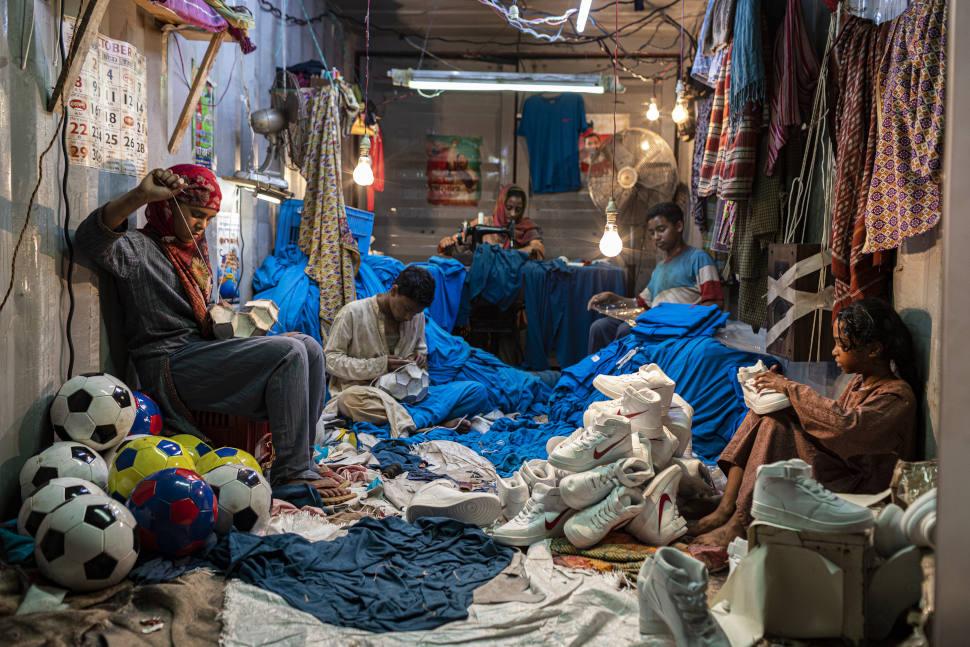 Initially presented at the IDFA in 2017, Container has now been included in the Venice Biennale competition Venice VR Expanded.
Container’s relevance is given by its capacity to make visible the ‘invisiblised’ bodies of our consumerist society by means of a virtual reality. The spectator is taken on a harrowing journey, where past and present forms of slavery are revealed in front of our eyes (and bodies) in the virtual reality. Through the visual metaphor of the shipping containers used to transport millions of tons of wares each year, the creators aim to shed light on “the circulation of commodities and people…trapped in modern-day slavery,” says Singh. He adds that “[t]he very notion of slavery is when human beings are turned into commodities”.

Directors were inspired by the deadly journey of the São José Paquete de Africa, a Portuguese slave ship that sank off the coast of Cape Town in 1794. Discovered decades ago by treasure hunters, people long believed it to be the wreckage of a Dutch merchant ship. Only in 2010 researchers realised that back in the 18th century the ship was used to transport slaves from Mozambique to Brazil before striking two reefs and sinking to the bottom of the sea.

Our journey begins at Clifton Beach, Cape Town, where there are the graves of at least two hundred enslaved man and women who drowned in 1794. Following chains deep down the sea, the spectators go in search of the ancestors, of the missing, of what hasn’t been given the right to rest yet. A shipping container emerges, and we enter the darkness within it. The first scenes show a presumably Afro-Asian woman while setting the table in an elegant 18th century living room. It is easily inferable that she is a domestic slave taking care of a colonial house (and family). After this, we meet another character, an African man wounded in a sugarcane plantation trying to escape the field. When he seems to have found his way out, he finds himself – and the spectator with him – in front of the metallic door of the container, with a huge sign on it that says “CAPITAL”. What follows is a continuously morphing representation of the darkest, spikiest societal issues within the metallic walls of a shipping container: a nonlinear world across time and space unravels in front of us, revealing different tableaus of the enslaved, silently suffering. The journey leads up to a container depot where boxes are packed and piled up, perpetuating the infinite circulation of goods, supporting the consumerist society enabled by the suffering of who was and still is trapped by servitude.

Somewhere in between a documentary and immersive journalism…

Poverty, slavery, and exploitation are at the centre of the attention in this artwork, which wants to make the wealthy spectators – quietly sitting in an exhibition space – profoundly aware of the invisible existence of the underprivileged of the world.

This VR experience is what I would put into the canon of Immersive Journalism, a type of journalism that peaked in popularity between 2015 and 2016. It is a form of journalism production that allows a first-person experience of events or stories that are usually described through texts in traditional journalism. Using tridimensionality and immersive technologies aiming at creating a sense of psychological presence, immersive journalism wants its audience to directly engage with the story. As being part of the event itself, audience members are provided with an unprecedented access to sights and sounds, feelings and emotions that accompany the news. In other examples of immersive journalism, sense of presence and empathy are reached through interactivity, while in this case interactivity is absent.  Container, in fact, takes the form of a documentary, where feelings of empathy and proximity are delivered by a type of immersivity based on a game of glances between the characters. Container is not a 360° immersive reality, as it is structured on 180° stereoscopic video. The viewer follows the journey by adopting the point of view of a moving camera, which follows and moves according to the eyes’ interactions among characters. Like so, audience members are just powerless, passive spectators of the atrocious lives of the invisibles. Instead of allowing the viewers to take action and change the course of the events, spectators are just given a hint of what they do (not do) in their everyday life to fight against the loop that exacerbates the pain of those enabling our late capitalist society. Moreover, the choice of putting everyone into containers is not casual: the container showcases the condition of being commodities, which, according to the author, is the very definition of slavery.

The powerless passivity of the spectators inside of the virtual experience reminds me of what Susan Sontag explains in her Regarding the pain of others (2002), written long before any form of digital fruition of the pain of others was possible. After ascertaining that we see images of violence everyday in our screens without being able to react – as if we are blocked in a dense cloud of apathy – she goes on by stating that the frustration of not being able to do anything about the pain of others can be translated into an accusation of indecency of regarding such images. In the current times, it seems that the sense of sight – considered as the most excellent sense according to the ancient Greeks – is now associated with a deficit (90-93). This refers also to the fact that sight – being in power to see and to look at the pain of others – give us a sense of fake proximity. Such proximity gives the viewers the impression of being sympathetic. As argued by Sontag – “as far as we feel sympathy, we feel we are not accomplices to what caused the suffering” (80). Such sympathy has also other side effects: it proclaims our innocence and our impotence, all at the same time. On the contrary, what is needed is a game-changer reflection on how “our privileges are located on the same map as their sufferings and may – in ways we might prefer not to imagine – be linked to their suffering” (81) as our wealth entails the poverty of others. Provoking images are not an effective tool to become aware of the interconnectedness of our existences. Perhaps experiencing the death and the harshness of the invisiblised lives by standing in front of them, incapable of doing anything to avoid their misery in a virtual reality might be one step ahead of that “initial spark” (81) that Susan Sontag praised.

Sontag, Susan (2002). Regarding the Pain of Others. New York: Picador.