Goliath: Playing with Reality by Barry Gene Murphy and May Abdalla 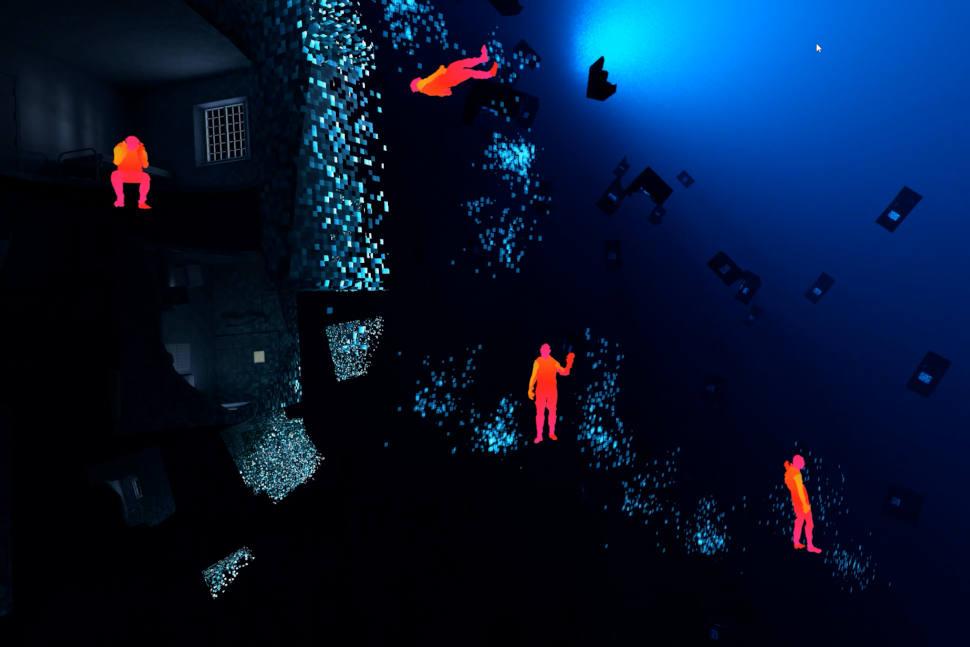 Premièred at the Venice Biennale 2021 as a competitor in the VR section, Goliath: Playing with Reality is an English and French production exploring the fragility of reality.

Inspired by a true story, this VR experience follows the true vicissitudes of Goliath, a man with a troubled childhood who has lost his parents and has been diagnosed with schizophrenia. The spectator gets to know him by chronologically travelling his life, mainly spent between psychiatric hospitals and online multiplayer computer games. Thanks to a unique combination of sincere conversations, mind-blowing animations and a high level of interaction, the spectator enters the world of Goliath, where multiple realities collide and slip into each other. In the author’s own words, Goliath wants to let us face with the spread prejudice and shame around mental health and the so-called psychiatric disorders and the marginalisation of those that present these problems. Besides that, this piece wants to better achieve a general understanding of the social role of online videogames in the existence of marginalised people.

As soon as you press the start button, you find yourself in the darkness. You can only distinguish some tentacles-like streams of pinkish pixels floating in the distance, all around you. Then, your hands appear in the virtual world and the voice of Echo (interpreted by Tilda Swinton) welcomes you. After inviting you to get used to the dark of the inside of a body and asking your name, Echo declares that reality is nothing but what your brain puts in the gap between what you see and what you feel. As a way to support Echo’s affirmation, your hands start morphing into spheres, cubes, then into one of those wooden games where you have to balance a tiny sphere on a horizontal surface and then, they go back to the initial form of spheres. Computer scientist and VR founder Jaron Lanier, in the first pages of his book Dawn of the New Everything (2017) wrote that the first time he saw something in virtual reality, he grasped the huge potential of the new technology when he looked at his hands in the virtual world. A bug in the software deformed it and made them huge. The shock engendered by his gigantic hands made him realise that virtual reality can be perceived as real as the everyday’s world. As a person passionate about VR technologies and its story, the opening sequence of Goliath reminded me of this episode in Lanier’s life.  As a matter of fact, as soon as you realise that your brain reacts and interacts with the deformations of your hands as if they were real, you get used to the new reality and starts enjoying the experience.

Immediately afterwards, you are thrown into Goliath’s childhood. The scenario hosting you transforms completely. From conversations you can hear and readable texts floating around your body, you understand that Goliath is diagnosed with schizophrenia and, after some seconds, that both of his parents pass away after a car accident. At this point, Goliath starts speaking for himself and reminiscing his life. The spectator is carried through his teenagers’ years by playing an old-fashioned Super Mario Bros-like videogame where a pixelated character – interpreting the protagonist – strolls around in the city with a dog and collects drinks, bar fights and pills. After some changes of scenarios and after an episode of violent psychosis, Goliath is taken to a psychiatric hospital and stays isolated there for an unknown number of years. When he gets out of the hospital, the spectator goes home with Goliath, where he starts taking part to online multiplayers video games, that are the only way he gets in touch with people. At some point, the only reality you are into is the videogame itself, and you find yourself playing with and against Goliath.

Reality is nothing but a shared game

Throughout the experience, Goliath is a body with no marked characteristics. The only two elements that change in his body are its size – Goliath gains weight as soon as he steps into the psychiatric hospital – and his head, which continuously shifts from being a question mark to an exclamation mark, passing through at least another ten more complicated punctuation marks. Goliath experiences confusion, disorientation, a lack of any real points of reference in his journey throughout the different realities of his life. And the spectator does the same, as you follow him through the different stages of his psychiatric disorder. The environment changes accordingly and works as an expansion of the feelings Goliath experiences in his lifetime, so that – as a spectator – you are completely merged into the depiction of Goliath’s emotions. For example, when the protagonist is isolated in the psychiatric hospital, the spectator finds herself floating in the infinite dullness of repetitive, empty days. You look around yourself and there is nothing but a greyish atmosphere upon which an infinite repetition of Goliath’s rooms and bodies emerge, leaving the spectator with no visual “escape path”.

The aesthetics of this 25 minutes long experience is based upon a visual language spectators are (more or less) very familiar with. There are glimpses of games that are part of your imaginary if you were born between the 1980’s and the 1990’s, bright colours and playful animations that remind of the contemporary aesthetics of videogames and Pixar’s short movies. This experience is built out of bricks of pop culture for the simple reason that Goliath’s mind is an offspring of our time. This results in a sense of proximity with the main character, that may well be a friend of ours, our brother, our cousin, a peer. This sense of proximity and empathy is also strengthened by the fact that the spectator’s experience of the virtual world works similarly to the way a person affected with schizophrenia (does not) makes sense of reality.  For instance, while you are shaking your arms and body as requested to play one of the most engaging parts of the experience, Echo reminds you that from the outside – from the outer reality’s point of view – you are behaving in a very weird way. This equates to the fact that, in that specific moment, you are not behaving as you would usually do in your real, everyday world. This implies that even if you are acting as required in the virtual world – and making sense of Goliath story as guided by the very experience of it –, you are diverging from the status of ‘normal’ which you agree upon as soon as you step out of the computer-designed world. Thus, this experience makes you aware of how easy it is to get confused between what is real and what is not. It makes you lose sight of the norms you should be mindful of, makes you feel like an outsider, exactly like a person that could be marginalized because of the weird way she acts. In this manner, the playful virtual reality you are temporarily inhabiting becomes your safe space, a space where your unusual actions make sense and where you can find someone to play with according to the rules of that specific (sub-)reality.

In this context, the virtual takes the shape of a game (or, if we want, of a reality) the rules of which you agree upon as soon as you become involved in it. Analogously, what we call real is nothing but a game. As Echo says in the final seconds of the experience, “[a]ll realities are imaginary. Only the reality we share endures”.

In the modest opinion of the author of this piece of text you are reading, Goliath: Playing with Reality is probably one of the best VR pieces out there at the moment. Goliath blends a touching story, a pile of interactive sensory exchanges, a hint of philosophical approach to reality together with a deep reflection on a socially relevant problem – the marginalization of “psychiatrically problematic” people – and the opening to the life of gamers. Therefore, this piece is part of this research as it is one of the highest points reached in the history of VR productions by now.

Lanier, Jaron (2017). Dawn of the New Everything: Encounters with Reality and Virtual Reality. New York: Henry Holt and Co.