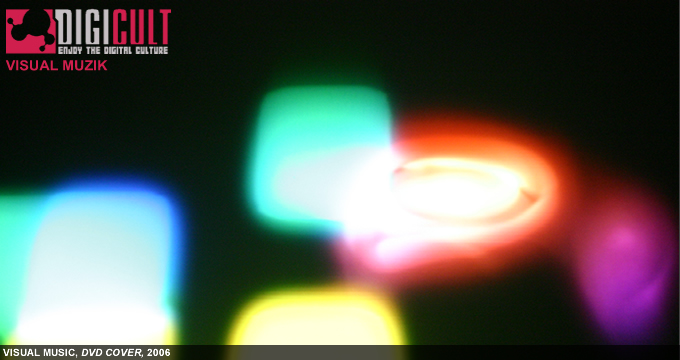 One of the more relevant characteristics of the video as an instrument, and its digital audio-visual arborescence that I think is worth talking about, is its indisputable capacity to transform the sensorial space that surrounds us into the object of research that characterises it. At the same time it manages to do so as a hybrid medium, capable of having different expressive methods within itself and being able to take on a predominant role in contemporary aesthetics… as well as in growing electronic mass culture.

Digicult collaborated with Dissonanze Festival in 2006 to curate all the program of the Theatre Hall at Palazzo dei Congressi, one of the three parts of the festival togheter with the Terrace and the Dancehall. A videoselection were prepared, called Visual Music, critically collecting some international audiovisual artists working on the aesthetic and synesthetic connection between sounds and images, both in live performances and videos.

A video-program of more than 8 hours, the screening was originally conceived as a long video program for 2 nights: for Plateaux Festival 2009 and for future invitations, it was reduced to 1 hour screening collecting the best videos included originally in the Dissonanze exhibition.

Visual Music presents itself as a complex and long path toward fruition of that process of analysis, spontaneous and unstoppable, that has characterised audio-visual research in most recent years.

A lot, and indeed almost everything, has been said about video as a means for communication and documentation but also as an instrument of perception and experimentation. It is not my intention therefore to add words to a book that has already been written. Video, compared to other “new media”, differs as it has been an object of research from the depths of the last century, in an interminable excursus between technical analysis and artistic expression, between analogical networks and digital euphoria, between narrative methods and audiovisual synchronies.

One of the more relevant characteristics of the video as an instrument, and its digital audio-visual arborescence that I think is worth talking about, is its indisputable capacity to transform the sensorial space that surrounds us into the object of research that characterises it. At the same time it manages to do so as a hybrid medium, capable of having different expressive methods within itself and being able to take on a predominant role in contemporary aesthetics… as well as in growing electronic mass culture.

This is true in the more classical and narrative examples of what is universally recognised as video art, as well as in its more graphical derivations, glitches, synchronies and minimalisms. Video art is therefore a synthesis, a contamination, a renovation, capable of going beyond the classic expressive methods, a mirror of expression of distorted sensation of our time, an instrument used to knock down distinctions and boundaries, expressive methods and categorisations, for a unique flow of images and sounds, techniques and practices.

The Visual Music fair, takes its origin from this seed of thought, presenting itself as a complex and long path toward fruition of that process of analysis, spontaneous and unstoppable, that has characterised video and audio-visual research in most recent years.

The main subject in the video Au quart de tour from the Belgian artist Antonin De Bemels is the body, and more particularly the dancing body or rather its spatial and temporal recomposition, obtained through various editing and processing methods. Red Flag by Dutch artist Bas Van Koolwijk is an abstract video, produced with software applications that were developed for the live performance FDBCK/AV. The ‘flagging’ seen in this video is of a digital nature entirely, but its logic is based on analogue video processing.The same logic applies to the computations by which FDBCK/AV creates a feedback control circuit between audio and video signals.

From the US collective project Reline 2, the artists included in Visual Music investigate modern mythology, examine environments, play with similes between machine and body, and explode form. Through the use of custom software, unique processing methods, and envelope- pushing applications of traditional production tools, these works push technical limits and the very boundaries of style and imagination.

Audiovisual works like Data Flow by English collective DFuse in collaboration with the musician Luisin ucl, or Drowdown by video artist Phoenix Perry and musician Brian Jackson, or even E3 by Roberto Seidel and From brown to green by Scott Pagano and Twerk, offer an insight into the current world and it’s potential future as imagined through graphic re-interpretations, biotechnology, architecture, and the environment.

More narrative and cinematographic are the works by the Dutch artist Jan Van Neuen – Warning, petroleum pipeline – and Strategie, signe et geste by the French videomaker and musician Pierre-Yves Cruaud. In the first one, a desolate desert landscape is slowly transforming into a futuristic industrialized world. Indefinable machines are branching off into more complex mechanisms which are producing an industrial soundtrack while moving rhythmically. In the second one, a softly buzzing black field is interrupted by a light signal and a penetrating sound. In flashes at irregular intervals, we keep on catching a glimpse of an image. Each time a little more becomes visible, of what looks like a hand, a repeated movement, a gesture. Any fluent perception or clear meaning is made impossible for several minutes, but eventually things come together in a gesture: the shaking of two hands.

More synesthetic and pioneristic the final works from masters like the German artist Karl Kliem and the English duo Semiconductor. In Trioon 1 by Karl Kliem both elements of the music (by Alva Noto and Ryuichi Sakamoto), an analog piano and a digital sinus wave, are represented by two overlapping visual elements: the fading sound of the piano by three abstracted octaves of a keyboard with the keys fading out just as softly as the tones fade from hearing; in the beautiful Fbas Furniture, the music is a processed version of an Eric Satie piano piece that Kliem did with Max-MSP. As Satie was referring his music to be like audible furniture, Kliem thought he would do a video that worked as visual furniture. Has something of a modern campfire in black and white.

Inaudible Cities – Part 1 by Semiconductor is the the first in a series of short films where cities are made up of and controlled by sound. In this episode, every detail of an urban landscape is built by the sonic pressures of an oncoming electrical storm. The very fabric of this isolated world is defined by the noises and frequencies that surround a space in another aural dimension; for 200 Nanowebbers, the artists have created a molecular web that is generated by Double Adaptor’s live soundtrack. Using custom-made scripting, the melodies and rhythms spawn a nano scale environment that shifts and contorts to the audio resonance. As the landscape flickers into existence by the light of trapped electron particles, substructures begin to take shape and resemble crystalline substances.