The exhibit wanted to document and reinterpret one of otolab’s most famous live performance works, conceived in 2006 for the Mixed Media festival which took place in the Hangar Bicocca in Milano. It was presented with a video installation of the work, a tryptich and seven photographic prints taken from the original video material, one object (Pepposcopio) and a Dvd printed in 5 copies. A catalogue was printed and curated by Marco Mancuso with also texts of Claudia Attimonelli.

op7 was a site-specific commission by Marco Mancuso/Digicult within the curatorial work for Mixed Media festival, with the aim of inviting the Milan-based collective to dialogue with the I sette palazzi celesti (The seven heavenly palaces) of Belgian artist Anselm Kiefer, seven post-industrial towers that are permanently located in the Hangar Bicocca in Milano. 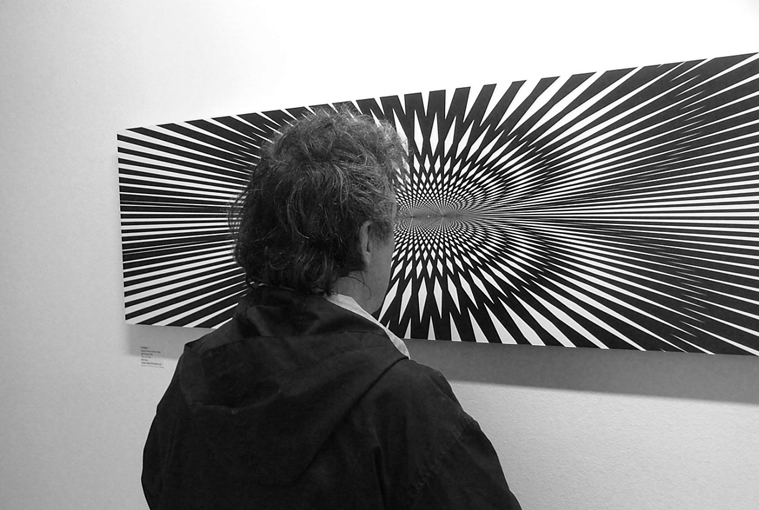 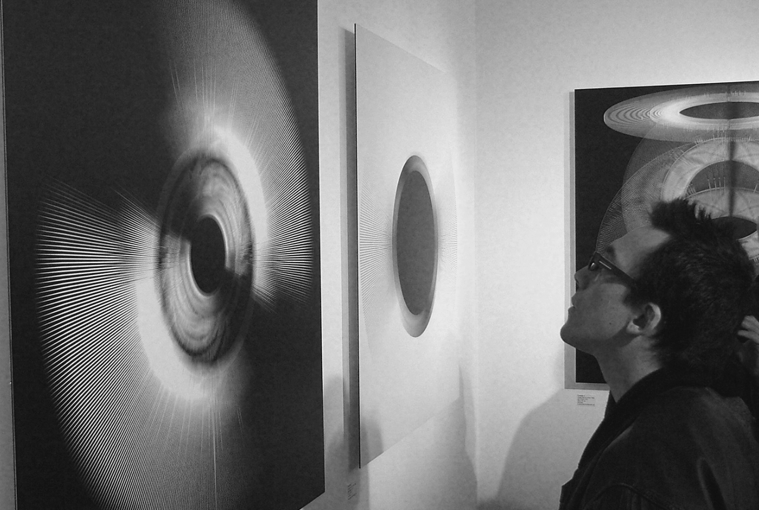 Thanks to a five-screen projection, Otolab set up an optical path through seven tunnels of minimal black and white. The sounds generate bidimensional shapes organized around a horizon, the only fulcrum in the emptiness, an axis around which op7 plays with the spectator’s eyes, deceiving the retina while generating illusory three-dimensional environments born off an inlay of flat geometry.

Each of the seven tunnels is introduced by a moment of sensorial suspension that invites the spectator to abandon the former and prepare for the next voyage: six peripherical zones characterized by pulviscular sounds and pictorial visions created by the Pepposcope, an analog/optical tool projected by the collective and here exhibited: thanks to its rhythmic nature (above 25 fps) it is used in the live to create flashes, perceptive suspensions in waiting for the approaching tunnel.

Otolab was born in 2001 as an identity grouping musicians, djs, vjs, videoartists, videomakers, web designers, graphic designers and architects who share the will to research the interweavings between sound and image. Through a laboratorial practice focused on the sharing of experience and knowledge, otolab has produced collective and individual projects that range from livemedia performances to installations, from experimental electronic music to techno, thus featuring different approaches to experiment hybrid perceptions of synthetic sounds and visions.

Otolab’s exhibit at Traffic Gallery was born with the intention of extrapolating both conceptual and easthetic nucleuses from op7’s original material, with which to document and reinterpret the live performance’s concept. This lead to the creation of a dvd, five digital prints and an audiovisual installation.

The dvd, printed in five copies, is presented on a single-screen projection that reproduces the live’s 50-minute audiovisual immersion, besides a wall installation of the packaging conceived by otolab for the exhibit. The five digital prints on aluminium have been directly extrapolated from the original source files used in the live performance.

These graphic compositions translate the visual space of the live, on a materic surface. The prints are samples, key nucleuses documenting the closure of the creative process.

Op7 is, in fact, a work that was inspired by the illusion of movement in optical graphic design, re-elaborating it through electronic video and sound, then returning to the graphic matrix at the root of the audiovisual material, isolating and fixing it on the digital print. 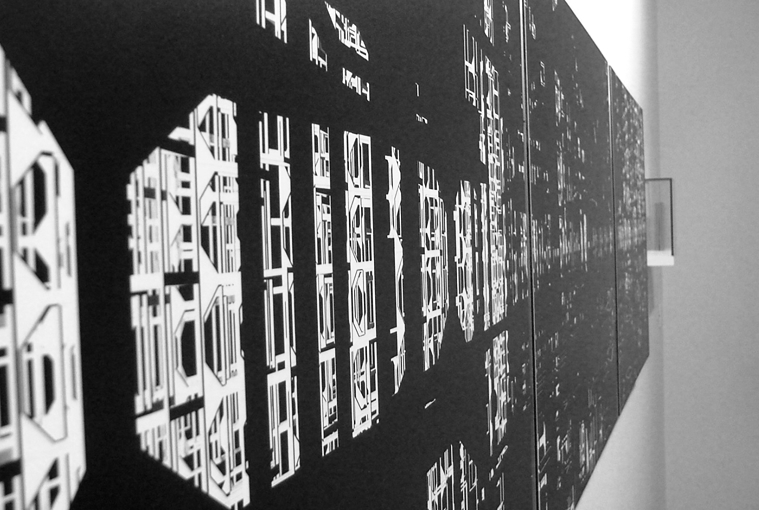 The first three subjects, printed on a square format of 100x100cm, reproduce the introductory phases of the live, represented by the passageways between one tunnel and the next (Tunnel 01, Tunnel 08, Tunnel 04).

The first two, mirroring one another, visualize the circular geometric shapes of the first and last gate, the beginning and the end of the trip. Tunnel 06, a tripthyc composed of three modules (80x60cm) put side by side, reproduces the format and the space of projection of a 3-screen live performance. The last subject is taken from Tunnel 05 whose format (150×38 cm) also follows the proportions of a three-screen frame.