Samson Young – The highway is like a lion’s mouth

Samson Young’s 2018 solo exhibition at Edouard Malingue Gallery (Shanghai) entitled The highway is like a lion’s mouth follows from the English translation of a slogan that is familiar to Hong Kongers. Originating in a 1990s government-sponsored jingle, it educated children about the dangers of jaywalking. Young’s academic background in music has led him to incorporate elements of experimental music, sound studies and site-specific performance into his distinctive contemporary art practice. His oeuvre employs sound as a thinking tool, cutting through the veil of the everyday and of common sense, to uncover its political propositions.

In “Noise: A Political Economy of Music” (1977), Jacques Attali pointed out that music is a mirror of society: “Music is a herald, for change is inscribed in noise faster than it transforms society.” Ever since the notion of car culture and car living was promoted to great fanfare at the 1933 World’s Expo in Chicago, a new mode of living emerged alongside new social systems and behavioural norms.

In this exhibition the artist revisits the dawn of the automobile age, exploring motor vehicle’s dual nature as a symbol of optimism and a source of anxiety as road safety increasingly became a public concern. At the core of this exhibition is an animated music video titled The highway is like a lion’s mouth.

The animation is the artist’s take on a road safety educational jingle, a genre of music that has evolved independently in many parts of the world, which serves as a prime example of how governments use mass media and advertising campaigns to regulate existing social norms or instigate new ones. The highway is like a lion’s mouth is the first part of a trilogy of animated music videos, the entirety of which will be presented in a solo exhibition in 2019 at the SMART Museum in Chicago. 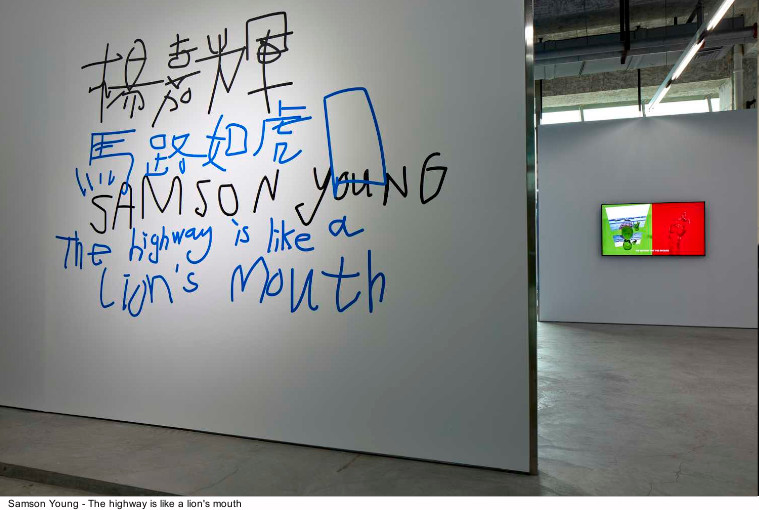 My car makes noises and Solid are two series of new sound drawings by the artist. My car makes noises are visual representations of the sounds of malfunctioning automobiles. For those with driving experience, such sounds contain a great deal of information with minute differences allowing one to detect the state of the vehicle so that preemptive measures may be taken to avoid terrible accidents.

Solid are graphical transcriptions of the sound of Porsche and Mercedes-Benz doors slamming shut. In the common lexicon of car ‘talk’, European cars have a reputation for being strong and solid. The truth of the matter is that luxury carmakers invest considerable resources into engineering a bass-heavy, full-bodied, door-shutting sound. Through the act of transcription in Solid, it is as though the artist is wondering whether these luxury cars can convey through sound a sense of reliability and safety.

The exhibition rounds off with a theme park bumper car in the shape of a gigantic 3D-printed shoe. As the “shoe” makes its way, in snail-like speed, across the gallery floor, its movement is accompanied by the theme song from the classic BBC radio programme Music While You Work. The post-war program piped popular light music into offices and factories across the nation with the aim of relieving the tedium of labour and raising workers’ productivity. The “shoe” also references the “boot” piece in Monopoly. In the classic board game the boot was a long-standing symbol of the working class before it was removed from the game in 2017 along with the thimble and wheelbarrow. 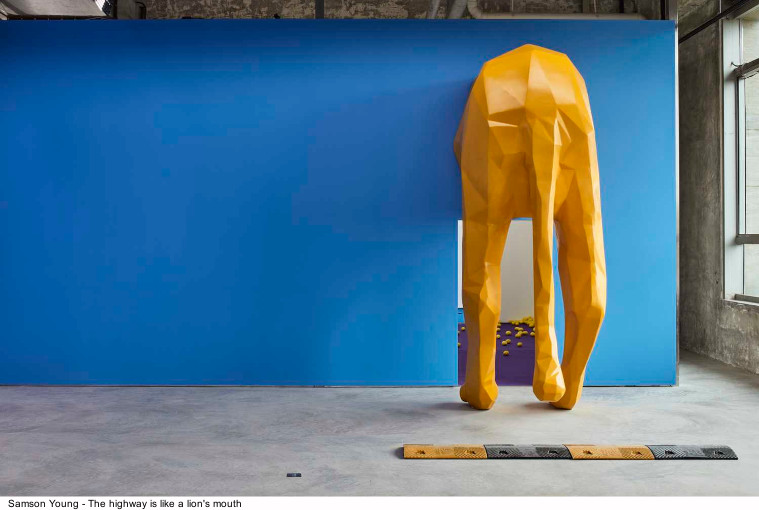 By rethinking what is now an accepted condition of living, and by magnifying the sound and music that such conditions generate, the artist ultimately seeks to examine how we as a society adapt and conform in the face of rapid progress.