“Resonance”: on the phenomena and experience of resonance in nature

Many traditional cosmologies as well as modern science, have stipulated that everything in the universe, from the smallest subatomic particle to the largest star, vibrates with a rhythmic motion which holds them in form. Frequency and resonance order the natural world, in constant movement towards harmony, balance, chaos and polarity, perpetually in change.

This exhibition brings together four artists who have been working with sound, acoustics and architecture for many years and found a common subject in the exploration of resonance. In Resonance four artists formulate a unique concept in which each of their work interlinks and resonates with not only the environment of het Glazen Huis and its surroundings but also with each other to focus on the phenomena and experience of resonance in nature.

Each work addresses different notions and experiences of resonance, using different physical and conceptual means. Through shifting configurations the works interact with one another, creating a dynamic resonant space of sounds and ideas, constantly in change. 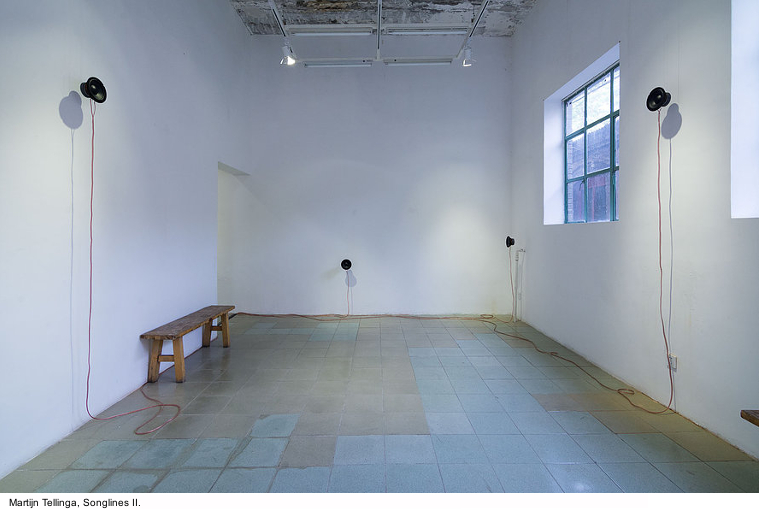 Martijn Tellinga is an artist, composer and occasional performer. His recent installation works explore the idea that within a landscape, sense of place and surrounding comes about through both experiencing and creating resonance. The starting point for these pieces is a partly poetic, partly scientific reading of the acoustic resonances of a given space, in order to make those resonances palpable as an extension of architecture and traversable as a musical and experiential plane.

Songlines are part of Australian aborigine cultures; invisible pathways crossing all over the continent, used to navigate distances of sometimes hundreds of kilometers by means of song. While moving, songs sung in certain rhythmic sequence describe locations of (former) landmarks and (super) natural phenomena, providing bearing to the singing traveler.

For Songlines II at het Glazen Huis, Tellinga will install a number of speaker pairs, that project a constantly changing intervals of pure tones, slowly scanning the resonant spectrum of the room. Recordings of a quietly singing voice occasionally tune with the tones. The two sources combined cause a variety of melodic ripples to occur at specific points within the space; the voice, because of its rich timbre, instantly sings body and location into the static surrounding pure tones. 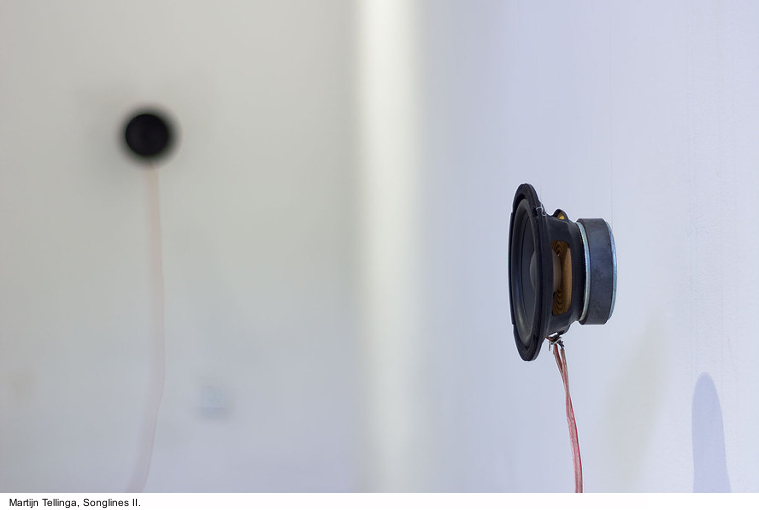 Since 2010 Sagi Groner has been training and investigating the healing traditions and effects of Shamanic drumming as well as building drums himself.  His investigations started in Mongolia and China and later took him to north and south America, in a comparative exploration of this knowledge.

Skin Vibrations consist of a large amount of traditional hand-drums (used for Shamanic healing) which were hand made by the artist. Inspired and following traditional shamanic teachings, and the artists own explorations into the healing effects of ritual drumming and the effects of their complex overtones, he constructs an experimental resonance healing space.

When a drum is played in a space, its waves enter a resonance feedback with the space and the objects within it. If such an object is another drum then the two drums enter a joint resonance which oscillates, and the drums begin to resonate with each other. In the space, utilising a drumming computer, a series of vibrational situations are created that can be experienced and interacted with. 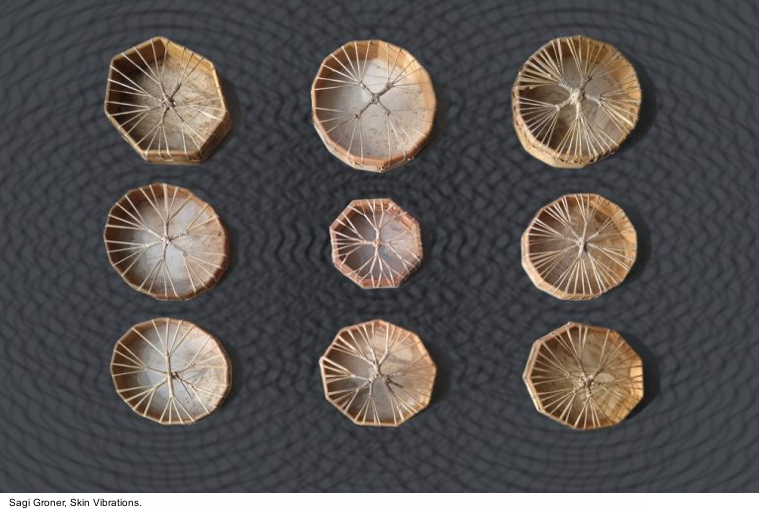 Adi Hollander’s work deals with the intimate experience of sound as it resonates in the body. Her work is driven by her own condition of becoming deaf and longing and exploring other aspects of sound which is felt but not heard. My City is Silence is a sound installation based on research about the materiality of sound, conducted by Adi Hollander at the REACH school for deaf, and autistic children in Kolkata, India.

Together with the children, she investigated the senses of hearing and listening, and the use of the body as the main transmitter that allows a huge diversity of listening and hearing experiences. For her installation, Hollander has created a soundtrack made of distilled and cleaned recordings of city and nature that she originally used when working with the children at the school for the deaf.

The soundtrack includes a voice-over text she wrote about her observations and questions concerning the possibilities of the brain to remember and archive vibrations in the same way a hearing person remembers and archives sounds. The spectator is invited to use an inflatable toy with a tactile speaker to physically experience the soundtrack and the installation will include a collection of drawings made by the children between 2016 and 2018. This work is part of a larger project, KARADA, that Hollander has been developing since 2016. 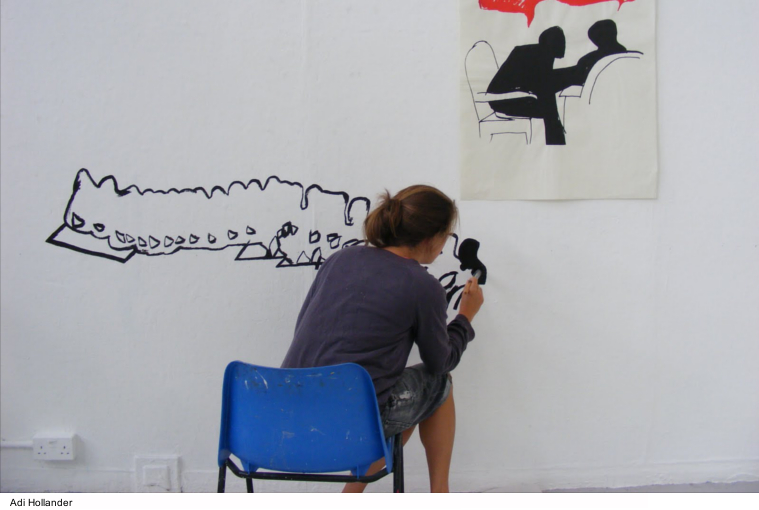 The work of Mark Bain approaches resonance by its interaction with architecture, the body and the environment. It addresses the mechanical side of resonance by making the building to oscillate close to its own natural frequency and come to life as an acoustic humming being.

Transparant Structures works directly with the inherent resonance of the building, and by triggering it mechanically brings it to a level where it is felt, more than heard, in the body. Utilising eight of the windows in het Glazen Huis, this piece transforms the building into a giant loudspeaker using a system of transducers attached directly to the glass surface.

These activators are in tune with the resonant frequency of the structure and vibrated in sympathy with the program material presented to it. Two microphones are placed outside on top of the roof to capture the ambient soundscape of the park surrounding the pavilion. 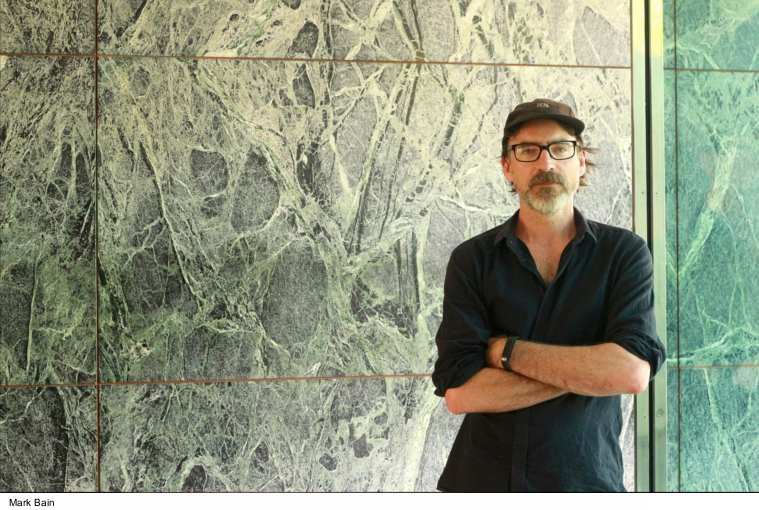