The exhibition presents a new site-specific commission by Fondazione Modena Arti Visive connected to the most recent project by the Korean artist. Jeong has distinguished herself in the international field of the performing arts for her amusing and sinister choreographies in which she performs with domestic electrical appliances and life-size surrogate bodies. 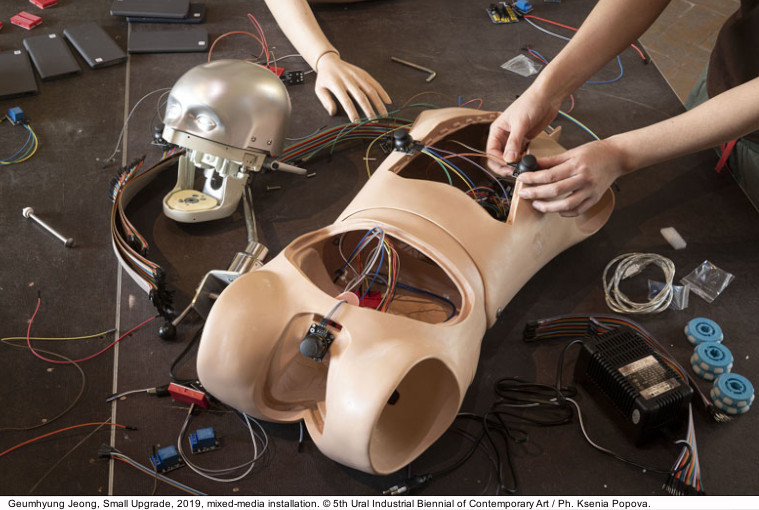 Mixing a variety of media – dance, theatre, filmmaking and sculpture – her works deploy a range of prosthetic devices, mechanical and tech hardware tools, cosmetics, medical dummies and spare body parts, often involving live performances in which she “demonstrates” how her objects can be used. When presented in visual arts contexts, she sets out the objects in bizarre sequences, orderly arranged on pedestals situated in intense white light settings that mock scientific archives and museum collections.

Born in 1980 in Seoul, where she lives and works, Jeong studied Acting at Hoseo University in Asan (South Korea), Dance and Performance at the Korean National University of Arts and Film Animation at the Korean Academy of Film Arts (both in Seoul). Since the beginning of her career, Jeong’s work has investigated the relationship between the human body and inanimate everyday objects, by way of productions that combine languages and techniques derived from the fields of contemporary dance, puppet theatre and the visual arts.

Her practice adopts ordinary movement and strips the specific codes of art and theatre conventions down to the bare minimum. In the course of the physical interaction between her body and the objects, it becomes increasingly ambiguous who controls whom. What becomes obvious, instead, is the artist’s exploration of the relentless entanglement of our living body with the contemporary techno-sphere, that is, the dominant mode in which we experience present everyday life. By problematising the false assumption that we can control reality, her works address how, instead, it is the ungraspable and changing shades of technological development that shape our perception, condition our choices, and make us experience time and space. 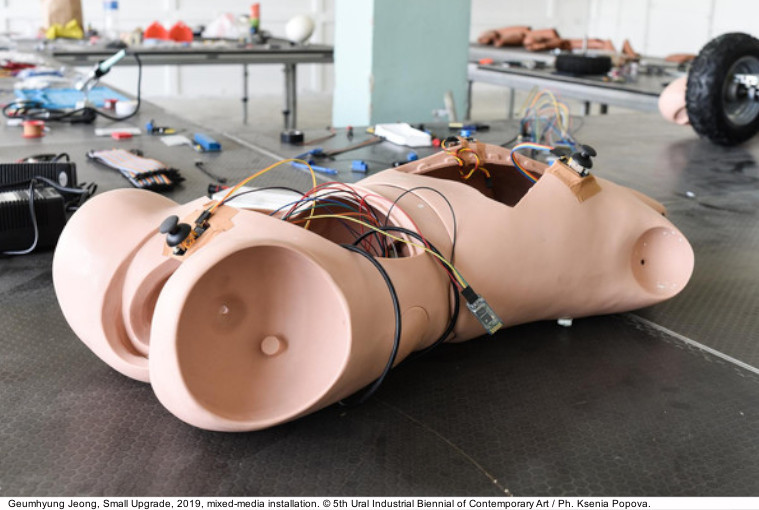 Upgrade in Progress is the further development of Homemade RC Toy, a series of remote-controlled mechanical sculptures conceived in 2019 for her exhibition at Kunsthalle Basel, and Small Upgrade presented the same year at the 5th Ural Industrial Biennial of Contemporary Art (Russia). Jeong’s “robots” are disarmingly amateurish, due to their DIY construction with components outsourced from specialist websites. Indeed, because the artist is self-taught in the principles of software programming and mechanics, the robots act in an unpredictable, clumsy manner owing to the limited range of motion that she has alchemically imbued into them.

As the exhibition title suggests, the new breed of sculptural machines realised for Upgrade in Progress are a continuation of the allegorical narrative established with Homemade RC Toy. These remote-controlled mechanical robots have been built with similar visual and structural features to the previous “models” but possess a wider range of movements imposed by a design that, while gaining in flexibility, also controls the uncanny and inane appearance of the specific body parts. The sculptures are placed over modular worktables that transform the Palazzina’s halls into a total stage setting. This specific spatial layout, broken up by videos along the whole exhibition route, is not just a representation of the artist’s workplace, but it will actually be used by Geumhyung Jeong during her period of residence in the city as a studio-workshop where she will perform tests and experiments on her “toys.”