Innovation in and for Europe: STARTS 2020 prize winners

S+T+ARTS=STARTS – Innovation at the Nexus of Science, Technology, and the ARTS: STARTS is an initiative of the European Commission to foster alliances of technology and artistic practice that effectively implement European policymaking to nurture innovation and that benefit the art world as well. The focus is on people and projects that contribute to mastering the social, ecological and economic challenges this continent faces.

One element of this STARTS Initiative is a prestigious award generously endowed with €40,000 in prize money. A yearly competition is held to single out for recognition innovative projects at the nexus of science, technology and the arts that have what it takes to make a significant impact on economic and social innovation. The two STARTS prize winners each receive €20,000 and are prominently featured at Ars Electronica, BOZAR and Waag.

Design by Decay, Decay by Design is a series of artifacts that exhibit designed decay. They were done for the 2019 Ginkgo Bioworks Creative Residency on how to design a world without waste. As an architect and artist, I recognize that most of what I create goes to landfill. If that is the case, let me design waste that I can live with, garbage that retains some desirability as it degrades in sight and on site. Let me design waste as nature designs it, not only as the product of breakdown and destruction but also as input for renewal and construction. In biology, one system’s entropy is another system’s organization. With the assistance of Ginkgo, my goal was to organize decay, using enzymes, fungus, bacteria, and other biological agents as ways of decomposing and composing biological matter at the same time. By mediating decay through species selection, control of environmental conditions, and nutrient templating, I am actively pursuing mutability as a desired quality in the physical world as well as guarantee that the mechanisms of constructive renewal will be embedded into that world. 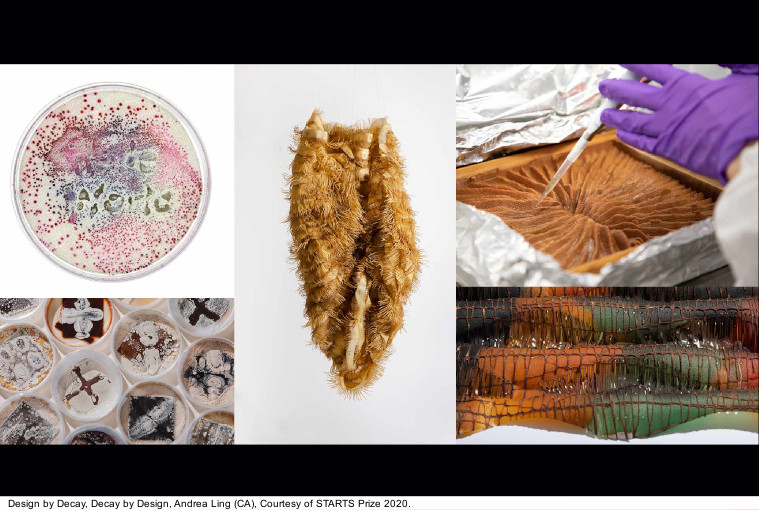 My base material system included biocomposites of chitin, cellulose, and pectin, derived from the exoskeletons of shrimp, tree pulp waste, and fruit skins. These materials can be combined in different ratios to form different bioplastics with a wide range of mechanical and physical characteristics and are environmentally responsive and easily degradable. The work was organized into 3 projects, done in Gingko’s wetlabs with its scientists:

1. Using enzymes derived from fungus and human saliva and integrating them into biocomposites with spatial and temporal control to transform the material rather than only destroy it. This was degradation as a fabrication process.
2. Using different strains of Streptomyces bacteria to colonize cellulose and different bioplastics in order to transform them. Streptomyces are common soil bacteria and secondary decomposers that produce vibrant pigments and geosmin, the compound responsible for soil smell.
3. Using different types of fungi, Aspergillus niger (black mold) and Trichoderma viride (green mold) in co-cultures to transform and selectively degrade different materials. Mold is a much more powerful and resilient decay agent and would rapidly colonize any substrate we provided.

The challenge of working with biological materials and agents is that they are environmentally responsive and have agency, and the resulting artifacts are not always predictable or standardized. Contamination was common, as was loss of viability. As a classically trained architect, I am used to having precise control over my output, and the struggle in a design practice such as this is to learn how to accept the embedded tensions where material and biological agency sometimes work in contradiction to what I have planned or what I am comfortable with. It is a struggle for industry to accept this inconvenience as well. However, if we accept this inconvenience, using decay to facilitate renewal offers extraordinary advantages, such as access to circular systems and the ability to grow, adapt, and reproduce out of literal rotting, providing a resilience not found in industrial systems.

Given our state of climate crisis, we can no longer design primarily for human and economic convenience; our survival depends on changing our priorities and expectations for the material world. My goal in using these material systems and these biological agents is not to create a low carbon footprint project or upcycle waste into new products. Rather it’s to support a different mode of design, one where the process of making and breaking is provisional and not only consumptive. Design by Decay, Decay by Design seeks to redistribute value away from permanent materials that destroy ecosystems onto transient ones that restore them, finding epistemological as well as practical value in designing responsivity, degradation, and renewal into man-made objects.

Bio-art: When a Tree became a Partner
It was the rebirth of the Biscarosse Elm in the frame of Olga Kisseleva’s Biopresence project (2012) that served as a catalyst for the creation of a series of the tree-based bio-art works created by the artist during the last decade. The “arboreal” theme was taken up and developed in several parallel studies. One such extensive project is EDEN Ethics – Durability – Ecology – Nature, which began in 2012 and has continued to the present day. The project touches on a range of issues, including the protection of endangered plant species and interspecific communication between living subjects that are placed in the “inhuman”category. The EDEN project is aimed at creating a new Garden of Eden as the ultimate goal of introducing innovative technologies to art and using unorthodox thinking to solve ecological problems. In collaboration with scholars from various countries, Olga Kisseleva is currently “resurrecting” the following plant species: the West European elm (the Biopresence project, France), the Afarsimon and Methuselah palm tree (the Negev Desert, Israel and Jordan), Sophora toromiro (Easter Island), Bodhi Jiulian (China and India), Wollemi Pine (Australia), and the Aport apple cultivar (Kazakhstan). The study of trees as guardians of biological and historical memory has a special place in Olga Kisseleva’s project. The artist creates in this field the Memory Garden program (2020) based on the bioshere of Babi Yar, one of the most tragic sites of the Holocaust. The memory captured through its trees perceived as time capsules is a message about the future, despite the tragedies of the past. 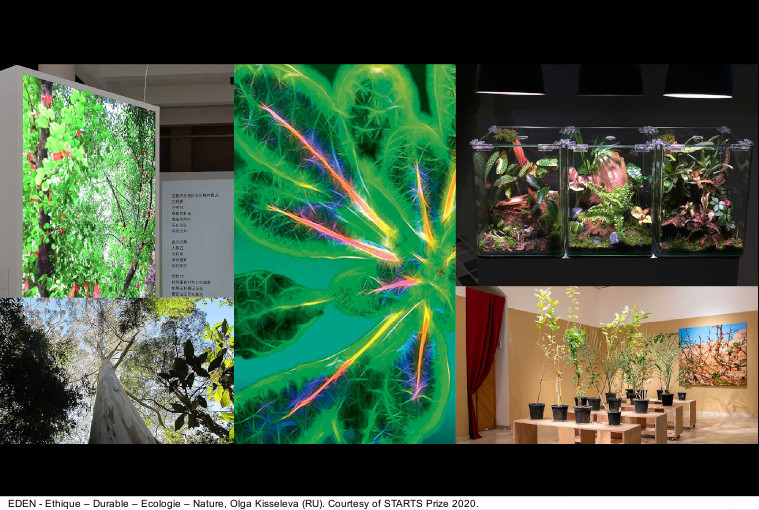 The artist scrutinizes the hypotheses advanced by European scientists, according to which plants can “communicate” among themselves. Olga Kisseleva is also investigating the possibility of “eaves dropping” on this arboreal “dialogue,” and even taking part in it. This idea has given birth to the project in which trees can “communicate” on two levels: among themselves in the T2T (Tree – To – Tree) model, and on the level of the global T2N (Tree – To – Network). The trees included into the project can talk together across continents. Humans can follow their communication through the interactive installations created by the artist.
This network helps trees to optimize their vital mechanisms and to protect themselves from potentials aggressors. The trees included in the project can talk to humans through the Internet and let them know about any danger which can be perceived by vegetation before we know about it. EDEN experimented the first communication between the historical balm of Gilead trees in Israel and the similar trees in Jordan (Listening to Trees Across the Jordan River, the Negev Museum of Modern Art, 2020). Thanks to the T2T system, trees growing in natural conditions (Japanese Cedars) and trees that have a different biological memory (Wollemi Pine) establish contact through their relatives in Japan, and learn the anti-catastrophe scenario from them (Echigo Tsumari Contemporary Art Triennale, 2018).
Datascape is an interactive program that materializes and analyzes the whole communication activity of the organic network based on vegetal medium across the selected geographical area. At the heart of this project is the dynamic database dedicated to regional trees and to the broader ties between vegetal heritage, climate, and society. This database will be the source of all visual displays seen by the public and it will also have an interactive dimension: as the project goes on, the public itself will be able to feed the database thanks to a specific QR code. In other words, the art piece will take the shape of a visual display installation composed of digital objects that it will visually map and connect to one another.
Its goal is reviving extinct species of plants and preventing the extinction of species that have been placed on the IUCN Red and Green lists. The real culmination of the EDEN project is our contribution to landscape restoration. It leads to reflect on the implication of humans in this communication and these processes and how to durably change the behaviors by setting up the realization of a true utopia. One of the directions of bio-art explored by the artist Olga Kisseleva is the possibility to avoid or inverse the natural catastrophe by bringing extinct species back to life, or creating new species on preexisting DNA bases. An artistic utopia, assuming that extinction, despite its supposedly definitive and irreversible nature, can be revoked thanks to the advancement of contemporary human civilization.