This September, FACT (Foundation for Art and Creative Technology) and interactive art experts Invisible Flock, will take over Toxteth Reservoir for a unique “walk through water”. AURORA invites audiences to step inside the cave-like vaults of one of Liverpool’s hidden gems for an epic, immersive experience.

Choosing the decommissioned reservoir as its home, and working with international artists from around the world including Indonesia, India and Japan, AURORA will tell a global story of our relationship to water. The Grade II listed Toxteth Reservoir, built in 1845 and decommissioned in 1997, was one of the first in the world to use cutting edge Victorian engineering to preserve fresh water for Liverpool’s growing population.

For AURORA, this brick fortress – which is half the size of a football pitch – perched at the top of Liverpool’s High Park Street in Toxteth, has been reimagined for the 21st century. Bleeding edge interactive technologies, soundscapes, lasers and ice sculptures captivate the beauty and power of water, set within the cavernous walls and cloisters of this Victorian landmark. 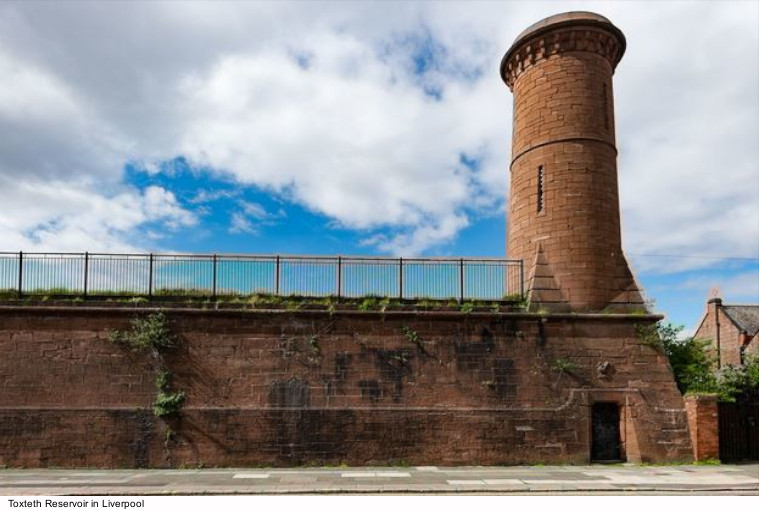 Created by Leeds-based artists Invisible Flock, AURORA is an experience like no other. The sensuous and emotionally evocative materials of water, ice and even the smell of rain will elicit our innate and spiritual connection with water: reminding visitors of its power, and ultimately its magic.

As Invisible Flock Creative Director, Victoria Pratt said: “AURORA is a brand-new, spectacular work of art that attempts to create a discussion about climate change in a way that engages, challenges but also positively engages audiences in questioning and re-evaluating their relationship to the natural world and their effect on it.

AURORA uses cutting edge technology to present water as a substance, a body, a spiritual entity and not simply a utility. In the driest summer on record it could not be a more appropriate time to have this conversation about water, to explore absence but also excess.” 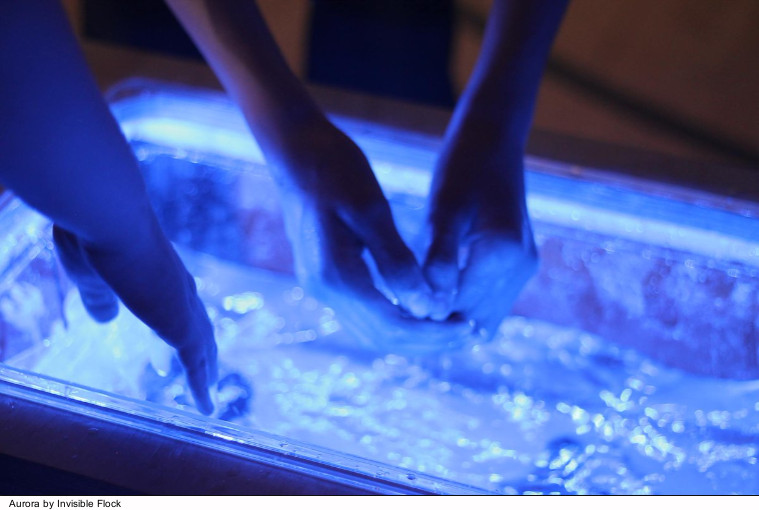 James Hamilton, AURORA composer and collaborating artist, said that: “The sound in the reservoir is like no other place I’ve been in. You expect a cave-like echo, but get a continuous, smooth sound that moves around the space. You can almost trace its path as it floats through the arches of the reservoir, a ghost of its source.” 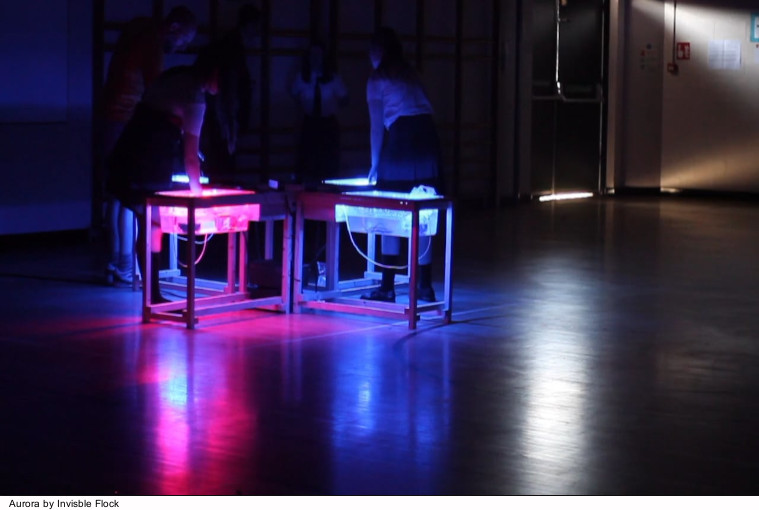 This large-scale art installation is part of Liverpool 2018 – a year-long programme of cultural projects to mark the 10th anniversary of Liverpool being European Capital of Culture. AURORA is co-commissioned by FACT and Invisible Flock in partnership with Liverpool City Council, and Dingle 2000 Regeneration Trust. Supported using public funding by the National Lottery through Arts Council England, and British Council.

Accompanying the work will be an app experience building a portal into the installation to be experienced by participants from anywhere in the world. The app will invite users to explore the Reservoir, to delve deeper into the research behind the project and discover the inner workings of the experience.

A journey through ice caves, glaciers, rainforests and the sea will invite a deeper understanding of the world of the work in an experience that mirrors the installation in both intensity and viscerality. 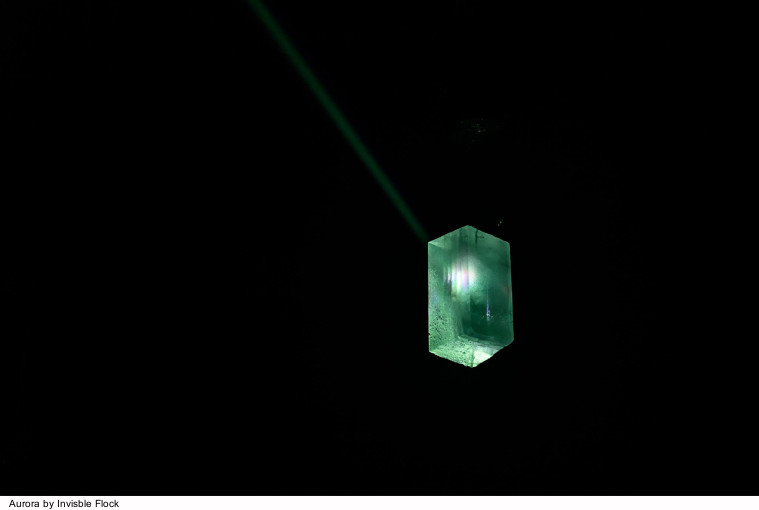 Invisible Flock is Catherine Baxendale, Ben Eaton, Klavs Kurpnieks and Victoria Pratt. This internationally renowned interactive arts studio based in Leeds, creates groundbreaking innovative artworks to be experienced and participated in by thousands all over the world.

Described in the Guardian as “multi-platform makers of rare ambition and invention” Invisible Flock’s technologically driven practice seeks to redefine and disrupt traditional perceptions and models of global art practice. Drawing directly from the world around them their mission is to create and foster relevant and contemporary practices that have a long lasting transformative effect. 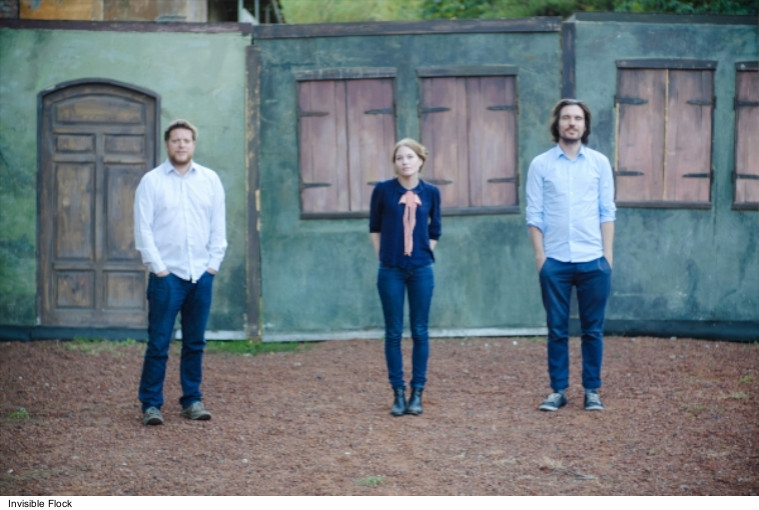 Arts Council England champions, develops and invests in artistic and cultural experiences that enrich people’s lives. It supports a range of activities across the arts, museums and libraries – from theatre to digital art, reading to dance, music to literature, and crafts to collections.

Between 2015 and 2018, we plan to invest £1.1 billion of public money from government and an estimated £700 million from the National Lottery to help create these experiences for as many people as possible across the country.

Since its inception, Dingle 2000 Regeneration Trust has been focused upon the redevelopment of the Dingle. In 2000 It acquired Toxteth reservoir and was able to attract over half million pounds, from a combination of EU Objective 1 funding, DSRB and United Utilities which it used to change an industrial structure into a building ready for development. 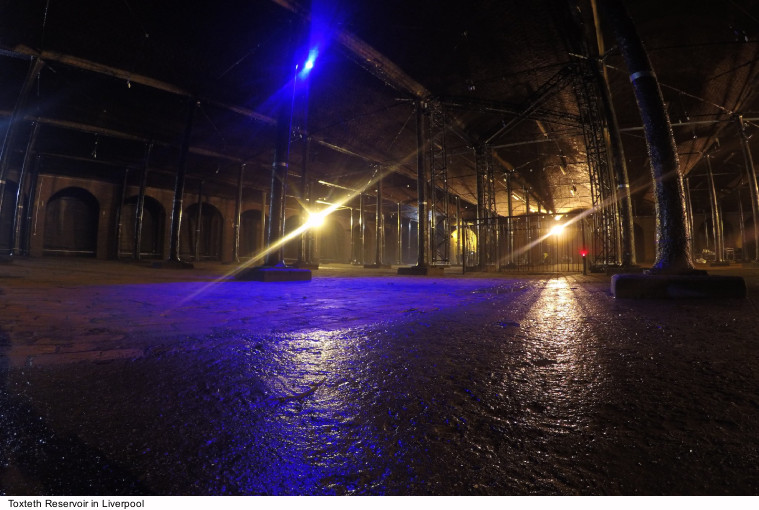 The Reservoir is Grade II Listed; it was built by the Corporation of Liverpool in 1855 to provide a reliable, safe water supply for its rapidly expanding port and population. Closed for water storage in 1997 it was acquired by Dingle 2000 under a 125 year lease.