Cao Fei: the exhibition “Blueprints” and her new installation “The Eternal Wave”

Cao Fei‘s work is underpinned by an ongoing exploration of virtuality, how it has radically altered our perception of self and changed the way we understand reality. This slippage between the physical and the virtual is always present in her work; from the utopic and dystopic potentials of our modern-day cities, the escapism of users via the virtual platform, Second Life, to the alienating effects of mechanised labour in China, Cao Fei often addresses these far-reaching topics through deadpan humour and the creation of surreal encounters. Although each of Cao Fei’s worlds appear to teeter on the edge of apocalyptic uncertainty, her characters navigate these complex and chaotic realities with vigour and agency, harnessing the unique possibilities of technology in order to shape a collective future. 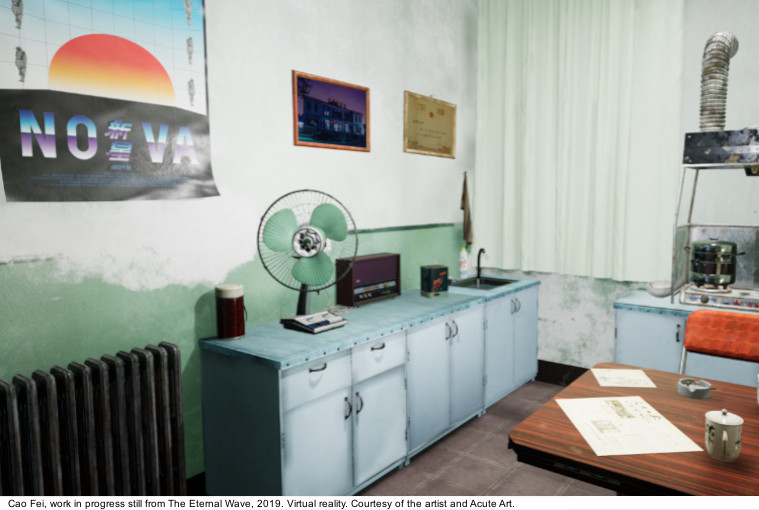 This project at the Serpentine Galleries will be Cao Fei’s first large-scale institutional solo exhibition in the UK, and is the third time that she has participated in the Galleries’ artistic programme: firstly, as part of China Power Station: Part 1, an offsite Serpentine exhibition at Battersea Power Station in 2006, where the artist presented her film, Whose Utopia?, and then in 2008, with the installation of RMB City in the Gallery’s entrance space, where visitors could access a fictional city constructed in the online virtual world of Second Life. Outside the UK, the Serpentine has worked with some of the region’s most exciting practitioners with presentations in China and Hong Kong; group exhibition Hack Space (2016), featuring work by Cao Fei, and the Beijing Pavilion (2018), designed by JIAKUN Architects.

At the centre of this exhibition will be a new Virtual Reality artwork The Eternal Wave, produced in collaboration with Acute Art and premiered as part of Blueprints; a site-specific installation bringing together collected archival material and furniture that is based on elements of Cao Fei’s Beijing studio; and her latest film, Nova. These three interconnected works mark the culmination of Cao Fei’s extensive research in Beijing over the last five years, examining the social history and urban transformation of the city’s Jiuxianqiao (‘Hong Xia’) district where she lives and works. This new body of work will be presented within an installation that brings together a selection of the artist’s previous film works to expand the themes of automation, virtuality and technology, giving visitors an introduction to her wider practice. 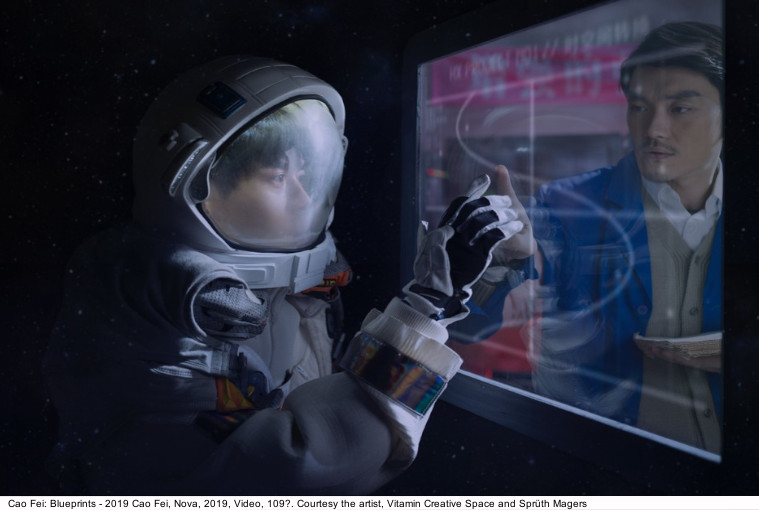 The Eternal Wave, is an ongoing exploration of virtuality, reality and the perception of self in relation to technology. Based on the exact scale and scanned models of the artist’s studio, Cao Fei seeks to re-explore and re-imagine the past, reflecting the changing nature of humanity.

Traversing the boundaries between time and space, The Eternal Wave begins with the viewer in a physical reproduction of the “real” kitchen from the artist’s Beijing studio before being immersed in a virtual version of the same kitchen. A deeply immersive experience, visually and literally, the viewer becomes drawn into the deeper realms of the artist’s creative universe, becoming a participant and player—acting out a role in the artist’s production.