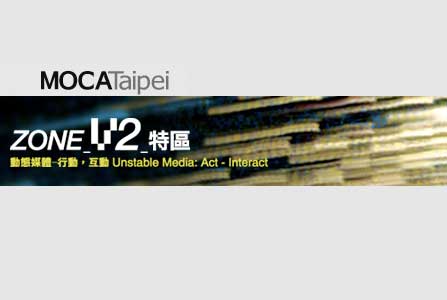 From 7 August through 11 October 2007 the exhibition Zone V2_ will take place in the Museum of Contemporary Art (MOCA) in Taipei, organized by V2_, Institute for the Unstable Media in Rotterdam, the Netherlands.

To celebrate the 25 year anniversary of V2_, the MOCA has invited V2_ to curate an international exhibition of electronic and media art. The exhibition shows a compilation of art and artists, who have determined the identity of V2_ in the past decennia.

Media such as radio, photography, film, television and internet have deeply influenced the way that modern people regard themselves and experienced the world. The exhibition plays with our media experiences, and with the impact the media have on our social, cultural, political, and economical context and interactions. The main themes of Zone V2_ include time, information, and interaction, represented by new installations, as well as artworks that were exhibited earlier during the Dutch Electronic Art Festival. Highlights among the more than twenty artworks on show are George Legrady’s Pockets full of Memories, Beijing Accelerator by Marnix de Nijs en data.tron by Ryoji Ikeda.

Workshop Made in Taiwan