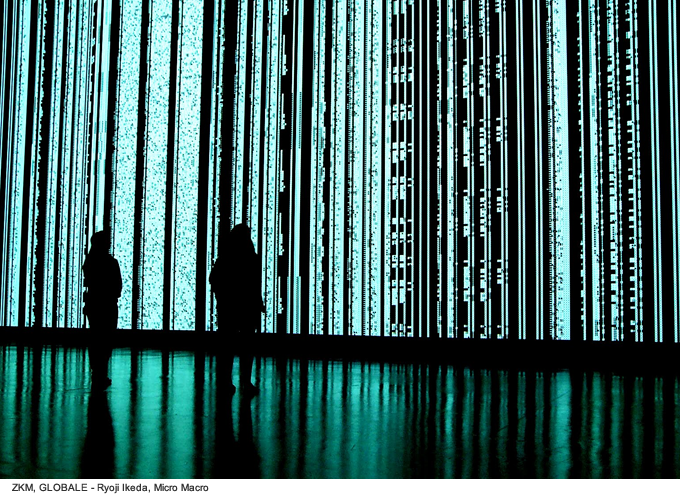 Translated from Italian by Arianna Zandonati

South Germany, Baden-Württemberg region. Already heard of ZKM | Zentrum für Kunst und Medientechnologie? If you are reading this magazine the question might be obvious in 90% of cases, to be pessimistic.

But if you are part of the remaining 10 percent or simply, like me, you’ve never grasped the occasion to visit it… now you have time until next spring to hop on the first available, bus/train/plane heading Karlsruhe, thus being able to visit the halls of what is now one of the world’s major establishments for the promotion and research on digital art and new technologies. Still not convinced?

You can’t miss GLOBALE – The New Art Event in the Digital Age: the new major curatorial project hosted within ZKM’s exhibition spaces, presenting an impressive and varied program lasting 300 days until April 2016. A unique event of its kind, as for size and offer: exhibitions, concerts, performances, lectures and symposia aim to present the twenty-first century trends from a multiple, artistic, sociological and cultural point of view. 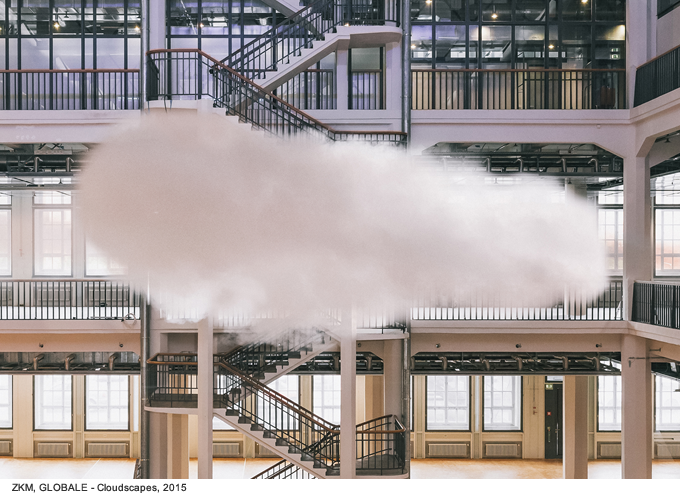 The goal, stated by the organizers is to offer a rich and comprehensive picture of the new Renaissance 2.0, in which the concept of Anthropocene (The new anthropology epoch that sees men as change agents worldwide) is supported by the various artistic works showing, through multiple languages, how natural sciences, technology and politics not only provide more tools for interpreting the world, but also ways to actually change the planet itself.

Art’s “scientification”, technological development, different media involved in the creation and use of art works: such aspects have always been key to ZKM in the continuous process of building a new digital consciousness in art as well as society. A long term commitment to allow increasingly more different realms can communicate and interact with each other, starting from the artists themselves, as well as the representatives of other fields involved, from computer science, engineering (to name just a few).

GLOBALE is resolved to account for all this, without forgetting another key issue of contemporary society, namely globalization. Global action, or action for change. A connecting action that has been bringing about, for over two decades now, never-ending flows of people, goods, data and information across the globe, thus becoming a significant benchmark in the creative realm too. It has generated and introduced another interesting concept that Global endorses and fully promotes through a thematic exhibition: “Infosfera”. 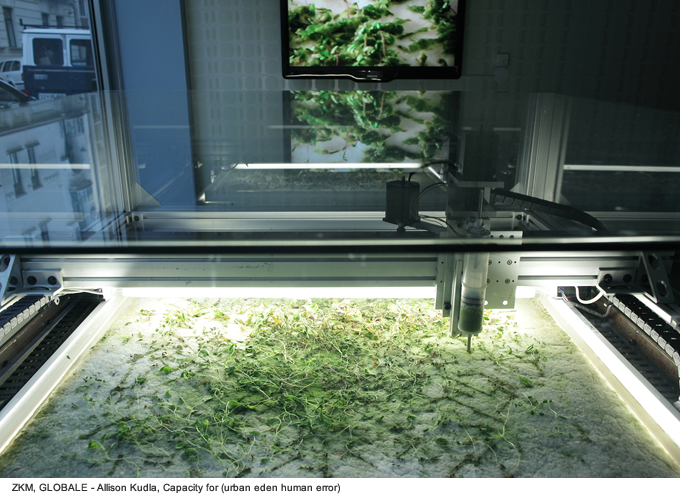 Drawing on the concept of global interconnection, paraphrasing the concept of atmosphere as an essential element for human survival on Earth, Infosfera then becomes necessary for the co-habitation of 7 billion people not just as living beings, but as social beings. A network of electromagnetic waves spanning the globe; a sort of data exchange global sheath and establishment of goods through the communication of data. All this is not the future but our present, and ZKM, once again, intends be its worthy spokesman.

If like me, you usually miss opening events and you become aware of an unmissable event right at the last minute, you do not have to worry this time: in the next few months you will be able to attend several great events within the GLOBALE programme. However, I believe you’d better hurry right now not to miss the work of the artist and Japanese composer Ryoji Ikeda.

Presented as a prelude to Infosphere exhibition, the multifaceted work of Ikeda is titled Micro / Macro and it entails two impressive installation projects: Supersymmetry and The planck universe, the latter directly commissioned by ZKM, this being its world premiere. Both are the result of Ikeda’s long stay at the CERN in Geneva, in 2014. During that time the Japanese artist, who has always explored various expressive possibilities through the lens of an aesthetic vision that would normally be confined within the walls of a laboratory, has had the opportunity to follow the researches carried out by scientists on elementary particles. Such opportunity is not usually extended to everyone, which allowed Ikeda to actively participate in experiments and ongoing developments on the reformulation of the so-called Standard Model. 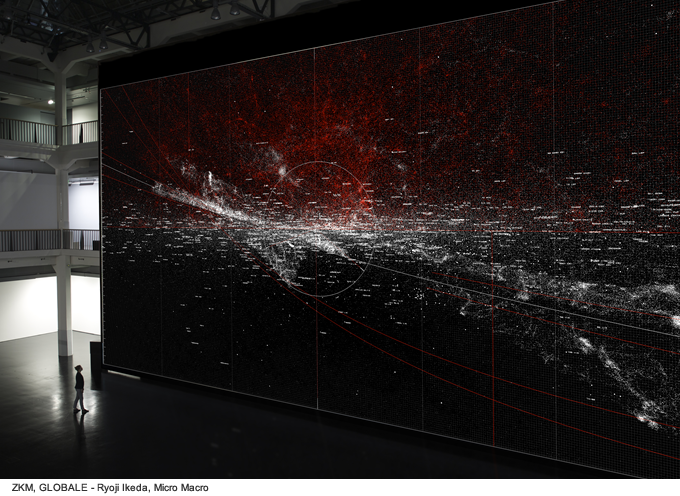 Now, I am not an expert of the subject – nor ever studied similar subjects – which is why I am not going to speak about bosons and fermions, or what we mean when we are told that these installations are inspired by the superparticles theory (I suggest you take a look to the Wikipedia page).

However, highlighting its artistic scope and the opportunity, as audience, to feel part of a universe as much familiar as it is unknown will be just enough; plunging into paintings depicting what is unknown to most people. With the new work The plank universe the visitor is displayed two projections covering an area of ​​over 375 m2: a double installation, one horizontal and one vertical, through which the human perception is compared with different sizes, from the microscopic to the space beyond the universe.

Worlds invisible to the eye are thus extended through the Plank scale (10-35 metres) thanks to a large-format ground projection and the plank universe – micro, on which visitors are invited to walk, experiencing an unique sensory interaction. At the same time, in the second room, the plank universe – macro is projected on an immense wall, taller than three floors, through a macroscale of 1026 m. The observer is totally captured by the vastness and power of the playback images as he is enveloped by the connected sound. The consequential feeling of sublime is brought about, not secondarily, by the subject of the images; visitors are actually faced with what Ikeda, following his stay at CERN alongside researchers, sees as the universe that extends beyond the humanly reachable – and we are talking about distances of 13.8 billion light years. A space that no one will ever be able to see, a space unknown which, according to the theory of universe expansion, will become increasingly more distant.

Supersymmetry consists of 80 screens placed in such a way as to form a sort of long corridor in which visitors are surrounded by digital images. Placed as ”central axis” between the two The plank universe installations, it draws inspiration from the research processes developed at CERN, where scientists are currently working to demonstrate the truth of the theory of supersymmetry.

To our eyes, mathematical visions and physical formulas appear as mesmerizing flash lights, synchronized to the sound giving rhythm to the incessant flow. Unaware of physical formulas and mathematical data that flow along the parallel rows of monitors, we can only surrender to this digital path, to feed on the unique suggestions that derive from it.