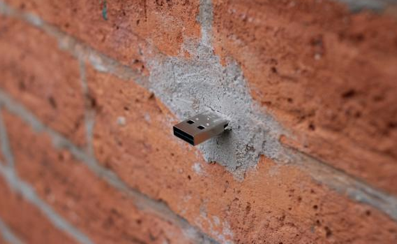 ZERO1: The Art & Technology Network is pleased to announce schedule highlights for the 2012 ZERO1 Biennial, one of the world’s only Biennials to focus on the convergence of contemporary art and technology, taking place in Silicon Valley, around the Bay Area, and beyond this September 12 to December 8.

Inviting more than 150 artists from over 13 countries, the 2012 ZERO1 Biennial will present works at the forefront of media art – collaborating with local, regional, national and international cultural institutions and iconic Silicon Valley companies to showcase three months of exhibitions, events, and performances – in museums and galleries, in skywriting above San Francisco, in the streets and storefronts of Silicon Valley, on iPads and smartphones, and across the World Wide Web.

The 2012 ZERO1 Biennial theme and the core Biennial exhibition, Seeking Silicon Valley, was inspired by Silicon Valley’s globally renowned reputation as the hub of high-tech entrepreneurial innovation and networked creativity, as much as from the region’s conspicuous lack of publicly accessible features including borders, a defining architecture, a singular culture, and a cohesive sense of place. Biennial artists and the Biennial’s partnering organizations have been charged with articulating the 2012 theme Seeking Silicon Valley in all of the showcased performances, exhibitions, events and panels. 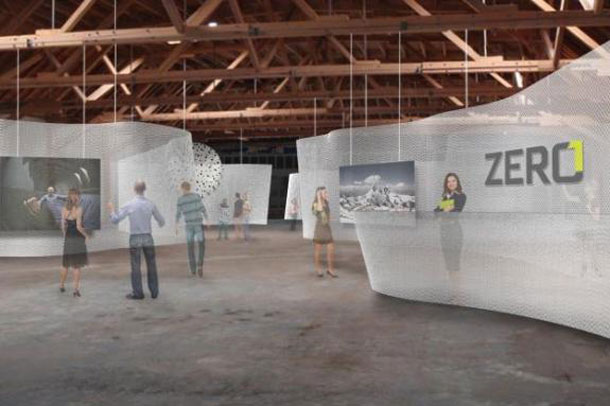 For three months throughout the Bay Area the Biennial will feature installations, interactive media, sculptures, online works, videos and performances by artists who are utilizing technology to create contemporary art in original and provocative ways. The lineup of Biennial artists for 2012 include such notable art world figures as Lynn Hershman Leeson, whose new cinematic installation Present Tense – examining the human effects of global water toxicity and including high definition videos of babies swimming under water – will debut as part of the Biennial’s main exhibition, Seeking Silicon Valley. Partnering with eBay Inc., Jer Thorp, the New York Times’ lauded Data Artist in Residence, and Columbia professor Mark Hansen have been commissioned to create a data-driven work. The public can view the piece  – which ties excerpts from classic literature to eBay listings and transactions – as it is projected on the Internet giant’s North Campus entrance starting September 12, 2012 when the Biennial launches.

Like all of the artworks in this uniquely collaborative Biennial – a dynamic network of shows and events involving an established and esteemed group of cultural partners, including the San Francisco Museum of Modern Art, Stanford University’s Institute for Creativity and the Arts, New York’s Eyebeam Art & Technology Center, Russia’s Ural Industrial Biennial, and the South Korean biennial Media City Seoul – the eBay Inc. installation was inspired by the 2012 Biennial theme Seeking Silicon Valley.

“Silicon Valley is an idea as much as a place,” says Biennial Lead Curator and ZERO1’s Director of Programs Jaime Austin. “Renowned globally as a hub of entrepreneurship and innovation, Silicon Valley is notoriously difficult to experience. More than a specific location it is a network of freeways, technologies, companies, and relationships connected in a complex physical and virtual web. Modeling this networked nature, the 2012 ZERO1 Biennial is a network of curators from different countries bringing a global perspective to the Biennial exhibition, a network of contemporary artists sharing and presenting work, as well as a network of Biennial partners presenting exhibitions, events and performances connecting Silicon Valley and beyond.” 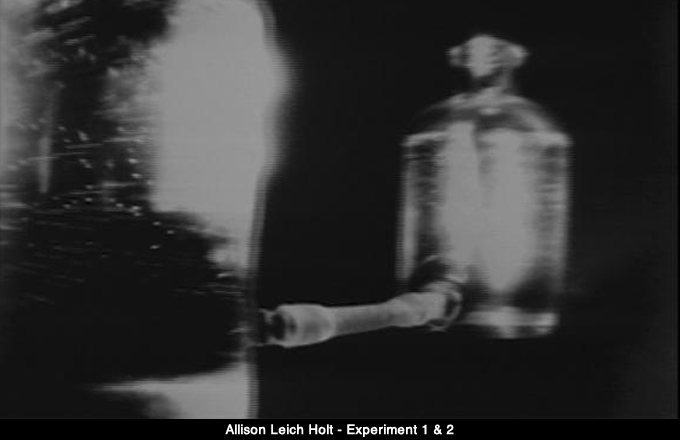 Coinciding with the opening of the 2012 ZERO1 Biennial, the organization is debuting the new 10,000-square-foot bricks and mortar home, dubbed the ZERO1 Garage, a year-round center for cross-disciplinary exploration that honors the garage-workshop roots of such Silicon Valley pioneers as William Hewlett and David Packard. Described as part think-tank, incubator, and artist fellowship program, the Garage’s direct contribution to the 2012 Biennial is to serve as the exhibition space for Seeking Silicon Valley. In addition to serving as the Biennial hub in Silicon Valley, the first two recipients of the Garage Artist Fellowships will be to announced by ZERO1, in partnership with two Silicon Valley tech giants Adobe and Google, during the opening of the Biennial on September 12.

Designed by Christopher Haas, the award-winning San Francisco architect who worked with Herzog & de Meuron on the bold de Young Museum, the Biennial’s Seeking Silicon Valley exhibition space will fill all 10,000 square feet the new ZERO1 Garage. Spearheaded by ZERO1’s lead curator, along with an international team of 4 female co-curators specializing in the visual and media arts, Seeking Silicon Valley will showcase a rich range of work, much of it commissioned for the occasion, by 24 prominent and emerging artists from Belgium, Brazil, China, England, France, Germany, Korea, Netherlands, Switzerland, Taiwan and the United States. Included are:

– Maurice Benayoun, the innovative French artist whose interactive installation, Tunnels Around the Atlantic (1995) connected the Pompidou Centre in Paris and the Museum of Contemporary Art in Montreal, will connect San Jose, Seoul, Paris, New York, Hong Kong, and Montréal with Tunnels Around the World, by inviting participants from around the world to “dig” through archived images from the participating institutions, and communicate with each other through a virtual tunnel.

– Nelly Ben Hayoun, the UK-based French director and experience designer’s music video of the space opera she’s composing with science fiction writer Bruce Sterling – with music performed by an all volunteer orchestra of NASA employees – will engage in a live performance at the opening of the ZERO1 Biennial Urban Screen.

– Shu Lea Cheang, the influential Taiwanese-born artist and filmmaker, who deconstructs recycled keyboards in her interactive installation, Baby Work. Visitors can pick through piles of keys, choose a letter or symbol that appeals to them and plug it into a wired-up metal wall that makes chance communal music.

– Michael Najjar, the adventurous German media artist’s nasdaq_80-09 pictures the dot-com boom and bust as a landscape, using manipulated images he shot on Argentina’s towering Mt. Aconcagua to map the peaks and valleys of the technology-fueled NASDAQ stock exchange.

– Jae Rhim Lee, the Korean-born, M.I.T. and Harvard-trained artist and designer whose commissioned work, Decomp Me, part of her Infinity Burial Project, is an interactive iPad app and a public “intervention” that invites participants to “turn away from death denial,” as the artist puts it, “and to face and accept death and decomposition.” 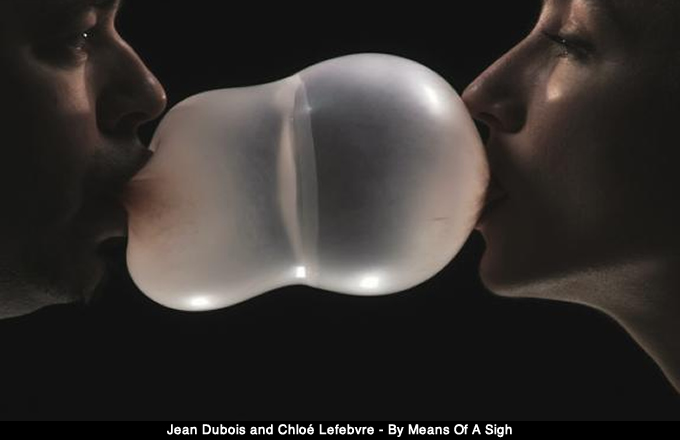 In addition to the Seeking Silicon Valley exhibition, the Biennial will feature a multitude of museum and gallery exhibitions, shows, panels and performances around Silicon Valley, in San Francisco, the East Bay and online, in addition to astonishing public art projects that will light up the streets of downtown San Jose, float 10,000 feet above the Bay Area or play on your mobile device.

The San Francisco Museum of Modern Art is presenting two prime events as part of the Biennial: Frequency and Volume, an interactive video and sound installation by the esteemed Mexican-born media artist Rafael Lozano-Hemmer, which opens November 3, and whiteonwhite:algorithmicnoir, a continuous video by the estimable installation and video maker Eve Sussman that focuses on experiences of placelessness in a dystopian Siberian town. The film, which is controlled by a computer algorithm and unfolds differently at every screening, plays in the museum’s theater September 27-30.

San Francisco designer known as ISHKY is creating a spectacular public artwork called Pi in the Sky. Sending five synchronized skywriting planes on a two hour journey across the Bay Area – over a pantheon of mathematically inclined institutions: NASA Ames, Livermore Labs, UC Berkeley, Stanford University, Google, Facebook, Twitter and Apple – Pi in the Sky will fill the blue expanse with streams of numbers, 3.14159265… The planes, which will be released sometime during the opening weekend of the Biennial when the weather is optimal, will be equipped with dot-matrix skywriting technology that produces numbers nearly a quarter-mile tall. Stamen Design, the highly regarded San Francisco geo-mapping firm, which is also creating a commissioned online work for the ZERO1 Biennial that maps the movement of private shuttle buses bringing employees to various Silicon Valley high-tech campuses, is one of the technical partners for Pi in the Sky, which will be filmed from the air by plane and documented on the ground via Stamen Design’s geo-mapping and crowd-sourcing tools.

The international artists’ collective Manifest.AR is creating site-specific augmented reality artworks that superimpose virtual objects on corporate campuses and famous Silicon Valley landmarks. Biennial visitors will be able to experience the artworks around the Bay Area by using geo-location software, on their mobile devices.

Working with the San Jose Public Art Program, ZERO1 has commissioned other engaging public art pieces such as Datagrove, by the award-winning San Francisco experimental architectural design and research firm Future Cities Lab. A glowing grove of undulating forms, lit by LEDs, will sprout in the courtyard of San Jose’s historic California Theater beginning on the Biennial’s opening on September 12, translating live social-media data and atmospheric conditions into shifting patterns and intensities of light and sound. The Datagrove’s luminescent fibers will respond to online data and the physical presence of people.

Celebrating the myriad exhibitions, events, and performances occurring throughout the Bay Area during the 3 months of the ZERO1 Biennial, visitors to the Biennial’s opening weekend will find themselves immersed in a visually impressive meeting of contemporary art and technology as dozens of artists unveil their Biennial projects.

From the Friday night public street festival, (e)MERGE that will transform a three-block zone of downtown San Jose into a pulsing Silicon Valley village, to tech-wise artists showing new works commissioned by ZERO1 in storefronts and on the sides of buildings as part of ARTHERE, a new Bay Area pilot art program that launches at the Biennial, to the debut of the Biennial commissioned Urban Screen, which during the opening weekend will include Bubbleware, a 100-seat outdoor theater designed by San Francisco artist group Rebar – the Biennial’s opening weekend will set the stage for the artists, curators, and Biennial partners as they challenge notions of place and identity, and investigate the role Silicon Valley has played in changing the ways we work, live, and communicate globally. 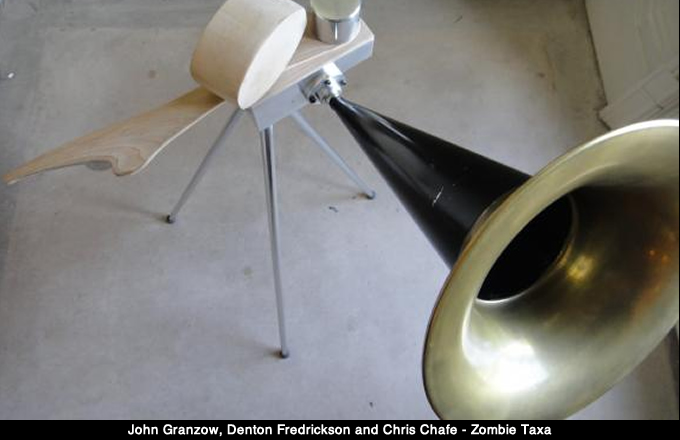 In 1966, Robert Rauschenberg and engineer Billy Klüver led a team of 4 visual artists, 2 dancers, 2 musicians and a team of engineers in the creation of 9 evenings: Theatre and Engineering, a historic series of live experimental New York performances merging art and technology. Inspired by that series, the ZERO1 Biennial will present nine live interdisciplinary performances by artists who are tapping new technologies to enrich their work.

The performances, which take place over nine consecutive weekends, over a period of three months, cast a wide conceptual and stylistic net. In September, San Jose will be host to performances by San Jose Taiko, presenting a dazzling display of Taiko + Technology, and multi-disciplinary artists from the University of California, Santa Cruz preforming Three Bodies, delving into the Pythagorean Three–Body problem through music, dance and interactive technology. October will highlight performances at San Francisco Museum of Modern Art, Headlands Center of the Arts and Stanford Institute for Creativity and the Arts. Later in the month of October, the acclaimed Alonzo King’s LINES Ballet will create a new ballet in collaboration with renowned media artist Jim Campbell, who merges film, sound and LED light installations, at San Francisco’s Yerba Buena Center for the Arts. Continuing into November performances will include Nina Waisman’s As We Move, So You Think, at the Montalvo Arts Center and Lucky Dragons will be presented at Southern Exposure in San Francisco.

WHERE DO YOU GO TO SEE SILICON VALLEY?

“Based on the belief that artists, including artist/engineers, artist/scientists, artist/technologists, are the new provocateurs and an untapped source of innovation,” says ZERO1 Executive Director Joel Slayton, “the Biennial provides a platform for these exceptional contemporary artists to achieve extraordinary creative outcomes that inspire and provoke change. This year during the Biennial” he adds, “the organization is both opening the doors to our permanent public space, the ZERO1 Garage, and opening the Silicon Valley tech corridor to the potential for artistic genius. With over 45 cultural and tech partners, and the Biennial’s extensive schedule of exhibitions and programs spanning the entirety of the Bay Area, the ZERO1 Biennial will clearly demonstrate that contemporary art can successfully re-imagine the idea, the place, and the experience of Silicon Valley.”