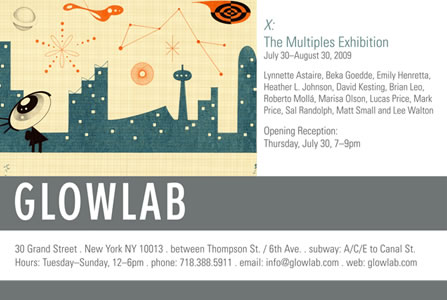 Glowlab is pleased to present the group show X: The Multiples Exhibition, bringing together thirteen artists producing works linked via their mode of production.

The artists included have published, screen-printed, photographed, performed and sculpted pieces that are identical either in manufacture or concept. The show’s title refers not only to the mathematical function of multiplication, but also to the crossing of aesthetic, commercial and conceptual boundaries when art is made in multiples.

Lynnette Astaire, David Kesting and Roberto Mollá present limited edition publications: 25 to Life, Utopia Parkway and Kelly Look at the Stars respectively. Astaire’s work is informed by her childhood experiences and shaped by her background in commercial photography resulting in a provocative mix of symbolism, self-study and cultural reference.

David Kesting is a Brooklyn-based artist whose minimal yet intensively expressive line works on paper reflect a keen interest in the tensions and vulnerabilities of human relationships. Mollá’s work draws on a variety of cultures to depict a strange and beautiful “floating” world reminiscent of the ukiyo-e genre of Japanese paintings and prints.

Beka Goedde’s new sculptures of tiny dwellings give the show a different dimension. The pieces are not identical in their final form, rather in the concept and the raw media of their production. Goedde, interested in movement via decay, continuation and perception, describes the sculptures as a drawing that shifts through multiplicity and time. Conversely, Marisa Olson’s sculptures are seemingly identical but rely on the viewer’s interaction to reveal their distinctions. Olson reclaims cassette tapes, paints them gold, and presents them as sculptures that should be valued as Time Capsules rather than discarded as defunct technology.

Heather L. Johnson’s constant relocations as a child and current travels inform her work that records memory, distance, and identity by way of intricate mapping. Brooklyn-based Sal Randolph produces independent art projects involving internet-mediated gift economies, social architectures and one-on-one interactions. Lee Walton is a performance artist interested in circumstance and social interaction whose photographic edition Hiding Behind Objects blends humor as it questions the reality of a given scene. Brian Leo, referring to his prolific process as a “garbage parade” of paintings, addresses culture, politics and American identity. 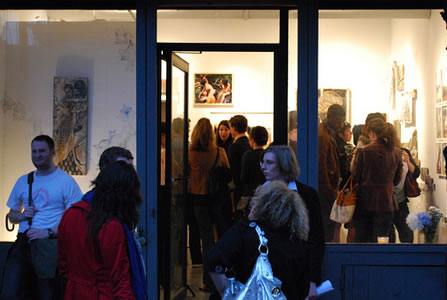 Several of the artists in the show will exhibit screen-printed works, a medium defined by its means of multiplication. Mark Price of the Philadelphia collective Space 1026, offers new works manipulated to mirror each other by inversing processes during production. Emily Henretta screen-prints images on garments dealing with the intersection of built and natural environment.

By wearing these images a further investigation of the idea of inhabitation takes place. Two artists affiliated with London-based print collective Black Rat Press, Lucas Price and Matt Small, will exhibit with Glowlab for the first time. Lucas Price is a prolific street artist whose paintings and prints are self-reflective and intimate. Matt Small’s portraits of marginalized members of society force the viewer to reconsider prejudices.

The long, slow days of summer provide the perfect opportunity to spend time among the subtle distinctions that evidence the artist’s hand in seemingly identical pieces. X: The Multiples Exhibition opens at Glowlab with a reception for the artists on Thursday, July 30th and remains on view through August 30th.