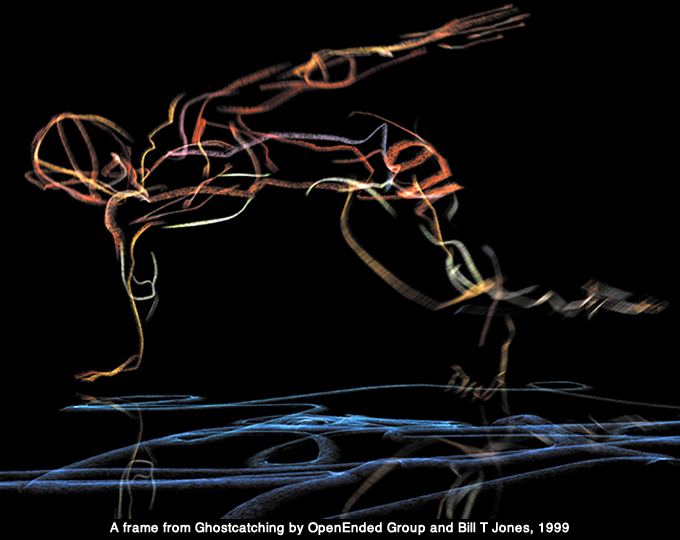 During the last decades fashion attitude went closer to the technological experimentations, mixing the importance of creating dress characterized with a fashionable allure, with a continuous need to answer to requirements that the nowadays life addressing people wearing.

There are until now different examples of how to combine technological issues to fashion; we have seen the creations of Hussein Chalayan (http://chalayan.com/) with his revolutionary dress transforming itself when the model wears it (so it is about technological devices sewn on the dress such as movement sensors and vertical slats that puff out or stretch the vest), like the Transformer dresses of the 2007 collection. Or, some years before in the early ’80s, the highly polished work with plisse of the large famous Japanese designer Issey Miyake in which technology is involved as instrument for a new kind of conception of clothes (http://www.isseymiyake.com/).

In the United States the tendency to combine technology and fashion was very appreciated from the begging, and there are a lot of important realities where this relation is carried on with remarkable results, by academies, designers network, dedicated convention. An important and international centre all over the world as such as MIT- Massachusetts Institute of Technology, for example, has different programmes and projects dedicated at the studies of wearable computing and inter-connection with designers and scientists for creating new concept of wearable technoligies in fashion, sport, health, everyday life, etc. (http://www.media.mit.edu/wearables). 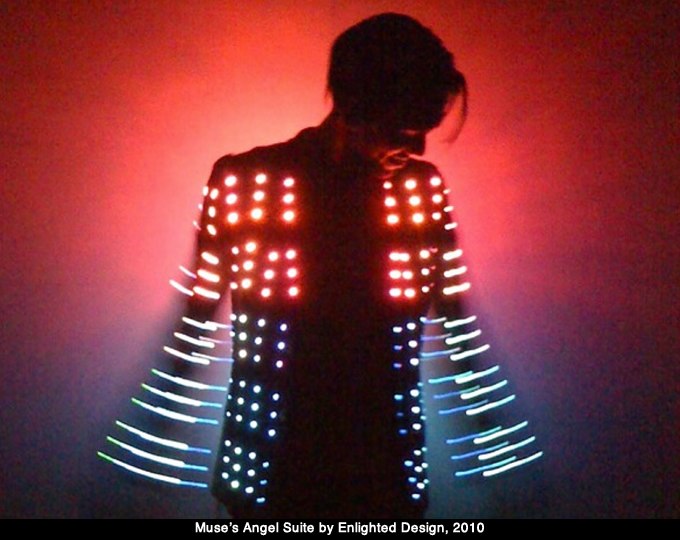 As well in New York we have FIT-Fashion Institute of Technology, a recognized college for design and fashion art. There are also several designers from United States that have tried to realized a different style of wearing out from the traditional scheme and they are at the edges of fashion from a side and from another one at the boundaries of hi-tech and performing art.

On last March it took place in Austin, Texas, one of the most leading trade show in North America where in four days succeeding a lot of exhibition spanning the innovations about the three fields of Interactive, Music and Film. SXSW Trade Show has been from 8th to 17th of March 2012: it was the fifteen edition and during all the last years the key element of this event has been exhibiting in industry related trade shows. Usually the trade show involves artists and labels and industries at the cutting edge of the technological research, applied in different ways – from video, to interactive 3D systems, to the music and wearing.

This edition 2012 had an important Technology and Fashion session showing the language of art and design expressed through the intertwining of technology and fashion. Using recent and new technologies, amazing things are happening to clothes: face masks that are a perfect fit using 3D scanning, 3D printed shoes, clothes that display carefully designed lighting as art and ‘print’ words from Twitter and other sources interactively on the fabric. This session highlights just a few of the amazing things that can be done when technology is combined with creativity. People who talked and took place in this session are, in order: Join Ping Fu, Alison Lewis, Janet Cooke Hansen and Sheridan Martin.  They showed the processes and thoughts that go into producing wearable works of technology and each one of them represent an important attitude to approach that work. 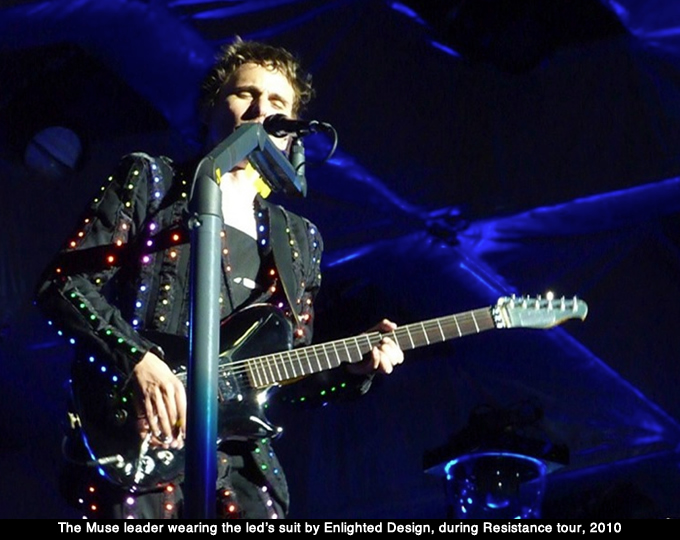 One of them, Janet Cooke Hansen, is the president and chief Fashion Engineer of Enlighted Designs, Inc. her own business from the dream  to became a light-up clothing designer (http://enlighted.com/index.html).

Her fifteen years work on lighted dress brings her to became a pioneer in this field, and her results are a meltin’ pot of fashion, art and technologies. The idea is to create costumes and clothing with particular colored LED on them. They could be jacket, trousers, gloves, long dress and particular garments that her team creates especially for performers in the entertainment industry. The Enlighted’s creations in fact are very appreciated by famous pop singer like Daft Punk, Muse, and many others, and also by performer like Cirque du Soleil and others worldwide artists for their live shows, characterized by important visual effects and great set design.

For example Enlighted created a lighted suit for Matthew Bellamy, the lead singer of the English alternative rock band Muse, during the Resistance tour, in 2010. The jacket had hundreds of led-coloured stripes and in the dark of the stage these particular lights broke down the body’s shape through its own movement. Then the viewers couldn’t recognize the exactly human body of the singer because it became a whole of sticky lights in the space, creating a spectacular and suggestive effect.

For the M.I.A.’s performance on the main stage at the Coachella Music Festival on April 18, 2009, the Enlighted‘s staff installed EL wire on a variety of pieces of clothing both for lead singer Maya Arulpragasam and for the dancers, as well as accessories for several other members of the band. All the backup dancers wore classic hip hop clothes with led’s all along the stitching, and then the figures presented themselves dancing as empty outlines moving and creating catchy virtual-like choreographies. 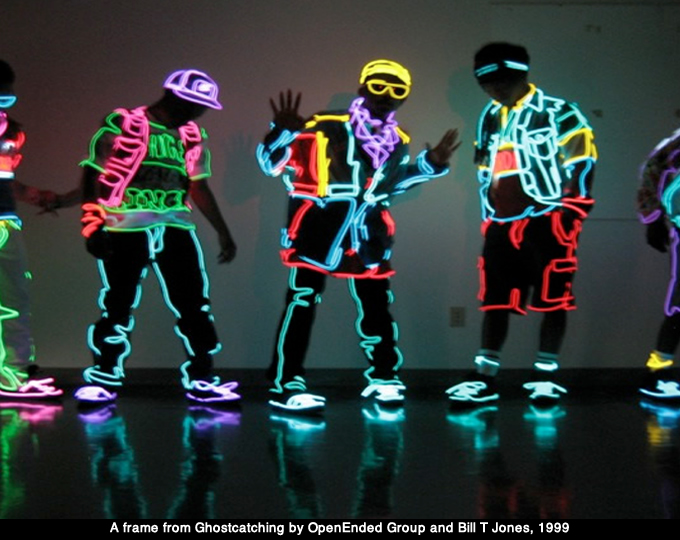 It reminded, in fact, a specific and very famous experimentation of virtual dancing such as the one created in 1999 by Paul Kaiser and Shelley Eshkar of OpenEnded Group (http://openendedgroup.com/), and the American choreographer Bill T. Jones: Ghostcatching. In that case the body of the dancer, synthesized by particular software, became a mass of like drawing-lines and pastel colours, painting in the digital environment his dance. For doing that there were a lot of intermediated steps, like the work with the motion captures, the digital passage and the ri-elaboration of the human figure, deleted, or rather turned in a virtual character.

In the work of Janet Cooke Hansen, and her collaborators in the Enlighted Designs, even if the effect could be pretty similar, the process is easier and almost handmade. And once again, it is in real, with real people dancing, with an audience “here and now” and this idea permits so many different solutions and quicker way for catching audience immediately. But the basis idea is emphasize the human movement in a sort of absence of the body, leaving a whole of led’s and particular, beautiful garments the duty to carry the rhythm, the weight and the intent of the artist.

Obviously, Janet has a visceral artistic interest about technology. She paints in an abstract geometric style, and creates illuminated wall panels and sculptures, in addition to the lighted clothing.

Another important panel chair at SXSW Trade Show was Alison Lewis, CEO of iHeartSwitch.com. She chose the important Texan event for showing her last project: Presence of Heart, an emotionally functional dress that uses heartbeat as a fashionable expression and human connection (http://heartbeat.agentofpresence.com/)

The demonstration was very powerful and interesting, proving how technologies can be involved in fashion and how can interact with the human body. This heart-sensing dress displays the wearer’s heartbeat as light and sends the beat wirelessly to mobile devices. As the model walked her dress glimmered with cascading light to the rhythm of her heart. Alison then held up an iPAD that received a signal from the dress and activated a graphic pulsating heart in time with the model’s. It is a perfect example of interactive fashion and style, born from the idea of Lewis and her entourage of a kind of fashion as an intersection with technology through the principles of interaction, communication and beauty.

This kind of dress carried out something that usually we can’t see as the rhythm of the heart, but at the same time the devices were not as well visible for the viewers and not officious for the model, thanks to the wireless function.

For Alana Yoel, co-founder of Agent of Presence, the lighting of the dress was so subtle that the model was the centre of attention without being a spectacle. And then this reaction proves to Yoel that a stylish mass market is ready for interactive clothing. 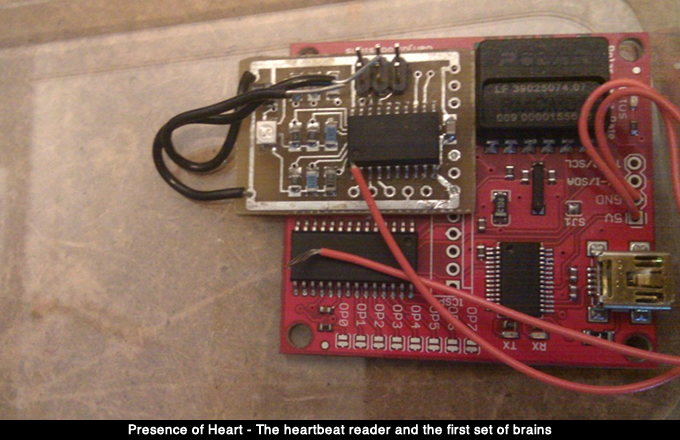 Then, the two works of Janet Cooke Hansen, first, and Alison Lewis are obviously diametrically opposite to each other: the first stakes one’s all on a easy to apply and much visible technology such as colored led’s; instead the second one is more complicated to realize, setting up thanks the hard work of specialized informatics technicians, and the technological presence in form of devices like video, software, computer are not perceived, but it is possible to see just the final product and its incredible effects.

The SWST Trade Show in Austin is an important showcase of the new technological tendencies in different fields like music, film and others; this last interest in Fashion is a sign of how in the next future our life-wear will be more and more qualified by this kind of research, in all the different aspects of our lives such as sports, medical, work and so on. Fashion is not more just for designers but is clear that it is becoming an important discipline meltin’ pot of different and scientist knowledge.