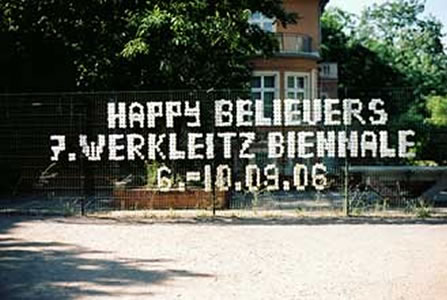 The biggest media arts festival in East Germany, also known as the ‘Documenta of East Germany’, will once again take place in premises of the Volkspark Halle (Saale). From 6th to 10th September the Werkleitz Biennale will present approximately 100 international contributions of contemporary art and culture. The biennial features an exhibition with 30 art works, 13 film programmes with a total of 56 films, performances, lectures, roundtables and DJ-events.

Throughout the last decade the general interest in religiosity and religious phenomena has increased. The 7th Werkleitz Biennale entitled”Happy Believers” takes a close look at the role of belief and religion in present day society.”What do we believe in?” and “Why do we believe?” are the central questions guiding the production of the art works. These investigations go beyond an understanding of belief in a strictly religious sense.Visitors of the Church Congress, Zen-Buddhists, football fans, brand fetichists and hobby astrologists – they all have their own belief.

It seems that a new longing for meaning and wholeness develops alongside the ongoing process of individualisation and globalisation. Characteristic for ‘patchwork religion’ is that people create their own belief systems from different sources: happy believers.Whereas, the media often stages events using religion for political and economic purpuses. The art works presented at the 7th Werkleitz Biennale approach this complex field from different artistic view points: some art work investigate the fascination with belief and highlight the moments of happiness it gives people, while other art works critically examine the ways religion is instrumentalised. Art works specifically produced for the biennial deal with specific local forms of belief in a Federal State known for its a-religiosity, Saxony-Anhalt.

Many of the participating artists will be present during the festival. Thus, the biennial once again provides a space for intensive exchange between artists, culture producers and the general public.