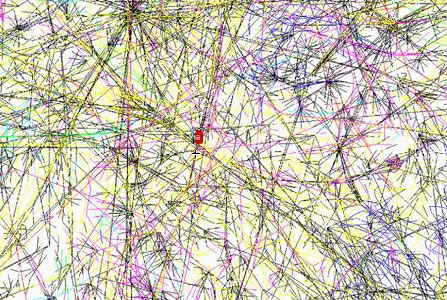 When in 1960 Paul Baran went to propose a communication network that could survive a nuclear attack, he gave us distributed network and packet switching. Everybody knows that. What is less known is that his epochal Rand Memorandum RM-3420-PR was published with a terrible omission:

Baran insisted that the true last line of defence of any distributed network would be a file extinguisher. However, he indicated this function with a red dot; due to the limitations of 1960s-era black-and-white printing, this key element was not visible in his publication. We can now recognize that today’s internet vulnerabilities are a direct result of this tragic mishap. This simple web utility rectifies that error, which almost cost us the web. Now the internet is finally safe, as Baran originally intended.

File Extinguisher – says Peggy MacKinnon – the latest work by this pioneer net artist, claims to rectify an error in engineer Paul Baran’s seminal Rand Memorandum, RM-3420-PR. First published in 1960, the document blueprinted a communication network invulnerable to nuclear attack. Cosic uses the memo to springboard into tongue-in-cheek land. Due to the limitations of print technology, in 1960, Baran’s document omitted a red dot identifying a file extinguisher as the network’s last-ditch safeguard. “We can now recognize that today’s internet vulnerabilities are a direct result of this tragic mishap,” says the artist. His site presents a map that restores the file extinguisher, which looks remarkably like a fire extinguisher and can be used to browse for and extinguish users’ files. Fusing retro-technology with Cold War paranoia, this ! project is as much present-day social commentary as it is vintage deadpan. Cosic says of his project, “Now the internet is finally safe, as Baran originally intended.”