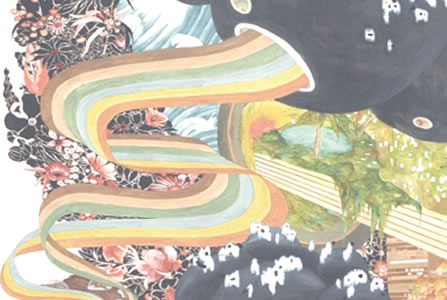 Defined by the sounds of the “808” drum machine and “303” bassline sequencer (both developed by Japanese electronic music manufacturer Roland) Acid House music was created by Chicago-based DJs during the mid-1980s.

Visual Acid will too be defined on the basis of these revolutionary music computers. The centerpiece of the installation is a genuine 808, its basic functions harnessed to trigger a series of stroboscopic, fluorescent light fixtures through the unit’s individual audio outputs (a remarkable and unique feature of the 808), thereby reimagining the instrument as a fully interactive visuals-generating tool. As its companion, an “Optical 303” squelches the imaged representations of signature Acid basslines, which are projected through rotating prisms and shot throughout the space as cinematic, rainbow-infused light.

To coincide with the exhibition of VISUAL ACID, a variety of related events held will be hosted at Secret Project Robot, culminating in a “Bubblifique” extravaganza on March 25. As the space does not hold regular hours, these events will be the only times VISUAL ACID is open to the public.