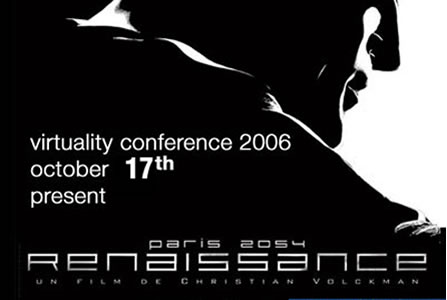 The annual conference dedicated to virtual reality has become a celebrated meeting place and a venue for updating for all those who work and are interested in cinema, computer graphics, animation, post-production, simulation, video games and new frontiers in digital art . This year Virtuality is in its 7th edition and will take place in Turin from October 17-20, 2006 at the Centro Congressi Torino Incontra .

The initiative is realized by the Comitato Organizzatore Virtuality and promoted by the Camera di Commercio and the Fondazione CRT , with assistance from the Compagnia Di San Paolo , the Comune di Torino , the Regione Piemonte and the Provincia di Torino . Virtuality will continue with its extended four day format which began in the 2005 edition. This year the conference will have a slightly modified set up in which the first day will be dedicated to workshops for qualified professionals, followed by the usual format in which the rest of the conferences, debates, screenings and demonstrations for the remainder of the meeting are open to the general public.

The ambitious aim, launched last year, of exploring all the elements of a digital revolution that is by now fully upon us and is becoming a terrain of cross-fertilization between diverse fields of culture, industry, theater and science, united in a common language of technologies, suggests the theme of this year’s edition: Real D reams . In this way Real Dreams is a particularly rich and stimulating program for everyone working in the digital media industry. In addition to cinema , broken down into all of its areas, and to other large scale themes for the world of digital images that have eventually acquired a significant space within Virtuality, including video games and automotive design , this edition will give special attention to the innovations in the world of advertising . In all the sections, as always, famous international guests, – including Oscar winners – experts from the major production houses, researchers and avant-guard experimentors in their specializations allow for an ideal venue in order to know about the new, and often incredible and subtle details of a “virtual reality,” destined to have increasingly more impact on the economic, cultural and social realities of our epoch.

Virtuality, reconfirms Torino in its role as the Italian “Digital Capital,” reinforcing its own job as a national point of reference event through a series of cooperative agreements with the principle conferences in the field, including the American ACM/Siggraph , Imagina of Montecarlo, the Festival International du filmd’animation à Annecy in France, the FMX of Stuttgard in Germany, and Mundos Digitales of A Coruna in Spain.

Certain related events reinforce the national and international relevance of this conference, consolidating the leadership in the fields of digital technologies. By tradition, Virtuality will be hosting the annual Technical and Scientific Convention , MIMOS (Italian Modelling and Simulation Movement), the association of reference for professionals in Italy who work in virtual reality and simulation in the most diverse applications. As of the 6th edition, the conference gave added attention to areas in which technologies are in a phase of great expansion or areas that present particularly original characteristics. This year, in addition, Virtuality will hold an annual symposium on Human Computer Interaction , one of the most important appointments of the season regarding the relationship between man and machine. The 2006 edition, entitled Virtual Mobile Guides is dedicated to new types of applications, full of never-before-seen multimedia capabilities, made possible by the recent availability of very powerful mobile devices such as cell phones, palms and portable videogames.

A continually prominent aspect of Virtuality is the section dedicated to digital technology for films .which will be featuring authoritive specialists from major American and European studios. An in depth presentation will be made of the Pixar hit film, Cars and the MPC (Moving Picture Company) will present the latest in the series X-Men III . Among the guests this year will be Pixar’s Michael Kass , winner of the 2006 Academy Award for software realization for the realistic simulation of clothing in film, Mark Sagar of WETA, one of the major world experts in the creation of digital actors (including the giant in King Kong ), Parag Havaldar , software engineer of the film Monster House , and Henry LaBounta , the supervisor of special effects of many famous films, who is now working in the field of videogames as the Chief Visual Officer for EA-Sports.

To complete the picture of the creative process that new technologies are utilizing in the area of cinematic production, Virtuality will be hosting such professionals as Sebastian Sylwan of Digital Domain and Andrea Maiolo , the talented Italian who emigrated to California and is now the Technical Director for character realization at Light and Magic for which he worked on Pirates of the Caribbean: Dead Man’s Chest . Of particular importance also will be the presence of Isaac Kerlow , recognized technological animation guru and author of the essential text in the field, The Art of 3D Computer Animation and Effects and Takeo Igarashi , the “wizard of interactivity,” winner of the 2006 Siggraph Award and professor in the department ot Computer Science at the University of Tokyo.

Furthermore Virtuality will be hosting, in collaboration with the RomeFilmFest (the celebrated film festival of Rome), the cinematic premiere of the long awaited, experimental animation film Renaissance , directed by Christian Volckman and winner or the Feature Film Award at the Festival of Annecy.

This year’s edition broadens and intensifies the automotive design and the videogame sections that were innaugurated in 2005 and were highly recognized both for the audience enjoyment as well as for the qualified participation by speakers and businesses. The automative design section, organized in collaboration with ANFIA was coordinated by Lorenza Pininfarina while the videogame section, organized in collaboration with Leader and Microsoft Italia was organized by Fabrizio Vagliasindi .

A new addition to this year’s conference will be two sections dedicated to digital aspects that are particularly relevant in contemporary society. The first explores the new technology in the advertisng field and will be structured in a specialized forum that will see the participation of various internationally famous studios. Among these, two from the “Magnificent Five” who were chosen by Coca Cola for the new image campaign, MK12 and Lobo , who will attend Virtuality with their respective creative directors, Ben Radatz and Mateus de Paula Santos . The second section, which is connected to the MIMOS convention, is dedicated to digital technology developed for the management and promotion of cultural heritage, illustrated by some of the major Italian experts in the field and by the specialist Flavia Sparacino . Dr. Sparacino is the founder of the interactive design studio, Sensing Places, and is also a researcher at the Media Lab of MIT (Massachusetts Institute of Technology).

The workshops will be reserved to professionals and students from specialty schools and will be concentrated in a single day in order to accomodate those who work, offering an extra opportunity by proposing internationally renowned specialists as master teachers. One of the noted instructors who was well received last year and will be returning is Luca Prasso, the Technical Supervisor for digital characters at DreamWorks. Virtuality is also proud to present Andrea Maiolo as one of this year’s master instructors.

As a way of underlining its role as a meeting place for professionals, teachers and students, Virtuality will propose a specific session this year dedicated to the most advanced Italian and foreign schools of digital graphics , who will be presenting their programs and methods of study in order to offer an exhaustive and panoramic orientation for young people who are in the midst of choosing their course of study or profession. The new generation of creative people will therefore be offered the opportunity to meet representatives from some of the best European and American schools present at Virtuality. Among these will be several leading schools in computer graphic animation such as the American Gnomon from Hollywood, the French Gobelin from Paris and Supinfocom from Arles, along wih the Gerrman FilmAkademie and the Canadian Vancouver Film School . Italy will be represented by two of the most important national centers of production and specialized formation in the digital field, DarkSide and BigRock , by IED- the European Institute of Design and by the educational section of Virtual Reality & Multi Media Park of Torino. Attention given to young people is underlined also by the return of the Virtuality Award . After being successfully introduced in 2005, this competitve international section awards the best digital cinema production made by students who come from schools all over the world and is judged by a highly qualified jury.

With the intent to present the public a constant point of reference, Virtuality 2006 will also be organizing other events during the year including Resfest which will take place in Turin at the National Museum of Cinema, December 14-17, 2006 . One of the most important International events in the field of independent digital cinema, Resfest will take place in 40 other cities throughout the world. Two other Italian dates: Rome , 3-5 November and Treviso, 17-19 November, will be presented respectively by Fox International Channel and by Fabrica. After being received for the first time last year in Italy, Resfest will return in 2006 with an even richer edition, equipped with a series of screenings reserved for students who will have access to both innovative programming that is outside of regular commercial circuits, and access to deeper analysis, behind the scenes and the techniques and methods used in the making of popular music videos and tv commercials.