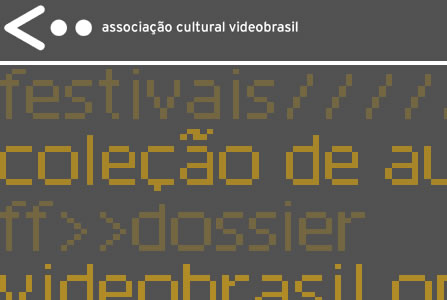 This edition of the Festival will adopt a new structure placing greater emphasis on research and production from the so-called southern circuit. Works will be selected for three exhibitions: “Contemporary investigations”, “New vectors” and”Southern panoramas”. The first of these exhibitions will stress innovation in research, while “New vectors” will focus on emergent producers or groups. “Southern panoramas” aims to bring together works that broaden the current state of southern production art. The jury will award one piece from each exhibition, and other works will be able to receive special mention.

The regulations and enrolment form are already available from the Associação Cultural Videobrasil website and the deadline for submissions is set for April 15, 2005. The selection committee will assess work from Latin America, Caribbean, Africa, South-East Asia, Eastern Europe, Middle East and Oceania. To make submission easier, for the first time ever enrolment forms can be filled out directly through the Associação’s website. Off-line submissions sent via normal mail will also be accepted.

The Festival was created in 1983 and is today the most important electronic art event in the southern hemisphere. The exhibition aims to stimulate research into new mediums and encourage interchange among the nations of the southern circuit. Each edition of the Festival brings retrospectives and especially commissioned works from major names in global electronic art.