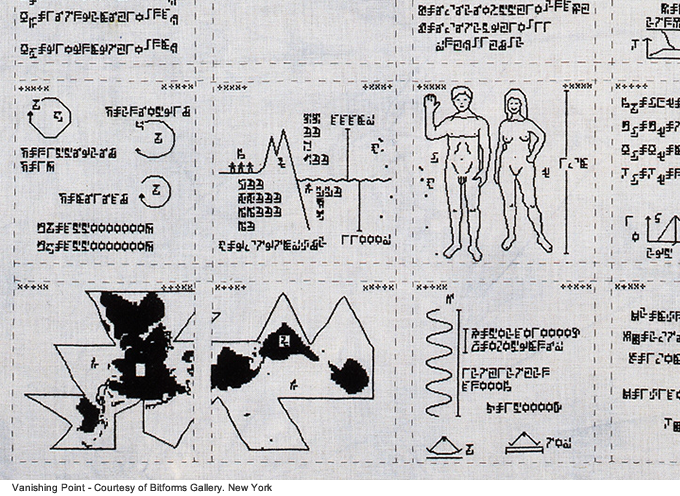 “At the birth of modern computing, a paradox: only after Alan Turing theorizes an infinitely large computer do we begin to plausibly imagine how our world could be digitally remade as small as possible. That is, it’s only after Turing fixed our technological gaze outwards onto infinity that we began our relentless dwindling inwards, towards miniaturized circuits and virtualization. Taking this contradictory movement as its content and form, the exhibition Vanishing Point presents views of a contemporary digital vastness that is both boundless and barely there”.

By understanding computing as an ongoing experiment in the incommensurate, the artists in this exhibition draw the discipline into various unlikely associations: outer-space, the afterlife, Abstract Expressionism, Greek Tragedy.

And yet at the same time, there is a move to deconstruct the traditional aesthetic associations with the infinite (e.g. “the sublime”) in terms of a contemporary virtual sprawl that is often pathetically insignificant, banal and quotidian. These analytical impulses are tempered with modes of address that are more lyrical, less direct; formal experiments within the contradictions of a new vastness that is simultaneously too large and too small to be fully apprehended.

Here, “vanishing point” refers not only to the infinitely distant and small destination where everything rushes to converge, but also to a potential moment of disappearance – an event horizon where technology swallows something once and for all…what exactly – irrationality, expressivity, scarcity, suffering? Nothing in this exhibition claims to know with certainty. The objective is not to make predictions, but to press ourselves a little closer to the arc that bends towards the limit. 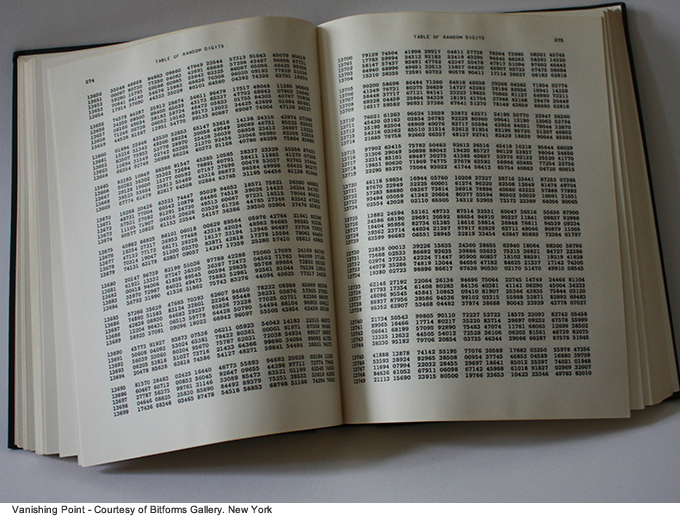 Kyle McDonald, “Only Everything Lasts Forever”, 2009

Boris Meister, “Above the Cloud – Archaeology of Social Networks”, 2012

This exhibition marks the US debut of artist Boris Meister, and the NYC premiere of recent works by KyleMcDonald, Sebastian Schmieg, Clement Valla and Siebren Versteeg.

A.E. Benenson (b. 1986, USA) is an independent curator and writer who engages contemporary technology as a means to revise aesthetic and political histories. www.benenson.ae

Kyle McDonald (b. 1985, USA) is an artist working with programmed code as medium and theme, creating intricate systems and playful environments that explore translation, contextualization and similarity. Previously his work has been exhibited at the Yamaguichi Center for Arts and Media, Yamaguichi, Japan; NODE Forum, Frankfurt, Germany; and Eyebeam, New York.  www.kylemcdonald.net

Boris Meister (b. 1989, Switzerland) is a graphic designer who uses emerging forms of screen-based images and interactivity to challenge the expectations and limits of traditional print media. His design practice is interested in how and by which means a media could carry a message. Previous exhibitions of his work include the Studio Joost Grootens, Amsterdam, and Niekolass Johannes Lekkerkerk, Rotterdam. www.ingoodwetrust.ch

RAND Corporation separated from the Douglas Aircraft Company of Santa Monica, CA, in 1948, as an outgrowth of World War II. Dedicated to furthering and promoting scientific, educational, and charitable purposes for the public welfare and security of the United States, RAND is an independent, nonprofit organization. Focused on empirical analysis, its name was adopted from a contraction of the term research and development.  www.rand.org 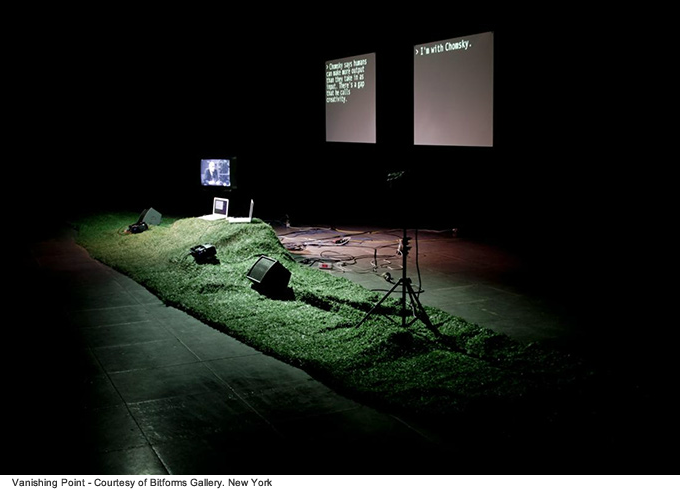 Mungo Thomson (b. 1969, USA) reimagines the materials of everyday social spaces and mass media with a voice that is simultaneously idiosyncratic and immediately legible within a long tradition of West Coast conceptual art. Featured in the 2008 edition of the Whitney Biennial, Thomson has exhibited recent solo projects at SITE Santa Fe; The Highline, New York; Aspen Art Museum; LAXART; the Hammer Museum, Los Angeles; and Kadist Art Foundation, Paris. In 2014 he will open a new project in Texas at ArtPace, San Antoino.
www.mungothomson.com

Clement Valla (b. 1979, USA) adapts computer programs and their networks to reveal the usually hidden processes, mechanisms and biases embedded in everyday algorithmic structures. Past exhibitions of Valla’s work include the 319 Scholes, New York; Villa Terrace Decorative Arts Museum, Milwaukee; and the Museum of the Moving Image, New York. www.clementvalla.com

Siebren Versteeg (b. 1971, USA) is an artist whose practice uses digital aesthetics to question the formal conventions of art – integrating historical genres of painting and the contemporary logic of systems theory or cybernetics. Past solo exhibitions of his work include the Wexner Center for the Arts, Columbus, Ohio and the Ulrich Museum of Art, Kansas.
www.siebrenversteeg.com