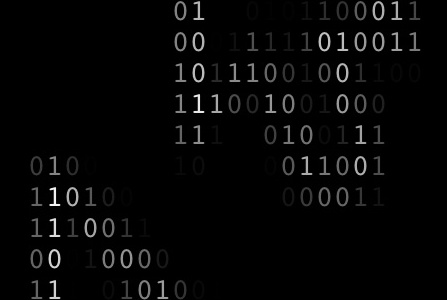 Will artists end up merely designing urban screen savers, or can we save the urban screen as an artistic medium?

A screen is a powerful medium in an artist’s hands, and public space is an appealing domain for encounters between an artist and his or her audience. Urban screens can therefore be seen as an ideal tool for artistic public interventions as well as an exciting new exhibition format. Despite an ongoing increase in the number of digital urban screens in metropolitan spaces, their potential for artistic intervention and exhibition is however only seldom exploited. Not only do the commercial motives behind many urban screens compete with their artistic potential, when artists do get a chance to use them as a platform, the medium itself often appears to fall short of its promises.

Rather than debating the medium’s hypothetical possibilities, Test_Lab: Urban Screen Savers will critically reflect on the urban screen as an artistic medium on the basis of live demonstrations. Which shortcomings of the urban screen can be distilled from present-day urban hacker culture? How do artists that make use of urban screens cope with our media-dense urban environments? And which topics do these artists aspire to address through urban screenings? As is customary at V2_’s Test_Lab, the audience will form a hands-on critical test panel for the demonstrated artworks. 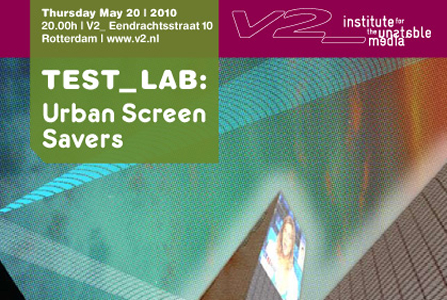 Matthias Oostrik (NL) is an artist and freelancer in the field of Visual Interaction Design.Matthias Oostrik studied Interactive Media at the Nederlands Film and Television Academy in Amsterdam, where he was trained to be a bridge between video-art and technology. After finishing his studies in 2004 he continued exploring the realm of Interactive Installations, with a strong focus on human presence.

He has a strong believe in the power of human vanity as a starting point for an interactive dialogue. Most of his installations respond to human presence and explore the relationships between the real and virtual world through means of the human body.From 2004 to 2007 Matthias Oostrik was also part of Amsterdam Cyber Theater, as a programmer and “multimedia specialist”. Matthias has presented his interactive installation at several venues, festivals and in public spaces; his E4.1 Bijlmer Moodwall has been permanently installed in the Amsterdam Zuid Oost area in 2009.Matthias will present a demo version of the E4 MotionWall on Thursday, May 20 at Test_Lab Urban Screen Savers. When people approach the interactive installation, the wall ‘comes to life’ by responding to human presence with shadows of light and sounds of joy.

Rui Guerra is involved in open source culture with a critical view on communities. His works make use of several media such as photography, video, online and offline installations. Besides teaching at several academies in The Netherlands, he has initiated self-organized communities such as INTK in Utrecht and unDEAF in Rotterdam. His work has been exhibited in several art festivals and he has collaborated with several institutions such as V2_: Institute for Unstable Media, Piet Zwart Institute both in Rotterdam (NL), The Royal Academy of Art in The Hague (NL), Arnolfini in Bristol (UK), The Art Organization in Liverpool (UK), Observatori in Valencia (ES), 0508 in San Juan (PR), Sentidos Gratis in Porto (PT).

During Test_Lab: Urban Screen Savers, Rui Guerra will demonstrate the first prototype of “Beam It.” The project consists of an electronic screen for public space that is open for user generated content: simple text messages, photos or videos can be uploaded to the screen via an online interface. “Beam It.” is developed by INTK and it is integrated in a long term research and development focused on urban forms of communication for local communities.

Toine Horvers (NL) is a performance-artist who works with text and language.Toine Horvers is a performance artist and a curator, who considers himself a designer whose works consist of simple systems and procedures for making language appear in time and space. This results in books of written drawings and works with electronic text displays in buildings and in public space, as well as sound installations and performances with text and voices.

Horvers about himself: As an artist I make performance-related sound-sculptures, text-displays, as well as ‘written drawings’, on both paper and onto architectural elements. (..) I consider myself as an heir of Performance Art, Minimal Art, and Conceptual Art. (2002)

Toine Horvers’ work is included in the city collection of the Boijmans Van Beuningen, and applied inside the Erasmus MC. It can also be seen outside the Hague Municipal Museum, Van Abbe Museum Eindhoven, Centraal Museum Utrecht, Stedelijk Museum Schiedam, and the AMC Amsterdam.

Toine Horvers and Paul Cox will demonstrate the first prototype of the Beijerkoppen project during Test_Lab: Urban Screen Savers.

Paul Cox (NL) is a Rotterdam based artist.Paul Cox is a graduate from the Koninklijke Academie voor Beeldende Kunst en Vormgeving in ‘s Hertogenbosch and the Staatliche Kunstacademie in Düsseldorf, Germany. His work resolves around long-term projects, such as his 1999 project ‘I came by boat’ that ran for 9 years and included the reconstruction by hand of a sail-boat. In 2004 Cox researched the desirability and possibility of a monument for French philosopher and writer Pierre Bayle, and published the outcome of this research as a ‘Denkmal Studie’.

Paul Cox is involved in the Beijerkoppen project, that is developed together with Toine Horvers and V2_Lab. The artists will demonstrate its first prototype during Test_Lab: Urban Screen Savers on May 20, 2010. 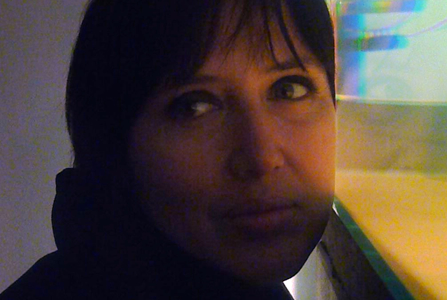 She has lectured and led workshops on topics such as the relation of artist, performer and audience to networked space and the urban topologies of space, place and non-place at several educational institutions including Bauhaus Universität (Weimar), Kunsthochschule für Medien Köln, Dance Unlimited (Amsterdam), Willem de Kooning Academie (Rotterdam) and Kunsthøgskolen i Bergen (Bergen). She has received numerous grants and awards for her work including the Prix Ars Electronica honorary mention within the interactive art category, the Vida 8.0 Art & Artificial Life Award and the Transmediale Award for 2010.

Gunnar Green (DE) is a part of the multi-disciplinary design practice “TheGreenEyl.” Gunnar Green studied Visual Communication at the University of the Arts Berlin and completed his MA in Design Interactions at the Royal College of Art in London. He is one of the founding members of the Berlin-based collective TheGreenEyl, formed by Richar The, Frédéric Eyl and Willy Sengewald. Offsprings of the Berlin University of the Arts, they have been working collectively since 2003, aiming to explore the dynamics of unconventional interaction between people, their environment, and technology. With the unrestrained blend of various design-techniques, the collective purposefully escapes any attempt of categorizing its work. Gunnar Green will demonstrate the Parasite project by TheGreenEyl at Test_Lab: Urban Screen Savers.

Parasite is an independent projection-system that can be attached to subways and other trains with suction pads; using the speed of the train as parameter for the projected content, the projection starts with the train moving inside a tunnel. Parasite confuses the routine, habits and perception of the train-travelling-journey: the ‘parallel worlds’ – projected with Parasite – allow the train traveller a glimpse into a different world full of surrealist imagery.