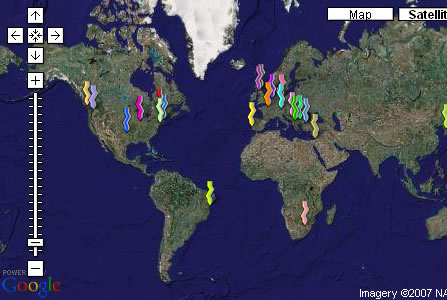 ‘Locative media’ are hot: from cell phones to GPS, to other means of satellite communications. A world without the latter seems unthinkable, or perhaps even non-navigationable. Experiments with locative media
within the arts have mostly focused on and taken place within an urban context. Upgrade! Amsterdam [tag & track] offers a counterbalance and highlights projects where the technology itself is not the main feature, but
rather how their usage functions within specific contexts, and generates a multitude of meanings and experiences: from Fulani nomads in Nigeria to the migratory routes of the Montagus Harrier between Groningen and Mauritania.

| Nomadic Milk Esther Polak Michiel de Lange |
NomadicMILK aims to raise awareness about migratory patterns of the Fulani nomads in Nigeria through an artistic visualization of dairy routes, achieved by combining new media such as global positioning systems, mobile telephones and a GPS.

| Capturing the migration of Montagus Harrier Ben Koks c.s. |
Not only are the migratory routes of the harriers (equipped with tiny 7gr satellite backpacks) between the Netherlands Mauritania, Senegal and Nigeria of interest here, but also the narratives connections they forge between Dutch ornithologists and farmers in Western Africa.
http://www.grauwekiekendief.nl

| Just van den Broeke |
Since 2005 involved in projects based on GeoTracing, an Open Source platform initiated by Just for tracking and tracing.
http://www.justobjects.nl

Upgrade! Amsterdam [tag & track] is a series of gatherings for and by new media aficionados, artists, geeks, media makers and breakers, and the generally curious. Point of departure is the premise: No upgrade without a downgrade. Upgrade! Amsterdam [tag & track] is organised by Nat Muller & Lucas Evers, is actively hosted by de Melkweg, and kindly supported by VSB Fonds and Mondriaan Foundation.

Upgrade! Amsterdam [tag & track] is an international, emerging network of autonomous nodes united by art, technology, and a commitment to bridging cultural divides. Since April 1999, a group of new media artists and curators have gathered in New York City . The first meeting took place at a bar in the east village with Tim Whidden & Mark River [MTAA], Mark Napier and UPGRADE! founder Yael Kanarek.