Trying to find beauty in complexity. The Internet-Data of Dries Depoorter 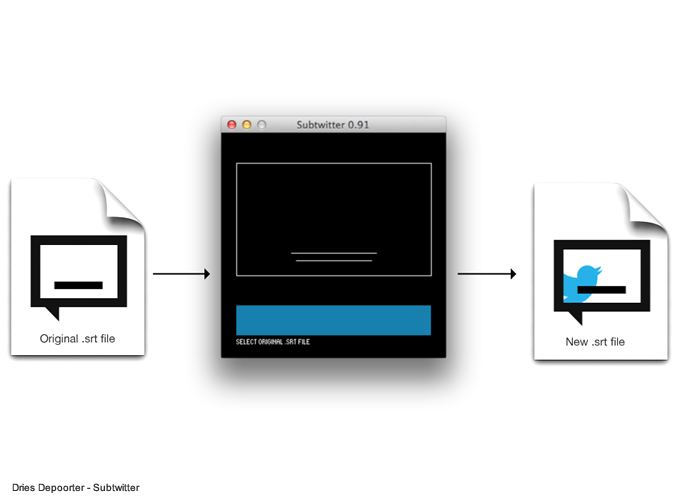 Dries Depoorter is a young Belgian media artist who focuses his work on programming languages and digital media. As declared, he “tries to find the beauty in complexity” when performing his artistic research. He is just graduted his media-art study program at KASK, School of Arts Ghent (http://www.kask.be/).

One of his last works, Subtwitter (2013, http://www.driesdepoorter.be/subtwitter/) featured in the Digital Now: Drones/Birds: principles of ubiquity exhibition held in Brussels the last April, catched the attention of the audience for its innovative approach and its questioning of social media tools (I reported about the exhibition for Digicult, as you can read here: http://www.digicult.it/news/dronesbirds-princes-of-ubiquity-the-bird-metaphor-as-a-contemporary-cultural-form/).

Subtwitter is in fact a small application that scans subtitle-files (.srt) and replaces them with similar tweets. For its input the application uses an original subtitle-file of a movie or series (provided by the audience). The application then looks into each separate sentence of the subtitle and crawls the twittyverse for a similar tweets (i.e. on Twitter). The output of the program is a completely new subtitle-file in which all subtitles consist of computationally associated tweets. Though Subtwitter it is possible to “sub tweet” any kind of movies, series or video material. This project shows the recent interest of the artist for social media as main source for data information introduced by human beings. 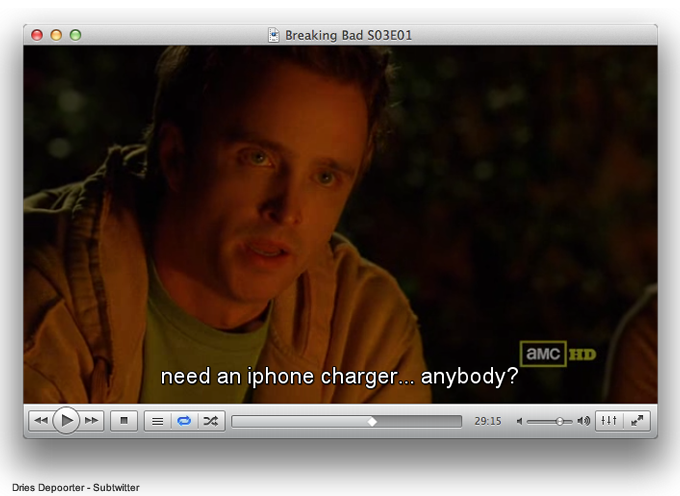 His most recent work, Gradient (2013, http://www.driesdepoorter.be/gradient/) focuses more on visual processing. It is a realtime-generated gradient of 2 colors extracted from 2 online webcams. The webcams are placed on the opposite side of the world. One in Asia and the other in South-America. In every webcam the color is extracted from the sky. So every 12hours the gradient inverts. Compared to Subtwitter this is a more visual and less conceptual work and it completely reflects the new approach of the artists in terms of artistic creation.

Silvia Bertolotti: We recently saw one of your works at the exhibition Drones/Brids: principles of ubiquity. How did you decide to present the work Subtwitter?

Dries Depoorter: I wanted to show the result of my software project and a clear explanation of it at the same time. I don’t want to explain my works with some boring side text.  Given the thematic approach focusing on the metaphor of birds, I chose the movie Birds of Alfred Hitchcock and its subtitles has been scanned by the application. I thought it was an effective example in line with the questioning about birds and their multiple meaning. With a overlay on the video I explain the Subtwitter software.

Silvia Bertolotti: In Subtwitter you focused on Twitter, but in other projects you already worked with social media (i.e. Facebook). On the other hand, some people already spoke about “social media art”. What do you think is the most interesting aspect of social media: technology, nature of communication or the networked structure?

Dries Depoorter: It’s definitely the power of the social media what I’m mostly interested in. Recently they shut down one of my favourites works www.socialroulette.net by Kyle Mcdonald and Jonas Lund. It “worked” just for 3hours. They have so much power! A plugin aimed at notifiying “unfriend” actions has recently been blocked by Facebook. www.unfriendfinder.net. I think it tells a lot about this medium… 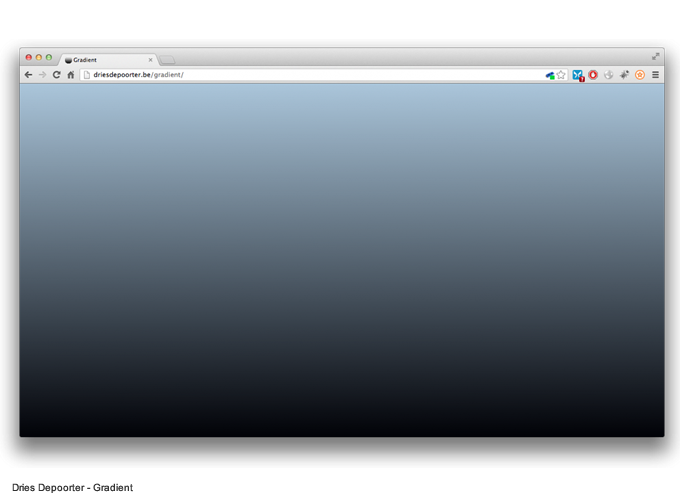 Dries Depoorter: I personally  use my Facebook account mostly for  sharing my work and personal stuff. Two years ago I created a Twitter account for my professional activities, where I follow media and digital artists and where I tweet about personal updates on my projects and works. Therefore, I consider Twitter a great resource for my work, because it allows a sharing within the artistic network I’m in. Many artists in fact not only post news, but they share their idea’s and reflections, which are an incredible source of inspiration as well as collaboration!

Silvia Bertolotti: On your website your write that “nature, a series of numbers and everyday situation”s are your biggest inspiration…

Dries Depoorter: I’m definitely interested in data from Internet mostly. APIs are one of my current sources of inspiration and material for my work…

Silvia Bertolotti: What do you mean with “Internet data” and why are you so interested in?

Dries Depoorter: With “Internet-data” I mean everything you can find on the Internet: images,texts, geo-data, google-suggestion information, open-data of cities. It’s really intresting to combine different data sets. The combinations are endless and its addictive! 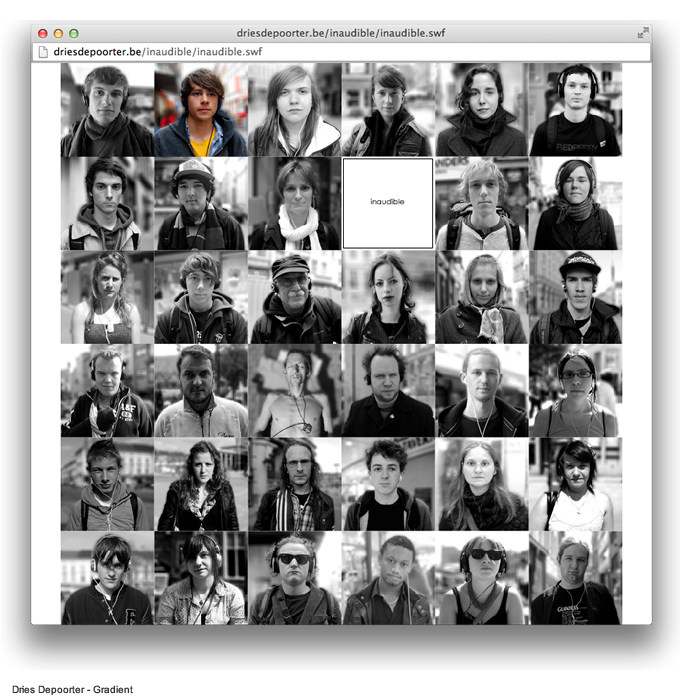 Silvia Bertolotti: Let’s also speak about the role of audio and sounds in your art? I’m thinking about ,older works as Inaudible  and 24hsoundwave.com…

Dries Depoorter: These two works are now far from my current art practice. I create them three years ago. Inaudible (http://www.driesdepoorter.be/inaudible/) comes from a question I asked one day to myself: what is people listening  to on their mp3 players while walking in the street? I think this work itself is a sort of pretext to actually ask this question to people I meet in the street.

In 2011 I had a sound recorder with me for recording all the sounds around me for a whole day. So, I created the installation 24h_soundwave where you can visualize a long print of the soundwaves of the recording. A year later I wanted to do something else with this recording. So I created 24hsoundwave.com (http://www.24hsoundwave.com/) where you could listen to the whole recording with nevertheless some fragments left out. These are private pieces for me. But you can buy them online. The prices are always different.

Silvia Bertolotti: Are the documentations and texts of your works important?

Dries Depoorter: Yes,  I think they are absolutely important! Most of my works needs an explanation. The Gradient website, without an explanation, would be just boring! I like to give the explanations and a “commercial touch”, so the visitor can easly understand the project. I don’t like super abstract works that are difficult to be read or understood.  This is also due to the fact that I want to reach more and more people, while not targeting only elitarian groups. 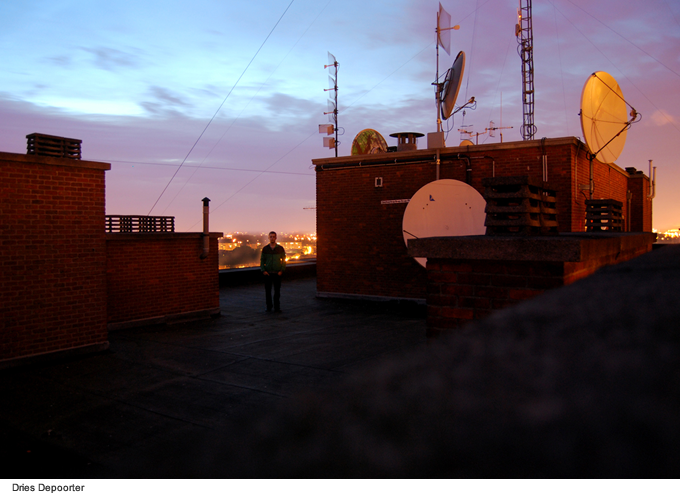 Silvia Bertolotti: What are your plans for the future? Are you working on specific projects?

Dries Depoorter: I am currently working a lot with Processing and I’m now following different projects at the same time. One of favourite projects I’m currently working on, is based on the Belgian Rail API. I create virtual worlds where persons that are constantly taking trains based on realtime data of the Belgian rails. So when a real train has a delay, the virtual person is late too. Each virtual person has his own gender and emotions. They get thir firstname and lastname from a baby name website. When two persons meet each other in a station they create a new virtual person. When a person is late (because of a train delay) they are in a bad mood so they can’t fall easly in love with someone else. It was a special challenge to write a code that can make two persons fall in love….