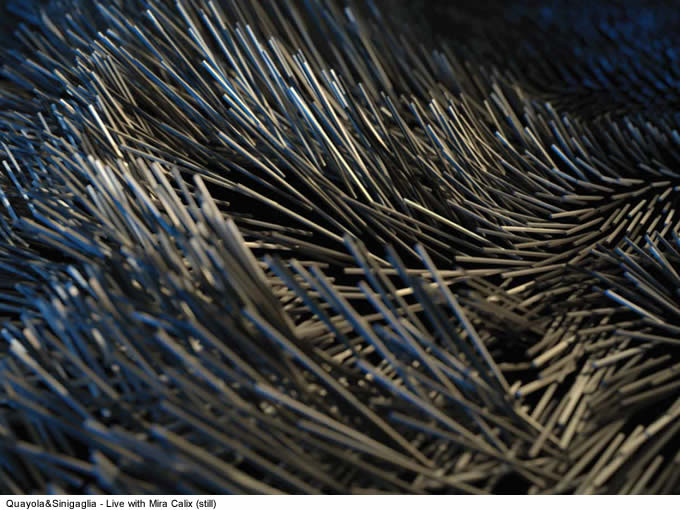 The exhibition Transparency, Fluidity and Mediation addresses the three terms of its title as the catalyzers of artworks. The pieces assembled for the show are crystallized in audiovisual and digital formats that may have been created or reformatted through the implementation of digital devices.

The platforms of New Media Art have contributed to the widespread distribution of artworks in both intangible formats of those that lack a face-to-face component. In this respect, “Telematics” enables both works and performers to interact with the audience (which in this environment can be called users). The telematic dynamic of artist-user-viewer has expanded the range of beneficiaries and consumers of contemporary art, bringing the work of differing artists from various latitudes into cultural spheres that are no longer the exclusive circuits of high and intellectual culture.

In the specific case of this exhibition, the pieces on display could perhaps be mistaken for commercial products (advertising images, banners, screensavers, etc.) due to the production formats through which they have been generated. Although these works share an element of digitization and the implementation of technological resources, this commonality reflects only a format and nothing more. 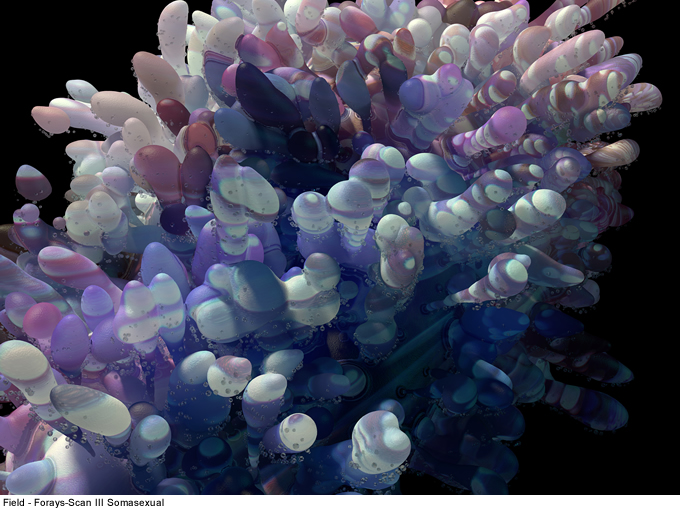 Mediatic platforms approach their audiences differently from those of traditional exhibition spaces (art galleries and museums). Recently, institutions have had to rethink their display formats and interactions with their audiences due the imminent and unavoidable immersion of our contemporary world in digital technologies and platforms. In-situ installations have reached levels of immersion and interactivity where experiences of and explorations within virtual worlds are possible without the interventions of technology or digital devices. In this category we find several analogue extensions of our senses, including glasses, headphones and prosthetics that have become everyday objects.

Installations and experimental exhibition formats have rethought the notion of the white cube, thus contributing to perceptions of art and its adaptive functions in relation to the senses. Although these formats for displaying art have contributed to conceptual debates about contemporary art, we must recognize that the distribution methods offered by the digital environment are different from those provided through a physical appreciation of art. Discussions between the tangible and the virtual are distinctive of the digital dimension, yet the works presented in this exhibition have been created as unique pieces of art that can be seen using digital display devices.

The expansion of networks within digital environments has enabled new audiences to experience artworks in innovative ways. This is made possible due to different sources of access: interactive websites, apps, video games and virtual reality interfaces, or in a more simple way still digital works and motion pieces. It is within this spectrum that the Transparency, Fluidity and Mediation exhibition is conceived. The works gathered here were either made or compiled digitally. Thanks to this feature we can appreciate digital sculptures, impossible objects, performances and actions in installation formats and through video projections inside the exhibition space of Gallery ASAB.

To borrow a concept from Henri Bergson, the virtual can be understood as the possibility of becoming, and the virtuality and immateriality of the pieces herein can be tangible as far as they can be apprehended by the interactions of our senses: vision and hearing. This measure may be tangible within our sensorial experience. We also have to take into consideration the fact that light occupies a physical space, traveling alongside different paths, finally touching our ocular cells. If we look at this phenomenon from the perspective of physics, the tangible nature of these works lies in the way that they are conceived by their creators and experienced by their viewers-users. 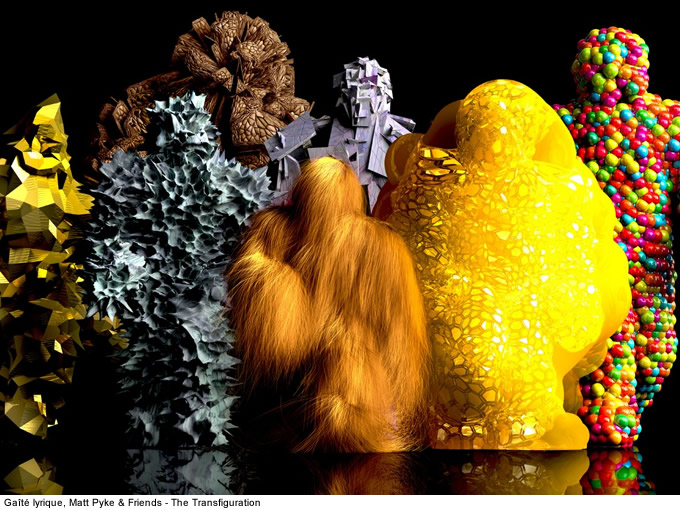 Discussions between the tangible and the virtual are typical of the digital dimension, yet this exhibition focuses our gaze so that we contemplate the works as unique pieces of art. This situation has been discussed from different points of artistic exercise and intellectual creation. Still, the exhibition does not attempt to allude to the critical debates that address the emergence of digital technologies in the arts. This show intends to introduce the viewer to a group of artworks that proposes the three characteristics of the digital display devices referred to in the title of the exhibition: Transparency, Fluidity and Mediation.

In this exhibition these terms are proposed as catalyzers, rather than as univocal determinants. The fluidity of the plasma screen, the transparency of the surfaces on which the video projections are made and the mediating capacity of graphic manipulation software, all of this allows us to appreciate how some of the works are located in an intermediate range between virtual conception and artistic mediation using technological devices. Moreover, these technological tools may well be mediators in the service of the arts or any other field of knowledge.

One things that has enabled the incursion of digital technology into contemporary artistic practice is the simulation of traditional mediums that can be emulated using digital applications. Software generates high-resolution images as impeccable as a painting on a canvas. Today works can be created through a wide range of digital devices; liquid, plasma and LED screens can serve as a substitute for the canvas. Display devices such as smartphones, tablets and micro-screens that circulate in our personal and work environments fulfill the role that was once carried out by the monitor; today, this action is fulfilled by mobile and video projection devices.

These devices not only offer the qualities of sharpness and immediacy in user perception. They also offer expanded horizons for artistic exploration, allowing creators to find in these media tools conceptual physical properties that allow them to reinvent their practices of imaging and visualizing.

The transparency of digital media provides creators with a new way of understanding the physical environment, and therefore screens and projectors confront both the artist and the viewer in a new perceptual dimension. Images appear on surfaces of a different nature, where the role of light can be understood as an action of mapping. Through projections images come to us in a different way. Various works appear through digital simulation devices and digital paintings, while sculptures exist as avatars. When we enter into the digital both objects and landscapes are sometimes created exclusively for such a dimension. 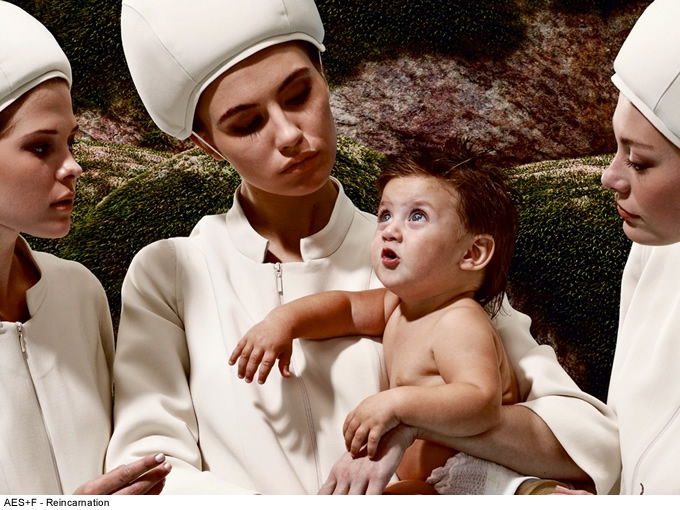 Digital resources also serve as mediators, not only is the digitally generated image configured as an immaterial work, for some artists it is a form of mediation between different actions. This is the case for Japanese artist Ryoichi Kurokawa, who mixes real-time images and sound in a single piece, through which he tries to change our perceptions of our everyday environments. The result is a performance that can only be witnessed in the space where his work is performed. However, thanks to digital technologies this performative work can be extracted and displayed outside the time and space in which the work was created. In the context of this exhibition his work syn_mod.2 is on display and is characterized by the orchestration of various abstract designs that are defined by the artist as an asymmetrical assembly of organized patterns.