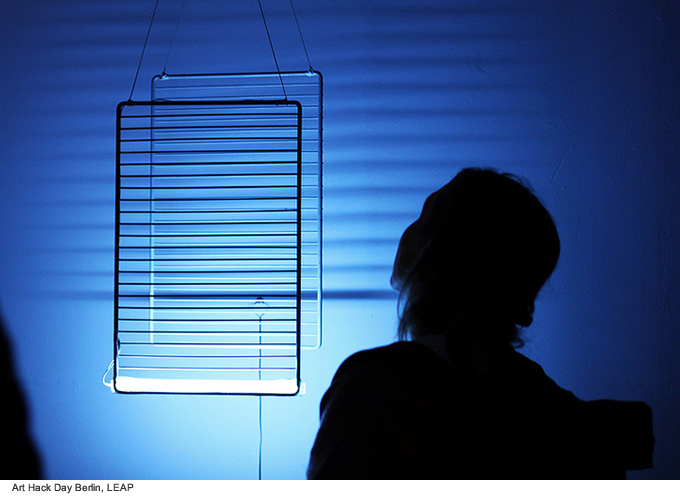 Between shiny high-tech, e-waste dumps, big data  businesses and mass surveillance schemes: under the title afterglow, the 27th edition of transmediale, for the third time with artistic director  Kristoffer Gansing, will explore  our present post-digital moment as one in which former treasures of our mediatised life are turning into trash.

The moment of afterglow describes both the positive and negative mental  after effects of drug use as well as the moment of deep twilight when the dust that has  risen from the earth  into the atmosphere is temporarily lit up.

transmediale 2014 afterglow adopts this psychedelic twilight moment as a symbol of today’s ambivalent condition  of digital culture – leaving behind the digital revolution and looking towards a future in which media technologies have become part of daily life, turning into physical and immaterial waste. International thinkers and cultural producers use the post-digital condition  between trash and treasure as a starting point to deal with some of the burning issues of today and to invent new speculative practices through exhibitions, performances, screenings and panels. 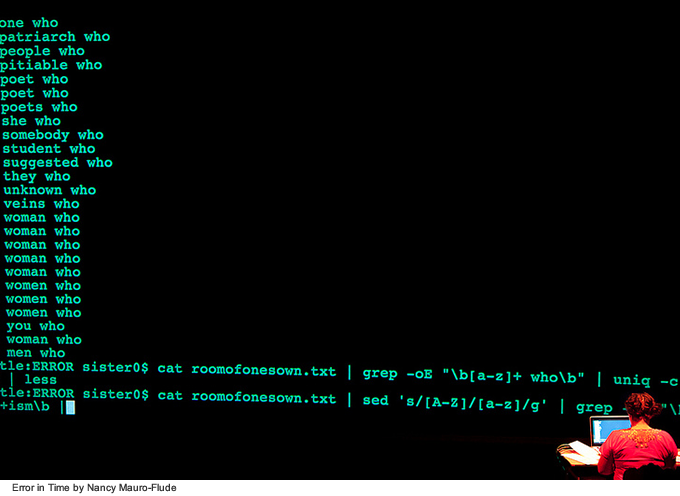 On the opening night, right after the ceremony, the second part of Art Hack Day Berlin will be made open to the public. Roughly 70 hackers from 15 countries will create a flash exhibition within 48 hours. The performances and presentations of this edition will respond to the outcomes of the first round that was produced by transmediale in cooperation with Berlin-based Lab for Electronic Arts and Performances (LEAP) in October this year. Under the title Going Dark, it focused on the impacts of information  overflow and possible reactions to it. With reference to the festival theme afterglow,  the second part engages with the current abundance of data  and hardware to develop critical reactions to the traces left by these phenomena in our post digital life.

Working within a new artist in residence programme by transmediale, supported by the Media Arts Section of the Canada Council for the Arts, Jamie Allen and David Gauthier are developing the installation CRITICAL INFRASTRUCTURE in workshops and public events.

Among the live performances experimental musicians Luke Fischbeck and Sarah Rara a.k.a. Lucky Dragons will show their multi media  work Actual Reality. Beginning with a simple Google search on the words “Actual reality”, the performance includes several intermedial elements like software, text, audio recordings and videos. In this piece, the duo will collaborate with Berlin-based guest musicians. 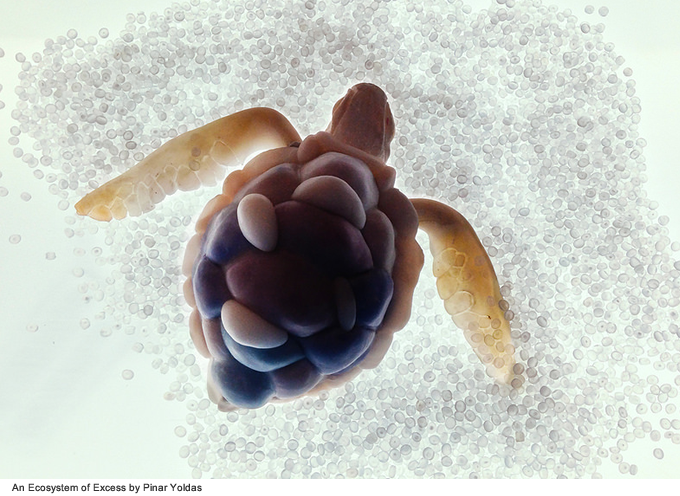 The screening programme features American film artist Luther Price who creates unsettling collages made out of old films, hair and scratches. Beside the opening installation Utopia, a dual slide projection, there  will be a special screening giving an overview on his oeuvre. Moreover, film collector Jack Stevenson will show an eclectic mix between “trash” and “treasure” from his collections, entitled Trash from Hell. From the thematic call for works, Louis Henderson’s Lettres du Voyant will be presented, thematising the reuse of e-waste and its connection to internet frauds in Ghana. Maha Maamoun’s Night Visitor shows the storming of the Egyptian State Security during the revolution that was extensively documented on YouTube.

As part of a special series of late night talks, James Bridle who coined the net culture term “The New Aesthetic,” will talk with net artist Olia Lialina about the interaction between analogue and digital in temporary politics and aesthetics. Within the scope of the same series, American artist Trevor Paglen together with British academic Ryan Bishop, will address the trash that is being produced by generations of discarded military technologies.

During the symposium, guest speakers will approach the afterglow phenomenon in panels and talks. Among them are philosophy, art and design theorist Benjamin  H. Bratton with the design duo Metahaven and the American documentary filmmaker Laura Poitras, who has  chronicled America’s drift from 9-11 to surveillance state. Together with Glenn Greenwald, Poitras brought to light the documents of the NSA affair.

The 15th anniversary edition of our partner festival CTM – Festival for Adventurous Music & Arts – will take place  from 24 January to 2 February 2014. Under the title Dis Continuity, CTM 2014 will focus on maverick music pioneers and the further development of their heritage in the current experimental and pop music scene. 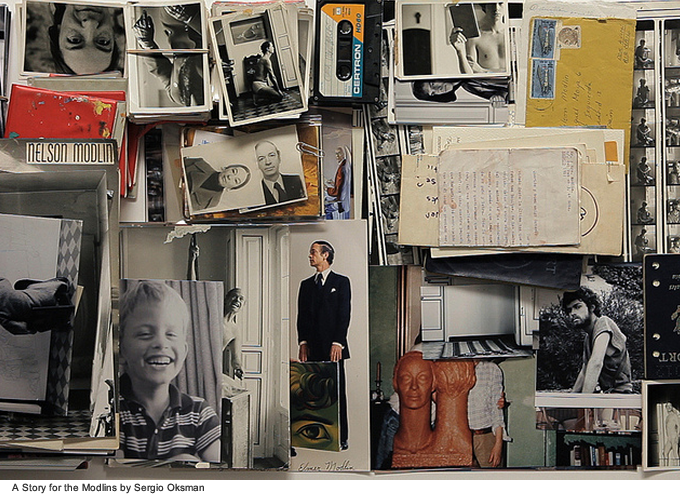 This year’s exhibition programme comes together through a hackathon inspired methodology where  the works are developed on site during the festival: In collaboration with Berlin-based Lab For Electronic Arts And Performance (LEAP) and Art Hack Day/ Olof Mathé, transmediale presents the second part of Art Hack Day Berlin. Following the first edition at LEAP, Going Dark, roughly 70 artists and hackers will create an instant exhibition within 48 hours according to the afterglow theme. In addition, artist talks, workshops and performances will take place  in the framework of the resulting exhibition.

Connected to Art Hack Day is Yami-Ichi an Internet Black Market organised by the century-old Japanese secret society of the Internet, IDPW. After several successful editions in its home  country, this market which trades in banned curiosities from the backstreets of the Internet  is making its European premiere with thirty vendors from Japan and Berlin. 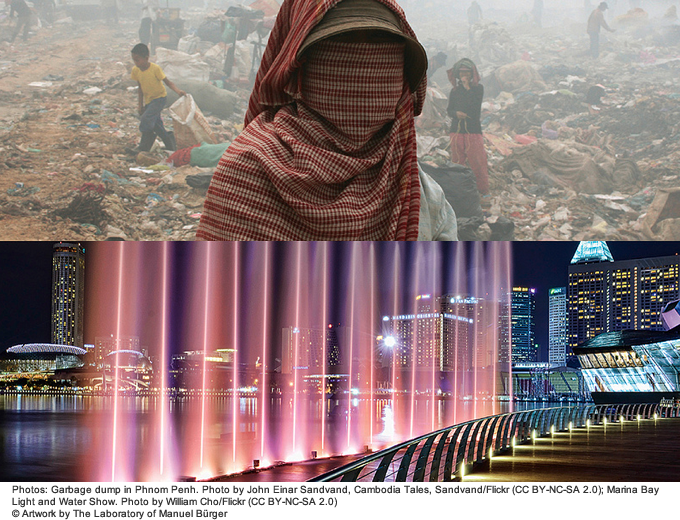 transmediale 2014 afterglow’s  performance programme focuses on audiovisual and inter-media pieces where technology is not the main focus, but rather the often intangible space between humans, objects, and systems.

Nurturing a longstanding partnership with CTM – Festival for Adventurous Music and Art, together the two festivals  constitute the world’s largest annual platform for reflection on the cultural significance of new technologies and digital culture.

In a special celebration this year, transmediale and CTM jointly bring their 2014 editions to a close with Robert Henke, known for his peerless Monolake productions. Henke will perform  the German premiere of his stunning new sound and laser show, Lumière, an exploration of the syncronicity and divergence of light and darkness and of slow movements and sudden bursts of motion and noise. The work elevates Henke’s  expertise as he commands three  powerful lasers to draw repeating shapes, ephemeral objects, and ultra short pulses of light in an improvised dialogue where  shapes create sonic events and vice versa.

Another German premiere presented together with CTM will be British artist Dinos Chapman, one half of the enfants terribles of British contemporary art, The Chapman Brothers, who will perform an audiovisual live show based on his acclaimed 2013 electronic music album Luftbobler. Chapman projects his short films on a triple-screen, marrying sound and visuals  in an eerie,  immersive and unforgettable experience. With insomnia cited as a source of its creation, the album and performance are a result of a decade of sonic and visual experimentation that was literally made in the afterglow. 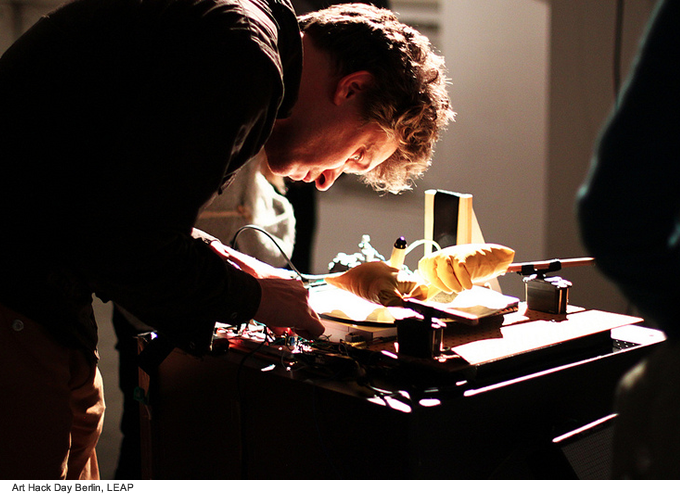 The conference of this year’s transmediale, curated by Tatiana Bazzichelli and Kristoffer Gansing in collaboration with Ryan Bishop, Jussi Parikka, Francesco Warbear Macarone Palmieri und Katrien Jacobs, takes afterglow as a metaphor for the present condition  of digital culture,  examining the geopolitical, infrastructural and bodily consequences of the excessive digitalisation that has  taken  place over the course of the last three  decades.

Central  motifs are mass surveillance, excessive big data  schemes, whistleblowing, the corrupt ecology of technological resources and the effects of digitalisation on identity and sexuality.

Japanese artist Sputniko! will thematise technology’s impact  on everyday life in a performative keynote, the panel  “The Chinese Dream: The Doctrine and the Sexy” will feature a discussion about attitudes towards patriotism, surveillance culture and body politics in the Chinese sphere with Sufeng Song and recorded interventions by Ai Weiwei and Ai Xiaoming.

Independent security analyst Jacob Appelbaum and documentary film director Laura Poitras reflect with artist and geograph Trevor Paglen on upcoming frontiers of action and awareness for hackers, activists and artists in the present context of geopolitical surveillance and control.

Sean Cubitt and Denisa Kera will talk about the effects of electronic and synthetic waste on geological and biological bodies, Bill Binney and Annie Machon deal with the question how the ethics of cypherpunk, whistle-blowing and investigative journalism are evolving into a hybrid form of civic resistance. 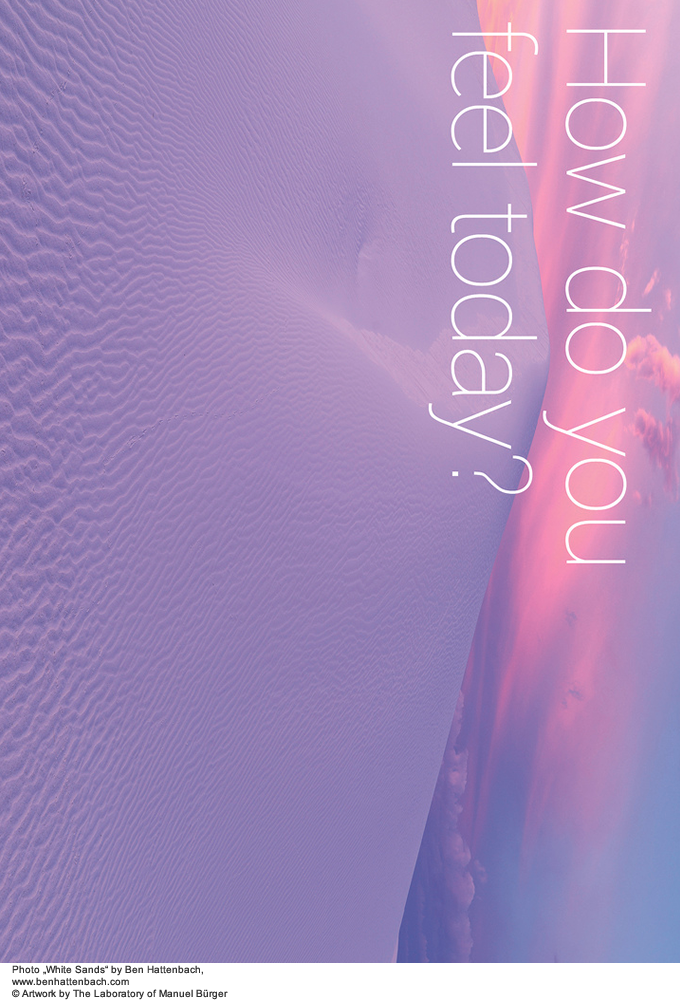 The films and videos  featured in transmediale 2014 focus on subjects such as the internet, surveillance, and Big Data as well as electronic, digital and analogue trash. The afterglow theme is seen as gloomy visions of the afterlife of images and technologies in which naïve dreams of a digital revolution, free exchange and equal  participation no longer have a place. A total of 53 films, videos  and slide shows from 1931 to 2013 are to be shown  in eight programmes and seven installations, each programme with its own sub-theme.

As in the previous years the Vorspiel pre-festival programme leads up to transmediale and CTM – Festival for Adventurous Music and Art, and features the best of Berlin’s experimental digital culture,  media  and sound art. Apart from institutional  partners of both festivals, the Vorspiel programme includes contributions from the transmediale and CTM reSource network of Berlin venues who have responded to the festival themes afterglow and Dis Continuity. Vorspiel takes place  from January 22nd to 28th, 2014 in a variety of Berlin-based organisations, galleries, independent project  spaces and other venues.

The Canadian writer and visual artist Douglas Coupland delivers  this year’s Marshall McLuhan Lecture on January 28, 2014 at the Embassy of Canada in Berlin. Following his iconic writings on the first digital workers Microserfs in the 1990s to the digital natives of JPod (2006), Coupland will outline his idiosyncratic view on life after the Internet  and what, not only the writings of, but also the medical condition of McLuhan  can teach us about it. Concurrently with the festival, Douglas Coupland will exhibit his series of post-digital Slogans for the 21st Century (2013) in an exhibition presented by Daniel Faria Gallery and transmediale at the Or Gallery Berlin.

Within the scope of the transmediale and UdK Vilém Flusser Residence for Artistic Research 2013 Turkish artist and researcher Pinar Yoldas has  developed a new work of speculative biology. The final outcome is presented by transmediale in cooperation with the Ernst Schering Foundation where the exhibition An Ecosystem of Excess will be on display from January 24 to May 4, 2014. The work introduces a fictive yet, as seen from the contemporary ecological situation, poignant vision of evolution where  new species have evolved out of the pacific trash  vortex, the immense plastic “soup” residing in the Pacific ocean. 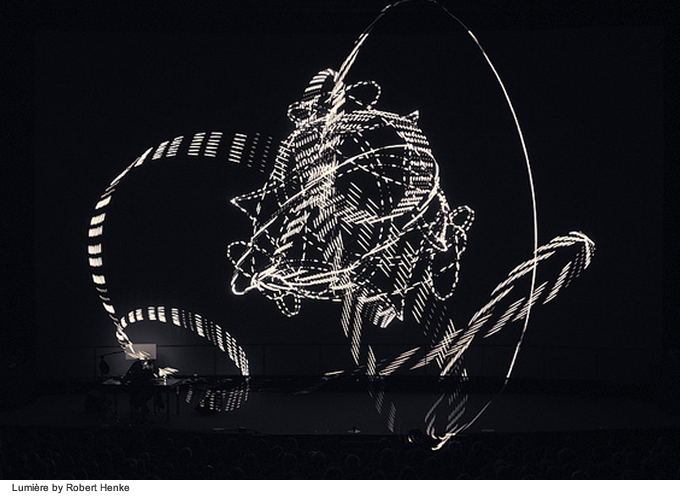 From January 24th  to February 2nd, 2014 the touring exhibition Schizophrenia Taiwan 2.0, curated by Pierre Bongiovanni, Chin-Wen Chang 張晴文, Chien-Hung Huang 黃建宏 und I-Wei Li 李怡衛 , brings works by emerging Taiwanese visual and media  artists to Berlin-based Balassi Institut – Collegium Hungaricum Berlin (.CHB). In their works the artists reflect on the paradoxical situation to simultaneously live before  and after the digital revolution.  The artworks give an insight into a society between tradition and post-digital awakening.

From January 17th to 31st, 2014 Gratis Projekt by Waschmaschinengruppe is to be seen at the studio of .CHB. Füsun Ipek’s and Bálint Liptay’s street and fleamarket finds become images of change, conquest and obstacles. In collaboration with Goethe-Institutes Sofia (Bulgaria), Ankara (Turkey) and Athens  (Greece) as well as the media  art project  ArtUP!, transmediale 2014 presents current media  art positions from South  East Europe from January 25th  to February 2nd, 2014.