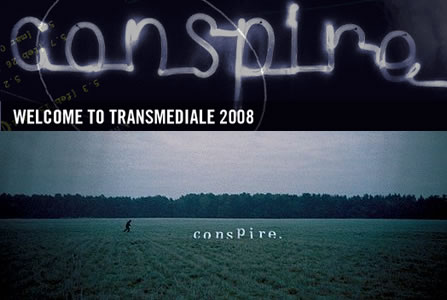 This year for the first time, the transmediale Award 2008, is being considered together with club transmediale (CTM). The prize is endowed with a total of 8,000 euros. Out of 1,116 entries from 57 countries 11 works were short-listed.

In order to reflect the growing number of theoretical and critical practice works submitted for the competition the festival is announcing the creation of the Vilem Flusser Theory Award. In collaboration with the recently opened Vilem Flusser Archive at the Universitaet der Kuenste in Berlin, dedicated to the complete works of the influential
visionary and media philosopher, the prize, endowed with 2,000 euros, honours outstanding theoretical or research based practice.

Emanuel Andel/5VOLTCORE (at) – knife.hand.chop.bot (Interactive Installation, 2007)
In this classic knife game a robot becomes the opponent in a match about trust, truth and fear.
http://www.5voltcore.com

Verena Friedrich (de) – ENDO (Installation, 2007)
A black box records every detail of its surroundings, but only reveals its own speculative presence.
http://www.tur-tur.net/

Francis Hunger (de) – The Setun Conspiracy (Performative Installation, 2005)
A mysterious Russian computer in the 1950’s challenged the binary system. Visitors may enquire about it, and the artist may provide some answers.

Julia Meltzer/David Thorne (us) Not a Matter of If but When (Video, 2006)
Remi Farah, a young Syrian performer recounts about a condition of uncertainty, stasis and chaos.
http://www.speculativearchive.org

Keisuke Oki, Minoru Sato, Naoyuki Arashi (jp) – Valve/Membrane (Performance, 2007)
The valve adjusts the flow of gas and liquid, setting off a chain of vibrations which are caught by the membrance … a mysterious entity
signifying a state of desire connecting body, city and society.
http://www.youtube.com/watch?v=e30xL1yiqoI

Gordan Savicic (at) – Constraint City: The Pain of Everyday Life (Intervention, 2007)
A corset equipped with high torque motors contracts and expands as the wearer navigates through wireless networks.
http://www.yugo.at

UBERMORGEN.COM and Paolo Cirio/Alessandro Ludovico (at/it) – Amazon Noir – The Big Book Crime (Web project, 2006)
Thieves of the invisible tricked Amazon.com’s ‘Search Inside the Book’ function …
getting away with the complete volumes of copyright protected books.
http://www.amazon-noir.com

Naeem Mohaiemen (bd) – Fear of a Muslim Planet: The Islamic Roots of Hip-Hop (2007/8)
Hip Hop and the visibility of Muslim artists offers a way to turn racist paradigms on their head. When rappers rhyme over the azaan or Quranic ayaats, mainstream society’s perceptions of an ‘alien’ religion are flipped.
http://www.shobak.org/text/hiphop-full.html

Simon Yuill (uk) – Intuitive Algorithms (2007/8)
Simon Yuill’s paper presents a comparison of experimental music collectives of the late 1960s, such as the Scratch Orchestra and the Black Artists Group of St Louis, with Free Software and related art practice.

4. DI/VISIONS. Culture and Politics of the Middle East
Talks, Discussions, Screenings
A project by Catherine David
7.12.2007 – 13.1.2008
House of World Cultures

In the Arab and Persian speaking Middle East, ‘the long twentieth century’ has undoubtedly been a century of imperial and civil violence, from the partition of Palestine, the struggles for independence, civil wars, and authoritarian forms of government to the First Gulf War of 1990. After the events of 9/11 2001, ‘war’ has become institutionalised
both as the dominant ‘reality’ of the Middle East and as the major frame through which the West perceives the region’s social and cultural productions – including of course, the War on Terrorism and on regional ‘autocracy’. In this first decade of the twenty-first century, artists in Iran, Iraq, Lebanon, Egypt, Palestine and Syria inscribe and reflect
on ‘war’ and discourses of war in ways that are both locally and globally inflected. This aesthetic plays on the tensions between history as lived social experience, the images and machines of conquest and violence, and the Western gaze. It is an aesthetic that constantly and deliberately crosses conventional boundaries of artistic media in order
to grasp the tragedy as well as the emancipatory potentials of the present situation both in and beyond the region itself, a zone that now stretches to the centres of European/Western capitals themselves through multiple experiences of exile and Diaspora.