The Book Sprint, an intensive and innovative methodology for the rapid development of books, is being hosted by transmediale, together with FLOSS Manuals in the run-up to the festival. Six people will be locked in a room in Berlin for 5 days to produce a book with the sole guiding meme being the title – Collaborative Futures. They will create the concept, write the book, and output it to print in 5 days. With Michael Mandiberg (New York), Mushon Zer-Aviv (New York), Mike Linksvayer (San Francisco), Marta Peirano (Berlin), Alan Toner (Berlin), and Adam Hyde (Berlin).

Two of this year’s transmediale partners and satellite locations will present exhibitions that will open just before the begin of the festival on the occasion of the Long Night of the Museums.

Coincidence Engines I and II – [The User] (ca)
The .CHB will host and co-produce an exhibition of the installations, Coincidence Engines I and II by Canadian artist duo [The User], who are nominated for the transmediale Award. The exhibition will open at the Long Night of the Museums on 30 January 2010. A special opening preview will take place at 17:00 that day. The Collegium Hungaricum Berlin was established in 1924 and re-opened its doors on historical grounds in Berlin-Mitte, Dorotheenstraße 12, in November 2007.
Over the course of the past two years the .CHB has emerged as an excellent centre for art and media within the cultural landscape of Berlin-Mitte. Since 2008 Collegium Hungaricum Berlin has been hosting projects on the intersection of art, science and research in close conjunction with transmediale. Corpora in si(gh)te, Transitland and the János Neumann Salon have been successful collaborations of both institutions.

During transmediale.10, the Instituto Cervantes in Berlin will host the exhibition of Award nominee Félix Luque Sánchez. His installation Chapter I: The Discovery will open as part of the Long Night of the Museums on Saturday 30 January, and run for the duration of the festival. A special opening preview will take place at 16:00 that day. The Instituto Cervantes is a cultural organisation concerned with spreading and promoting the Spanish language and culture around the world. The main purpose of the institution is bringing the excellence of the Spanish-speaking scene in terms of language, culture, arts, science and society to every corner of the world. 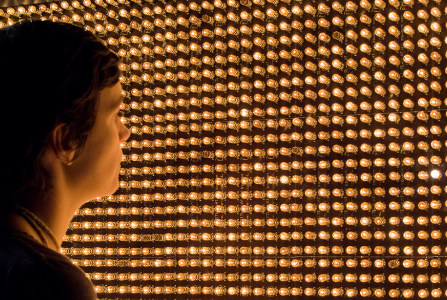 The transmediale.10 Performance programme presents a range of concerts and events acting as auditory and performative interrogations of FUTURITY NOW!. The highlight: six concert evenings in collaboration with CTM featuring some of the most important figures working within music and sound today. Each night new, and often rare, performances by Ryoji Ikeda, artificiel, Jürgen Reble & Thomas Köner, Atom TM and Feng Mengbo will represent the most experimental intersections of audiovisual culture and digital art. Charlemagne Palestine will open the festival with a special performance in the Tiergarten Carillon. Transmediale.10 Award nominees Sosolimited will unveil an entirely new work, a live coding performance of the Futurity Long Conversation. transmediale is also proud to present performances on the Café Stage at HKW. A world première of La Chambre Des Machines by Nicholas Bernier & Martin Messier, plus some of Berlin’s finest talents, such as Pe Lang und Benjamin Laurent Aman, will enrich each evening with sonic interpretations of our conditional future.