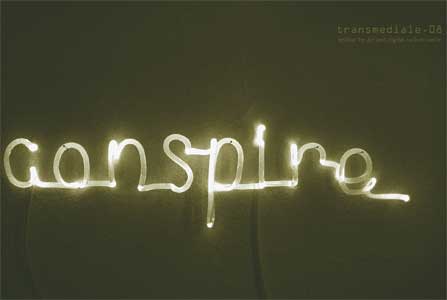 After two years as a guest of the Academy of Arts, transmediale.08 returns for its next edition in January/February 2008 to Berlin’s landmark House of World Cultures giving focus to digital technology as an intrinsic element of worldwide contemporary culture.

Under the theme CONSPIRE… transmediale.08 aims to hear from a broad range of artists, media activists and academics working within the realms of digital art and culture in ways which may be read as elaborating upon and challenging our understanding of collaborative and network practice. As such transmediale.08 looks to the cross-disciplinary tinkerers, utopian spelunkers, conspiratorial hoaxsters and stealth tacticians who question, subvert, undermine and bypass the unspoken rules, hidden codes of conduct and assumed truths entrenched within our information driven communication cultures and ideological belief structures.

Under its motto CONSPIRE…, transmediale.08 seeks to examine dubious worlds of story telling and remote opinion making, to look critically at the means of creative conspiratorial strategies, and use these to uncover new forms of expression and digital discourse.
The programme includes an exhibition to the festival’s theme CONSPIRE…, an extensive film & video programme, a several-day conference with international researchers, media activists and artists, a series of experimental performances and the award-ceremony. The salon programme invites to an exchange of ideas while the lounge offers previews of the film & video programme. Diverse external and partner events complement the programme.

CONSPIRE… the transmediale exhibition, guest- curated by Natas¹a Petres¹in-Bachelez, focuses on the strategic notion of the conspiratorial act. In poetic reference to the term’s Latin roots, conspirare, the exhibition deconstructs the nature of conspiracy into a silent and cosmic act of ‘collective breathing’ suggesting a sharply targeted, yet anonymous and intimate form of creative collaboration.

The works and projects chosen approach the perceptive borders of our daily lives with coded instructions, exploratory maps and speculative allusions which provoke alternative views about the way in which we understand information and what we believe to be universal truths. As such, thematic constructs around the notions of conspiratorial truths, bio-organic systems and twisted realities emerge from the contextualising clusters explored within the exhibition.
The exhibition, featuring many new works specially conceived for transmediale, will be shown at the exhibition hall and the studio gallery, and will be open through February 24, 2008. 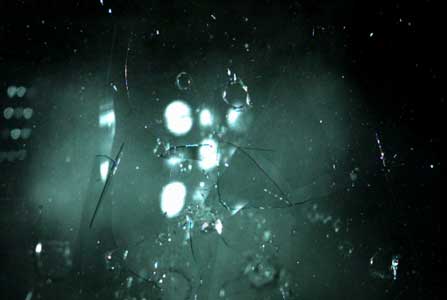 Long before a clandestine military-academic collaboration created the 1960’s ARPANET the speculative mechanisms of conspiracy theories have fueled global events. Much like our yearnings for desire, mystery and unpredictability, conspiracy is a human condition used to decipher the way in which we read an increasingly chaotic world of manipulated disinformation. The Internet and its associated Web 2.0 counterpart have begun to move beyond communal and user driven realms of information exchange towards mechanisms fuelling and fanning all forms of popular speculation.

They are indicative of a loss of control and a growing sense of surrender to perceived hidden forces and secret societies where mythologies of world domination, corporate control and government induced fear fetishism emerge. Examining the means with which we use and understand contemporary networks, be they digital or interpersonal, the conference will discuss the notions behind conspiratorial acts, structures and speculation, and consider the mechanisms therein as new forms of cultural, technological or political strategy.