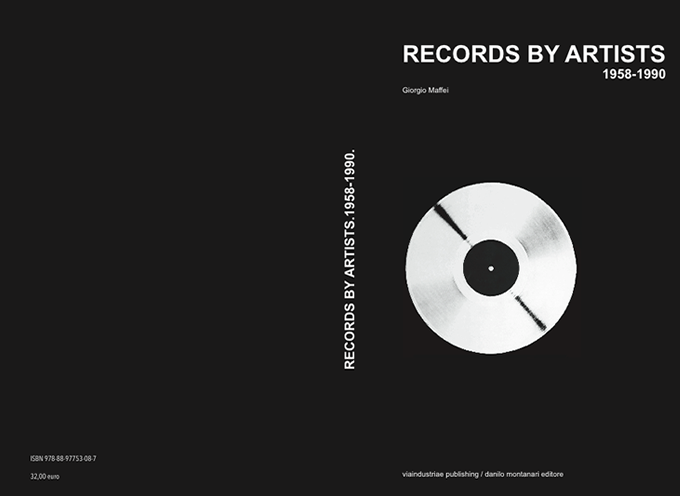 In 1977, Germano Celant published the volume OffMedia, Nuove Tecniche Artistiche: video disco libro. In this text, recognising the pervasiveness of the record in the contemporary artistic practice, Celant wrote: “In the art of the 1960s the record took its place alongside communications media such as video, the telegram, the photograph, the book and the film […] In line with the reductive theories of the period the record contributes to the isolation of one component of art work, sound, while on the other hand it enriches the array of linguistic tools available for the task of exploding the specifically visual and pushing back the limits of the art process”[1].

Among the media contemplated by Celant, the record already vaunted, in the late 1970s, a long (albeit maybe a bit underground) tradition. The historical avant-gardes, in particular Futurism and Dada, had intertwined with the universe of sound and music a critical and mutual relationship: if we only think to Luigi Russolo’s rumorismo, to Filippo Tommaso Marinetti’s words in freedom declamations and Sintesi Radiofoniche, to Raoul Hausmann, Richard Huelsenbeck and Hugo Ball’s phonetic poems, or to random compositions like Erratum Musical by Marcel Duchamp.

Nevertheless, there is no doubt that, since the beginning of the 1960s, the record became widely used by artists from the most diverse tendencies and backgrounds. It was, above all, with the postwar neo-avant-gardes – with their refuse of traditional media, of official exhibition venues, of the materiality of the artefact, and of disciplinary boundaries – that artistic experiences using sound and audio storage media “exploded”. The art world saw an expansion unseen before, welcoming cross-disciplinary practices, taking advantage of every means, and operating a complete redefinition of the artwork that, in many cases, lost its object-related reality to become pure aesthetic solicitation, process, action, or concept. Some of the modus operandi of the historical avant-gardes were re-actualised in an updated context, where audio technologies were already widespread, easily available and usable. 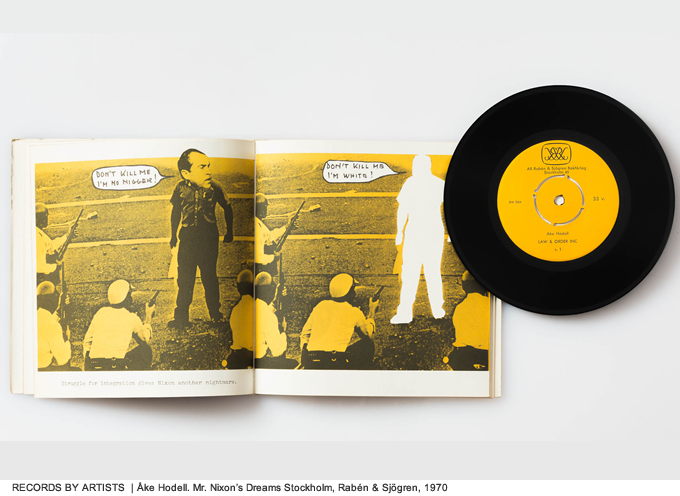 Thus, in such an interdisciplinary context of dematerialisation of the work of art, of  experiential and behavioural approach, visual artists’ explorations of music and expanded sound grew significantly. Poets and avant-garde artists gave birth to the wide field of sound poetry that, with reference to the phonetic experimentations of Futurism and Dada, let the words  implode into the sonic fact. In 1949, Yves Klein composed his Monotone Symphony, later recorded in 1960, consisting of a single note prolonged for twenty minutes followed by other minutes of silence[2]. Even an artist completely immersed in Informal Art and, thus, devoted to painting such as Dubuffet indulged himself to an incursion in the universe of sound with twenty Expériences Musicales (1960-61) which translated his Art Brut into Art Bruit: musical improvisations, initially realised with the Danish painter Asger Jorn, that, using the instruments in intuitive and non conventional ways, anticipated one of the approaches to current improvisation[3].

In Fluxus, then, musical projects were absolutely central and involved the majority of the group’s exponents: from composers such as La Monte Young, Giuseppe Chiari, Philip Corner, Nam June Paik, Walter Marchetti and Terry Riley, to artists with any musical education such as George Brecht, George Manciunas, Dick Higgins, and Robert Rauschenberg, many of which had attended John Cage‘s classes at the New School for Social Research in New York.

During the same years, sound often became a vehicle for the exploration of the body or of the possibilities of verbal and non-verbal expression for artists related to performance art, like in Joseph Beuys’s Ja Ja Ja Ja Nee Nee Nee Nee (1969) – recorded during the exhibition When Attitudes Become Form curated by Harald Szeemann at the Kunsthalle in Bern – or in Marina Abramovic’s performance Rhythm 10 (1973), in which the sound of the cuts that the artists inflicted on herself with a series of knives was documented and reproduced by two tape recorders. During the same years, Bruce Nauman recorded Record (1969) experimenting simple and anti-virtuoso gestures on the violin, while Roman Opalka recorded his voice meanwhile he enacts the numbers that, at the same time, he writes on the canvas. 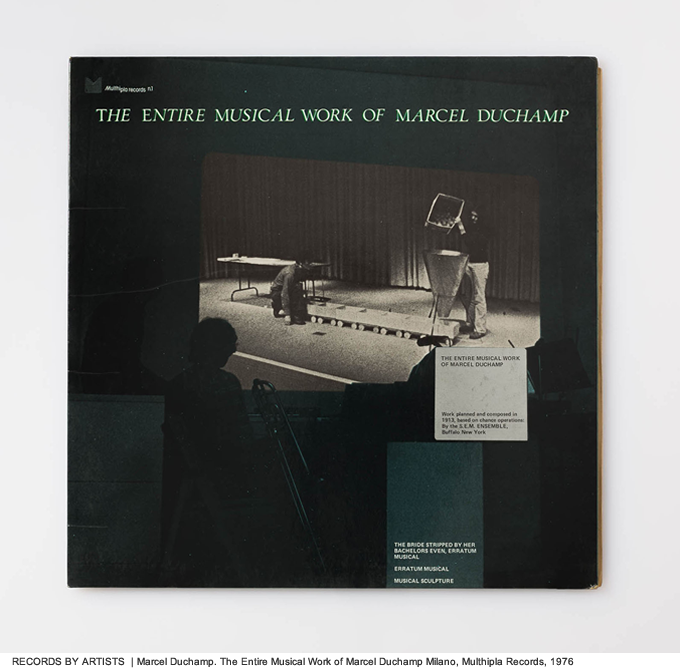 Since the late 1970s, researches on the border between art and music proliferated, as in the case of Laurie Anderson, Christian Marclay, Brian Eno, or The Poetics (band composed by Mike Kelley, Tony Oursler, and Jim Shaw): artists that wandered nimbly from the art gallery to the stage, often reaching a wide popularity, definitely far from the underground circuits.

In face of this increasing importance of audio storage media in art, and after more than thirty years from Celant’s text, in Italy such heterogeneous, tentacular and liminal panorama of projects has remained almost unexplored. Records by Artists (1960-1990) – an exhibition curated by Giorgio Maffei at the Biblioteca Universitaria in Bologna during Artelibro 2013 – aims to create the basis for a wide-ranging exploration of these practices. It makes  this in cataloguing and encyclopaedic ways, and through a clear circumspection of the area of investigation.

The exhibition, in fact, originates from a research project that lead to catalogue 800 records by artists, later published in the homonym volume issued by Danilo Montanari Editore and VIAINDUSTRIALE edizioni[4]. About 300 pages that document an important part of artists’ vinyl production (other supports such as tapes and CDs are excluded) during three decades through sheets sorted alphabetically that reproduce the record cover and the record notes of each piece. 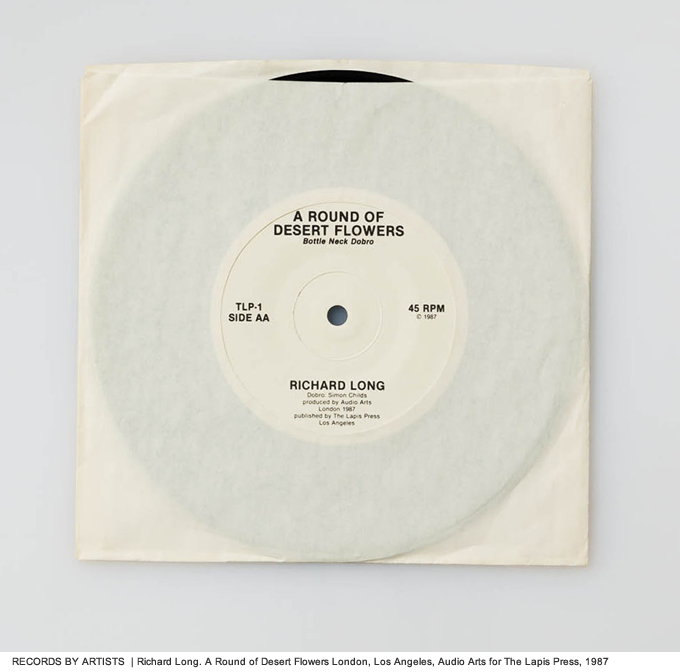 The collection ranges from Sound Environment Sea, an album of field-recordings  by Marina Abramovic (1972), to conclude with the famous The Well-Tuned Piano (1987) and The Theatre of Eternal Music by La Monte Young, passing through performance artists such as Güinter Brus and Valie Export, sound poets such as Henri Chopin, conceptual project by Art & Language, Hanne Darboven, Dan Graham and Jan Dibbets, and composers such as Robert Ashley, Charlemagne Palestine and Steve Reich. Obviously, there are also some of the names traditionally connected to the horizon of expanded sound such as Christina Kubisch, Terry Fox, Christian Marclay, Maurizio Nannucci, as well as  sections dedicated to collections, compilations and magazines – including REVUE OU and the multimedia magazine ASPEN, that during the last two years have been at the core of important monographic exhibitions[5].

The exhibition presents a selection of 130 vinyl records in a minimal display setting, which places the records and the covers on the reading tables of the massive Aula Magna of the Library. The curatorial statement follows the catalogue principles through an alphabetical order of the records that doesn’t aim neither to an historical or chronological reconstruction, nor to a taxonomical categorisation based on tendencies, operational modalities or disciplines. Instead, the purpose is creating, as the curator claims, a “catalogue raisonné”[6].

Hence the approach isn’t historiographical, critical, or theoretical. Rather, it is a methodical and classificatory project, which tends, in a heuristic way, to build a corpus of oeuvres based on medium-specificity (the use of the record as a support) through a wide-range investigation into the international arts practice, and that takes into account, while making it its own, also the problematicity of the same definition of “record by artist”. The exhibition is indeed a proper collection that, from the one hand, recalls the object of investigation (the record: collecting object par excellence) and, on the other, to the book and the catalogue. 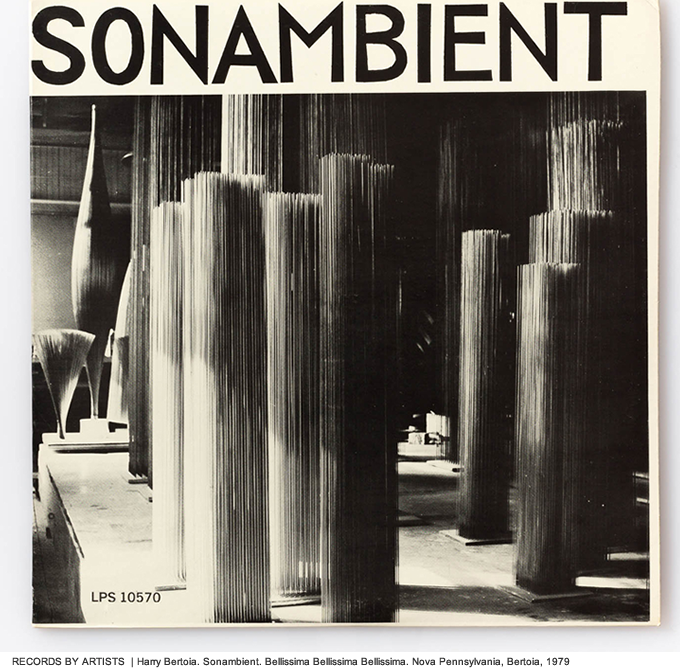 According to Victor Stoichita, the catalogue “consists of a deployment following to an order (kata-logos). […] Unlike the inventory, a diachronic instrument, the catalogue is a synchronic fact. Any group of objects could be part of an inventory, but only one limited category allows (or requires) the catalogue: the collection”[7]. In the case of Records by Artists, it is probably this circular relation (almost an overlapping one) between collection, catalogue and artworks on display that determines the main limit of the exhibition. In fact, differently from some previous Italian and international exhibitions on records, Records by Artists is not focused on the relationships between art and graphic design of the covers. And, for this reason, the fact that this important collection cannot be listened to significantly limits the fuition. In the book-catalogue the curator recalls, “The record by artist is not the explanation or the documentation of a sonic artwork. The record is the artwork”[8].

A work of which the cover and the apparatus are without a doubt an integral part, but that in any case is intended to come to life through listening. On display, instead, the only track diffused in the exhibition space is Parole / Mots / Words / Wörter by Maurizio Nannucci, a cut-up of voices and discourses published in 1976 and re-designed for this occasion, while in the other cases we can only experience the audio storage media – we may even say – instead of the artwork itself.

Also this choice seems to reaffirm the “catalo-graphic” character of the entire project. A project that, on the one hand, has the great merit of contributing to build a wide corpus of works and fertile lands for the investigation of this interdisciplinary and branching field, and, on the other, (re)launches to further explorations that may permit a direct drive on the present time. A present where, accomplice also a more generalised “techno-nostalgia”, the record is back in the spotlight of contemporary arts. 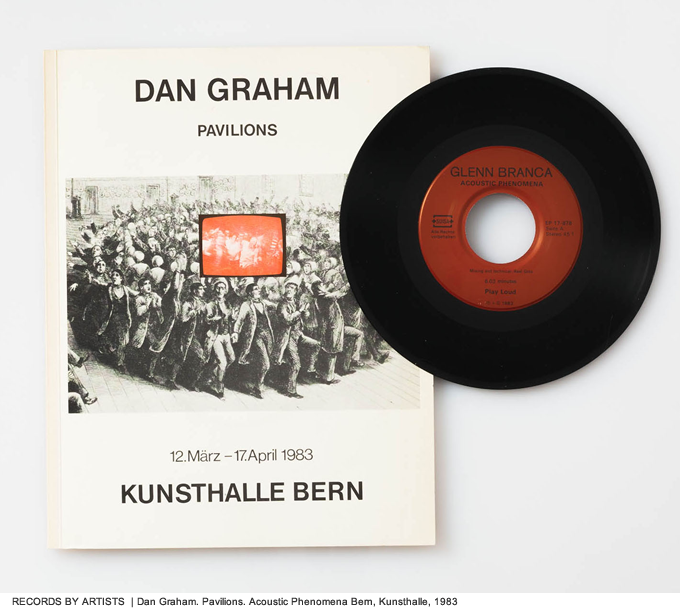 [2] – An extract on Ubuweb: http://ubumexico.centro.org.mx/sound/klein_yves/Klein-Yves_Monotone-Symphony_Excerpt.mp3 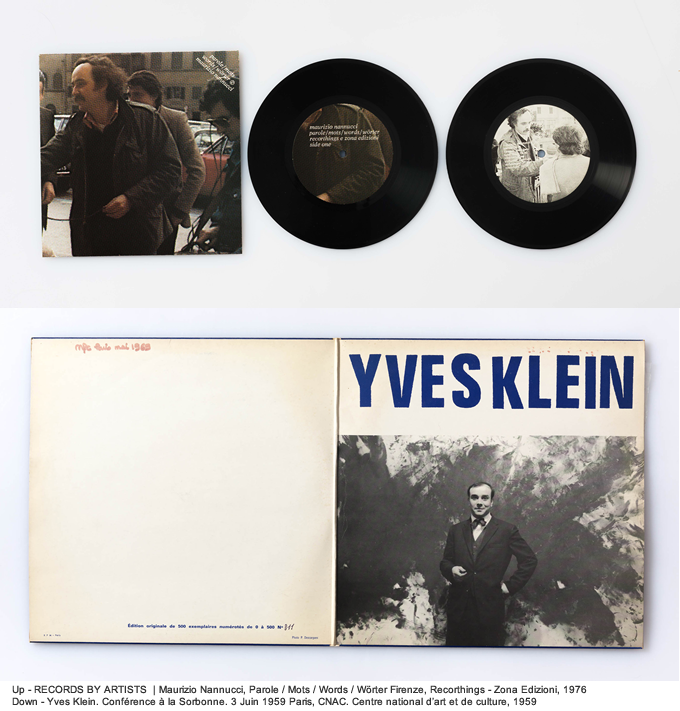