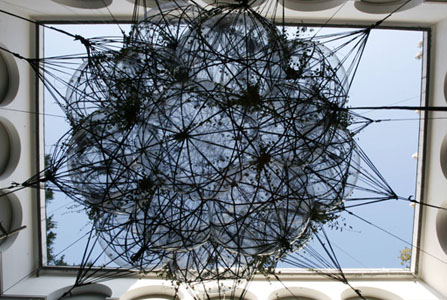 Artist Tomás Saraceno follows the tradition of those who have looked up to the sky to envision works of uncommon optimism that explore systems of interdependencies, both inside and beyond the natural world. The Walker Art Center exhibition “Tomás Saraceno: Lighter than Air”, organized by Walker curator Yasmil Raymond, showcases installations, sculptures, and photographs from 2003 to the present.

Inspired by the ecological philosophy of Félix Guattari and the visionary thinking of architects and theorists such as Buckminster Fuller, Peter Cook, and Yona Friedman, Saraceno has drawn on principles of architecture, engineering, and physics to create walk-in environments, kinetic sculptures, floating gardens, and solar-powered balloons that bring together a variety of ecologies-environmental, psychological, and social-to propose new platforms and vehicles for inhabiting the world.

Conceived by the artist as an entire organism, Lighter than Air closely integrates the works on view, formally and structurally, to render a network of relationships, as well as illustrating the breadth of his practice. The exhibition’s design is inspired by the ecological theories championed by physicist Fritjof Capra, who argued that “Throughout the living world, we find systems nesting within other systems. And living systems also include communities of organisms.

These may be social systems-a family, a school, a village-or ecosystems. The exhibition integrates indoor and outdoor spaces throughout the Walker building, including staircases and hallways, with a network of electrical cables connected to solar panels oriented towards existing light sources. Electricity generated through this web of cables, receivers, and generators will cultivate the grass growing inside “32SW stay green/Flying Garden/Air-Port-City” (2007), a self-sustainable greenhouse equipped with an irrigation system that waters a cluster of inflatable spheres. 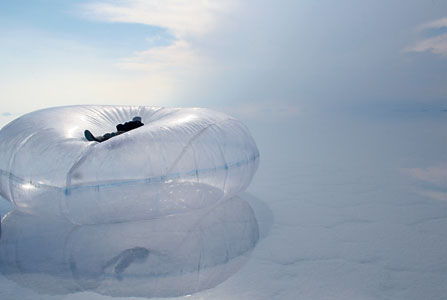 The centerpiece of the exhibition is the sculpture “Girasol (Turning Sun)” (2009). Conceived for both the gallery and an adjacent outdoor terrace, it plays up the interdependencies between the sun, the wind, and technology. A wind turbine located on the terrace will power a video camera attached to a sunflower as it records intermittent views of the sky and the flower’s movement as it searches for sunlight. The captured images will be projected inside the gallery. Foregoing the practical and the plausible, Saraceno seeks to harness the power of imagination-his own and the viewer’s-to make a leap together into forms and vehicles that render the impossible possible.

Also on view will be photographs as well as a wall-sized drawing, “Air-Port-City” (2009), depicting the artist’s vision for an airborne metropolis floating above an earthbound city. Intrigued by the question of national borders, Saraceno has designed an urban setting where residents circumvent geopolitical boundaries, challenging notions of nationhood, land ownership, and borderlines. As the artist has said, “My idea for an Air-Port-City is to create platforms or habitable cells made up of cities that float in the air. These change form and join together like clouds.

This freedom of movement is borrowed from the orderly structure of airports, and it allows for the creation of the first international city. . . . Air-Port-City is like a flying airport; you will be able to legally travel across the world . . . . This structure seeks to challenge today’s political, social, cultural, and military restrictions in an attempt to re-establish new concepts of synergy.”