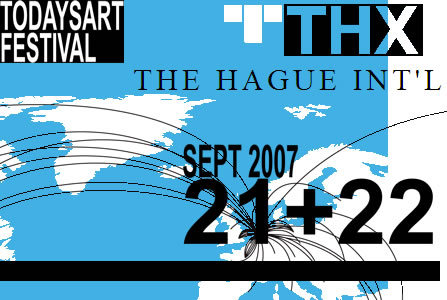 The TodaysArt Festival, which takes place during the evenings and nights of 21 and 22 September in the centre of The Hague , is once again bringing a whole range of innovative and groundbreaking acts to the Netherlands.

The third editions of the festival takes place at more than 25 locations in the city centre, both in- and outdoor. The program consists of more than 200 acts and artists from more than 25 countries. With major acts such as Nôze, Array, Daan Roosegaarde and Robert Henke, the TodaysArt Festival puts The Hague on the international map as the stage par excellence for contemporary creativity.

This is the list of the other names confirmed: www.todaysart.nl/2007/artists.php#

For two days, the city centre of The Hague will function as one big festival terrain, with performances both in the public domain and several stages indoors. Installations, projections and acts use the city centre as a stage and will transform the city into an inspiring bulwark of audiovisual experiences.

The essence of the festival line-up is the vision of the artists, who will present their interpretation on contemporary creativity in areas such as music, video and visual arts, film, photography, fashion, performance art, theatre, modern dance and many other disciplines and collaborations. The festival does not only present new art, but also focuses on established pioneers who enter into a dialogue with contemporary society. Furthermore, TodaysArt provides a podium for artistic expressions that enter into a dialogue with the present-day society: art with a conscience and a mission.

In the search for the essence of contemporary creativity both creative and geographical boundaries need to be crossed. Because of this, the festival line-up always had a large international component in the previous editions. This year, the festival goes a step further by showcasing the most talked about talent from several important European creative clusters that have a worldwide influence on contemporary creativity. Our French, German, British and Detroit programmes provide a strong selection of the leading artists in the local creative scenes.

The dance group Array drags the spectator into a surreal and dark dream with the unparalleled performance Outre. Influenced by David Lynch and Chris Cunningham, choreographer Darren Johnston created this powerful performance which is accompanied by pounding beats and raw industrial house music, created by artists from the famous IDM-label Warp. Amongst other artists, Thomas Jenkinson, aka Squarepusher, wrote music for this act. Five ghostlike dancers, shouted at by an MC from hell, move through a dark and monstrous world, a cabaret of shadows and nightmares. Outre is a dancing voyage of discovery through the dark clefts of the human soul.

Daan Roosegaarde, a young sculptor and architect, uses his work to explore the dynamic relationship between architecture, people and new media. His sculptures are a confrontation between man and technology and create situations in which man and public space temporarily fuse, becoming one entity. At the TodaysArt Festival, Roosegaarde’s newest installation, Flow 5.0, will be unveiled to the public for the first time. Flow 5.0 consists of hundreds of fans that respond to movement. The installation enters into a futuristic relationship with the body of the person who walks through it, in which the installation and the person can influence one another. Roosegaarde will also exhibit Dune 4.0, an interactive landscape consisting of hundreds of fibres. These fibres respond to sound and movement with patterns of light. Dune 4.0 is a hybrid of nature and technology and engages into a futuristic relationship with its environment.

Robert Henke, famous as Monolake for his techno productions and as one of the developers of the world famous music software Ableton Live, is an inconceivably talented person. At the TodaysArt Festival you will get the rare opportunity of seeing two of Henke’s most famous projects in the Lutherian church: Linear Grid and Layering Buddha. Linear Grid is an installation which enables the user to break through the constraints of time and space with sound. During the performance someone else, at a completely different location on Earth, is linked to the performance through an identical installation. Layering Buddha is an installation based on the Buddha machine, a little sound apparatus from China . At his performance, Henke will guide the visitor, who is invited to stand in the middle of a ring of speakers, through his bizarre ec(h)osystem.

TodaysArt considers collaboration in the creative field of paramount importance. Every year, this results in unique connections leading to innovative and remarkable productions.

The Royal Academy of Art (KAKB) in The Hague

One of the biggest partners of the TodaysArt Festival, the Royal Academy of Art in The Hague, celebrates it’s 325 th anniversary this year with a whole range of pioneering projects: the faculties of the academy work on the cutting edge of art and push back the frontiers of the creative imagination, leading to several unique productions. For instance, the interfaculty of Image and Sound/Artscience, gives a unique presentation in the Atrium, for which the theme will be movement. The department of Textile and Fashion arranged 120 models to present its collections in the Public Library. Another project, from the faculty of Performance Art, is Pelagic Zone II from the Icelandic artist Helgi Kristinsson. Helgi immerses people in the Schoolstraat with images and sound from underground speakers and television sets which serve as streetlights.

Together with the TodaysArt Festival, Boomerang, famous for its free postcards, organised a design contest, inviting students and anybody who felt creative to design a postcard. The winning design will be magnificently displayed during the festival, together with other famous Boomerang designs.